Bilibili expects its revenue to rise 48% to 51% year over year in the fourth quarter, which matches analysts' estimates and implies its full-year revenue will increase 61% to 62%. However, the company also proposed a new offering of $1.4 billion in convertible senior notes, which will mature in 2026. 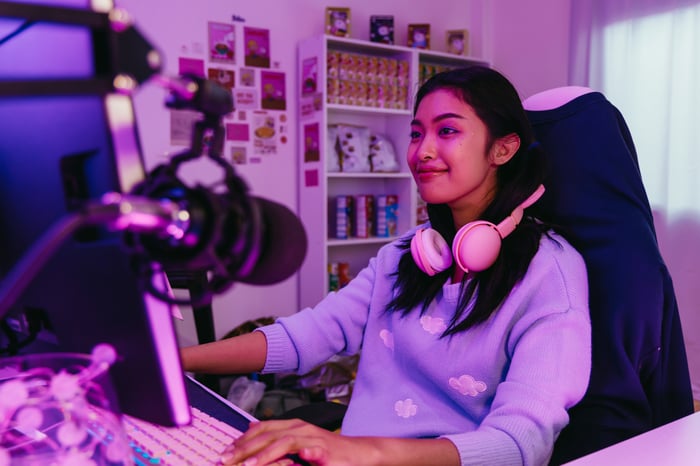 That big debt offering -- along with Bilibili's widening losses and the unpredictable regulatory headwinds facing its gaming business -- likely sparked its post-earnings sell-off.

Alibaba's disappointing earnings report likely exacerbated that pain for two reasons: Bilibili's e-commerce business is tethered to Alibaba's Taobao marketplace, and Alibaba is widely considered a bellwether of the Chinese tech sector. But is that sell-off creating a buying opportunity for investors who can tune out the near-term noise?

Bilibili generated 28% of its revenue from its mobile gaming business in the first nine months of 2021. That's down significantly from 71% of its revenue back in 2018, and reflects the ongoing expansion of its streaming video, advertising, and e-commerce businesses over the past three years.

It generated 37% of its revenue from its value-added services (VAS), which include its sales of virtual gifts and subscriptions for live streamers. It generated another 22% of its revenue from ad sales. and the remaining 13% came from its "e-commerce and others" segment, which mainly sells tie-in products for anime, comics, and gaming (ACG) content.

Here's how those four core businesses fared over the past two years:

Bilibili's gaming business, which publishes hit games like Fate/Grand Order, generated robust growth throughout the pandemic as more people stayed at home. But this year, the segment's growth decelerated as those tailwinds weakened and the Chinese government tightened its playtime restrictions for minors while throttling its approvals of new games.

But during the conference call, Bilibili's CFO Xin Fan said the company still generated "less than 1%" of its gaming revenue from players under the age of 18, and that several of its new games had been approved and were "ready for domestic release in the coming quarter."

Its VAS revenue continues to rise as more viewers tune in for streams of popular video games like Tencent's League of Legends. Its advertising revenue also continues to soar as more brands target its core audience of Gen Z consumers. During the conference call, Fan said Bilibili's native video ads made it the "most sought-after platform in China for advertisers."

Lastly, its e-commerce business continued to expand as it peddled more tie-in merchandise to its sticky audience of ACG fans.

That audience is still growing

Its number of "official" members -- who must pass a 100-question exam on ACG content to gain additional perks -- increased 38% to 133.6 million. All four of those metrics have constantly improved over the past two years:

But what about its financial discipline?

Bilibili's top-line growth is impressive. But in the first nine months of 2021, its gross margin fell 150 basis points year over year to 21.7%, its operating loss nearly doubled, and its net loss more than doubled to 4.71 billion yuan.

That's an alarming loss for a company that ended last quarter with just 10.47 billion yuan in cash and equivalents, and analysts expect even steeper losses next year.

That's why it wasn't surprising to see Bilibili propose a new $1.4 billion convertible debt offering, but it already raised cash with big stock and debt offerings before. As a result, its number of outstanding shares (on a weighted average basis) has risen more than 60% since the end of 2018, while its debt-to-equity ratio increased from 0.45 to 0.81. That ratio is still manageable, but it will likely climb to about 1.2 after its newest offering.

Should you buy Bilibili?

Bilibili's core businesses are strong, and its stock looks cheap at six times next year's sales. Unfortunately, its declining gross margins, widening losses, and rising leverage -- as well as the regulatory challenges for all Chinese tech stocks -- are all preventing me from buying this unpredictable stock.