The off-price retail giant may have unduly alarmed investors with its fourth-quarter forecast. 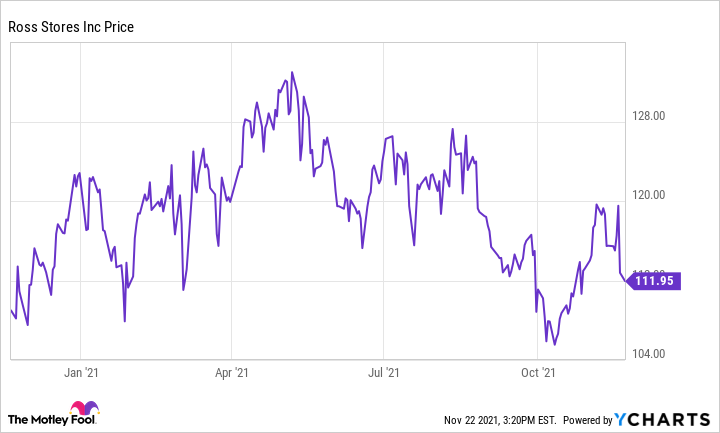 In the first half of fiscal 2021, Ross Stores capitalized on strong pent-up consumer demand and the easing of the COVID-19 pandemic. Sales surged 20% compared to the first half of 2019 -- reaching $9.3 billion -- on a 14% increase in comparable store sales. That drove a double-digit increase in earnings per share (EPS), which rose to $2.73 from $2.29 two years earlier.

The No. 2 off-price retailer continued its sales momentum last quarter. Compared to the third quarter of fiscal 2019, total sales rose 19% to $4.6 billion on a 14% comp sales gain. This beat the analyst consensus by more than $200 million. Ross shrugged off analysts' concerns about inventory shortages, digging into its ample stock of "packaway" merchandise: items bought at deep discounts near the end of a season and stored for the following year.

Headwinds from surging freight costs and rising labor costs did pinch the company's profit margin last quarter. But thanks to the tailwind from strong sales growth, EPS improved to $1.09 from $1.03 two years ago. This crushed the analyst consensus of $0.78.

Don't worry about the guidance

While it reported strong results for the third quarter, Ross Stores warned that margin pressure would ramp up in the fourth quarter. As a result, while management estimated that comparable sales would rise 7% to 9% relative to Q4 2019, it projected that EPS would fall from $1.28 two years ago to between $0.83 and $0.93 this quarter.

Investors shouldn't worry about this forecast. Ross has a long track record of issuing extremely conservative forecasts. For example, three months ago, management predicted that comp sales would rise 5% to 7% and EPS would range between $0.61 and $0.69 in the third quarter. Ross Stores ultimately grew comparable sales twice as fast as the high end of its guidance range, while EPS beat the high end of its guidance by 58%.

Analysts typically try to adjust for this conservatism by predicting that the company will modestly beat its earnings forecasts. However, Ross Stores' EPS has crushed the analyst consensus by at least 40% for three straight quarters. Ross has a good chance at beating its fourth-quarter forecast and at least matching its Q4 2019 earnings, too.

Investors appear unduly concerned about inflation in supply chain and labor costs causing permanent margin contraction for Ross Stores. During the company's recent earnings call, CEO Barbara Rentler indicated that Ross has had success raising prices on some (but not all) items to help offset higher costs. Moreover, the retail industry disruption of the past two years gives the company massive potential to expand its market share and offset higher costs by increasing the productivity of its stores.

Management still sees room to grow the combined store count for its two retail concepts (Ross Dress for Less and dd's DISCOUNTS) from 1,924 stores today to at least 3,000 units over time. The company plans to open about 100 stores annually for the foreseeable future.

Even if Ross Stores' operating margin never returns to its pre-pandemic peak, the company is well positioned to drive double-digit long-term EPS growth by growing comp sales, adding new stores, and buying back stock at a steady pace. That makes Ross Stores stock look like a great bargain for patient investors.

Should You Ring the Register on This Bargain-Bin Retail Stock?

Why Ross Stores Stock Was Up 10% This Week

Why These Retailers' Stocks Fell This Week
401%