Seth Klarman, the billionaire CEO and portfolio manager of The Baupost Group, is arguably one of the greatest value investors of all time. It shouldn't be a surprise that he's provided value investors with plenty of nuggets of wisdom over the decades.

One of Klarman's most concise and meaningful quotes about value investing came when he said: "Stock market efficiency is an elegant hypothesis that bears quite limited resemblance to the real world."

In other words, value investing is built around the entire belief that the market isn't always right in valuing stocks. As proof of this belief, let's look at a few reasons why I believe pharma stock Merck (NYSE:MRK) is one that value investors can't afford to pass up. 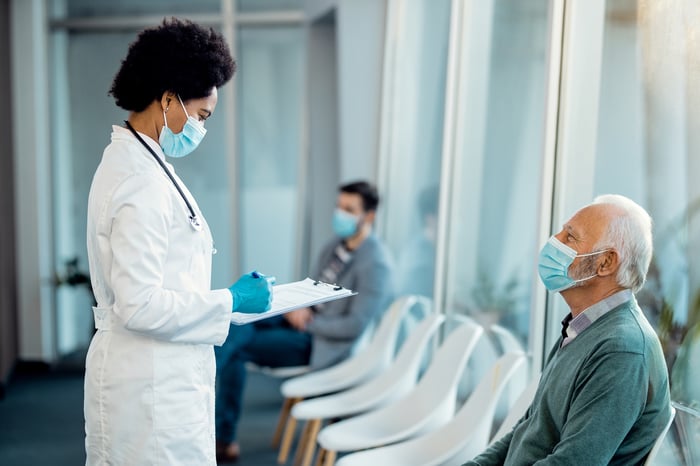 Pharmaceutical giant Merck delivered a tremendous quarter for its shareholders, easily topping analysts' forecasts for the period, which ended Sept. 30. The company generated $13.2 billion in total revenue for the quarter -- a whopping 20.4% increase over the year-ago period -- and comfortably higher than analysts' consensus estimate of $12.3 billion.

Predictably, Merck's blockbuster product, Keytruda, figured prominently. The top-selling cancer drug in the world grew its revenue 22% year over year to $4.5 billion. That represents just over one-third of Merck's total revenue in the third quarter.

Another third of revenue came from Merck's vaccine and animal-health businesses, which combined were up 27.7% to $4.6 billion in the quarter. Notably, these two segments together were able to grow faster than Keytruda, accounting for 45.1% of Merck's overall revenue growth in Q3 vs. 36.8% for the cancer drug.

Jumping over to the bottom line, Merck produced $1.75 in non-GAAP earnings per share (EPS) during the third quarter -- a 28% spike compared to the year-ago period -- and it also exceeded analysts' forecast of $1.55.

Merck's robust performance both in the third quarter and year to date prompted management to raise its guidance. Non-GAAP EPS guidance for this year was upped from a midpoint of $5.52, which the company predicted in July, to $5.68 as of last month's report.

A safe dividend with room to grow

At its current share price of around $83, Merck pays a market-beating 3.1% dividend yield to shareholders. But could that yield be too good to be true, considering that the S&P 500 is now paying less than 1.3%?

Based on Merck's annual dividend per share of $2.60 and non-GAAP EPS guidance of $5.68, the stock's dividend payout ratio of about 45% appears to be very sustainable. It not only provides Merck with a cushion to maintain its payout in the event of a challenging period, but also gives the company plenty ability to increase the dividend.

Since analysts are expecting 14.5% annual earnings growth over the next five years, Merck should be able to hand out at least high single-digit dividend increases for the foreseeable future.

Is the market too pessimistic?

Merck is priced at a forward price-to-earnings (P/E) ratio of just 11.4, which is basically in line with the drug industry's average of 11.3. However, the stock arguably deserves to be priced higher, given that its forecast earnings growth over the next five years is higher than all but three of the 19 other stocks in the industry average.

One important investor concern about the stock may be the looming 2028 patent expiration of Keytruda in major markets. However, the company is more than its crown-jewel cancer drug, as evidenced by the healthy growth in its world-class vaccine and animal-health segments. That's precisely why I believe that fears of Merck's post-Keytruda future are overblown, and there is an opportunity for contrarian biotech investors to buy before the market wakes up and the stock surges.