Shares of Faraday Future Intelligent Electric (FFIE -9.87%) had fallen 6.2% at 11:42 a.m. ET after the high-end electric vehicle (EV) upstart announced it had received a delisting notice from the Nasdaq exchange after failing to file a quarterly earnings report in a timely fashion.

The company said it expected the letter because it had formed a committee of the board of directors to investigate claims made by a short-seller as well as allegations of "inaccurate disclosures." 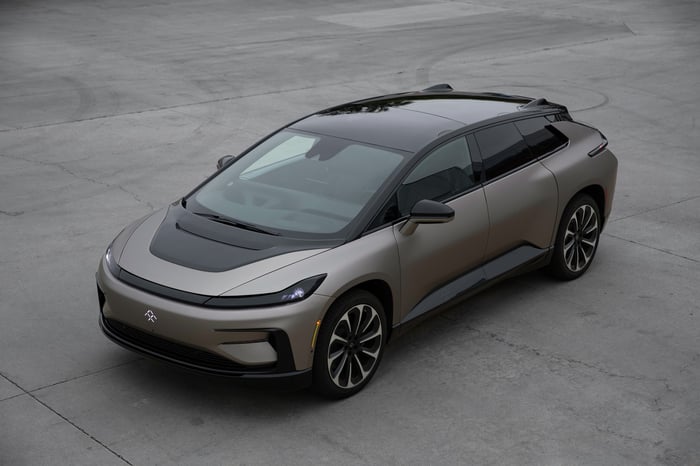 Last month, J Capital Research issued a report on Faraday Future titled Move Over Lordstown: There's a New EV Scam in Town that highlights many purported instances where the EV maker has failed to follow through on building several factories that were ultimately delayed or abandoned.

It points out that after eight years in business, it has failed to start making cars -- vehicles that are supposed to retail for $200,000 or more. And while it reportedly received deposits for 14,000 vehicles to date, over three quarters of those were received from a single buyer, supposedly a U.S. corporation. Due to delays in production, the $11.6 million deposit had been converted into a note payable. Faraday subsequently revealed the deposit may actually have been by an "affiliated company."

Faraday Future went public this summer via a merger with a special purpose acquisition company (SPAC), and it's been all downhill since.

Numerous lawsuits hoping to become a class action have been filed against the company claiming deceptions, and J Capital Research contends it's also being sued by unpaid suppliers, its assets have been frozen in China, and it is being run "behind the scenes" by "China's best-known securities fraudster."

Faraday says it hopes to file the quarterly report eventually, but has no timetable until the committee completes its investigation.

Stocks receiving delisting letters typically have an extended period of time to come into compliance before having their stock removed from an exchange. Even so, investors should probably stay far away from this stock until it can convincingly refute the allegations.