Visa delivered strong revenue and earnings growth in fiscal year 2021 in spite of COVID headwinds. And the company could fare even better in the next fiscal year.

It isn't exactly a well-kept secret that when a stock announces a massive dividend increase, investors tend to pay attention. After all, a dividend increase more often than not signals insiders are confident in the direction of their company.

Payment-processing stock Visa (V -0.68%) put investors on notice in late-October when it declared a 17.2% increase in its quarterly dividend from $0.32 to $0.375 per share. Let's take a look at a few reasons why Visa's board of directors were comfortable enough to authorize a huge dividend increase, as well as whether the stock is a buy at its current valuation. 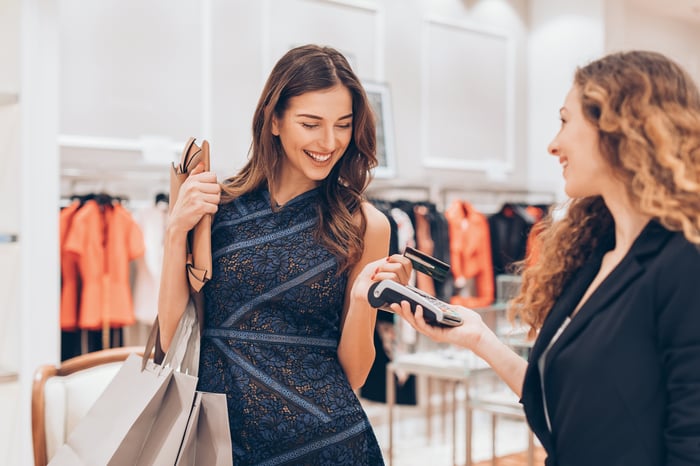 Visa demonstrated the resiliency of its business model

While COVID vaccines only widely became available in the third quarter of its FY '21, Visa recorded double-digit net revenue and non-GAAP earnings per share (EPS) growth compared to FY '20.

Positioned to benefit from a return to normalcy

And as hard as it may be to believe after a solid showing for Visa in the past year, the company appears as though it will grow at an even higher clip in its current fiscal year.

That's because the stock's operating results showed considerable momentum at the end of last fiscal year heading into this fiscal year. For instance, Visa's payments volumes, total cross-border volumes, and processed transactions were all higher in its fiscal fourth quarter than they were for the full-year. This suggests that with increasing COVID vaccination rates and more effective treatment options available to medical providers and patients, consumers are traveling and spending more, helping to accelerate Visa's growth potential even further.

That's why analysts are forecasting that Visa's non-GAAP EPS will soar 19.5% year over year to $7.06 in its current fiscal year.

A business with low bankruptcy risk

Visa performed well in its previous fiscal year and looks set up to do that once again in the current fiscal year. But is the company in a position to easily cover its interest expenses with earnings before interest and taxes (EBIT)? Let's dig into Visa's interest coverage ratio to answer this question.

An elevated interest coverage ratio such as Visa's suggests that the company faces minimal risk of being unable to service its debt, regardless of the operating environment that it may find itself in. Thus, investors considering purchasing the stock can be reasonably confident that their investment likely won't go bankrupt or "go to zero" in their lifetime.

Visa's trailing annual dividend yield of just under 0.7% is higher than its 13-year median yield slightly above 0.6%, which indicates that the stock could be an attractive buy for growth-oriented investors. And while shareholders wait for the market to award Visa with a higher valuation multiple, they can collect a safe and fast-growing 0.8% dividend yield.