Shares of Jabil (NYSE:JBL) and Marvell Technology (NASDAQ:MRVL) have delivered outstanding returns to investors in 2021 thanks to the robust growth in their top and bottom lines. 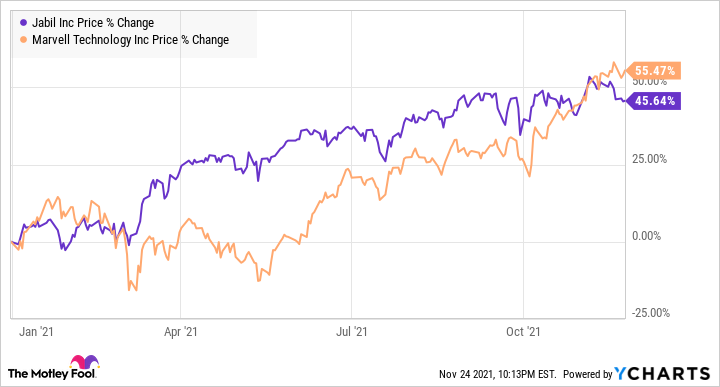 The impressive thing about these two stocks is that they are still worth buying despite their hot rally this year. That's because Jabil and Marvell could clock stronger gains thanks to a bunch of catalysts. What's more, their attractive valuations mean that investors who have missed the tremendous upside delivered by these two tech stocks won't have to pay through their noses to enjoy future gains.

Let's look at the reasons why you should consider buying Jabil and Marvell Technology.

Jabil is a contract electronics manufacturer serving several end markets such as mobility, industrial and semiconductor capital equipment, wireless and cloud, automotive, networking and storage, and healthcare, among others. The company delivered $7.4 billion in revenue in the fourth quarter of fiscal 2021 that ended on Aug. 31, 2021, along with adjusted earnings of $1.44 per share. Jabil recorded earnings of $0.98 per share in the year-ago period on $7.3 billion in revenue, indicating that its bottom line increased substantially thanks to fatter margins.

That's not surprising as Jabil remains laser-focused on expanding its core margins. The company delivered a core operating margin of 4.2% last quarter, which was 10 basis points ahead of expectations and an improvement of 70 basis points over the prior-year period. This indicates that Jabil's transition to a subscription-based model in the cloud business is paying off. 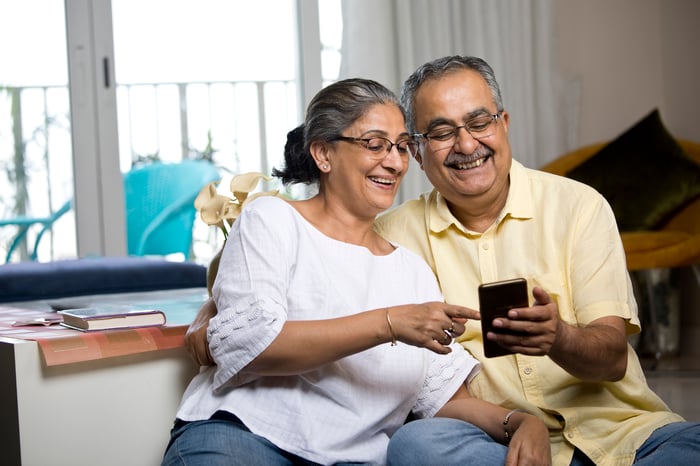 For the full year, Jabil had delivered $29.3 billion in revenue, an improvement of 7.4% over the previous year. Its adjusted earnings had jumped to $5.61 per share from $2.90 per share in fiscal 2020. More importantly, Jabil's momentum is expected to continue in fiscal 2022.

Analysts expect $6.36 per share in earnings from Jabil on revenue of $31.5 billion, which is in line with the company's guidance. So, Jabil's earnings are expected to increase by double-digit percentages once again this fiscal year, driven by an anticipated increase of 30 basis points in the company's core operating margin to 4.5%.

Jabil seems to be on track to hit those numbers as it anticipates $1.80 per share in earnings this quarter on $8.3 billion in revenue. However, don't be surprised to see Jabil boost its guidance as the year progresses as the demand for contract manufacturing remains robust in the markets it serves.

For instance, Jabil's revenue from the mobility business increased 27% in fiscal 2021 to $4.2 billion, while the connected devices business recorded a 12.5% increase in revenue to $4.5 billion. The impressive growth in these segments (which accounted for almost 30% of the total revenue) can be attributed to Jabil's relationship with Apple (NASDAQ:AAPL), which produced 22% of the former's top line last fiscal year.

Jabil makes casings for iPhones and iPads, and its Apple relationship is going to be a key growth driver in the coming years. Apple is making a killing in the 5G smartphone market, witnessing solid growth in both shipments and pricing. The smartphone giant has a huge installed base of around 800 million users that are waiting to upgrade to a 5G device, which means that it is likely to crank up iPhone production in the coming years.

So, Jabil's largest customer could continue to move the needle in a big way for the company and may even help it grow at a faster pace. Finally, as Jabil stock is trading at just 14 times trailing earnings and 10 times forward earnings as compared to the S&P 500's average earnings multiple of 28.7, it seems worth buying given the strong pace of its earnings growth and the potential for delivering more upside.

The booming demand for semiconductors used in data centers, 5G wireless networks, and the automotive industry has supercharged Marvell Technology's top and bottom lines. That's evident from the 48% year-over-year revenue growth Marvell recorded in the second quarter of fiscal 2022, which ended on July 31, 2021.

Now, Marvell stock trades at 22 times trailing earnings despite the company reporting such solid growth in its top and bottom lines. This makes buying the stock right now a no-brainer, especially considering that its end markets are set for secular growth. For instance, the data center market that recorded $434 million revenue in Q2 and grew 62% year over year has a lot of room for growth because of fast-growing applications such as data center switches.

Marvell sees its overall serviceable addressable market (SAM) jumping to $30 billion in 2024 from $20 billion this year. The company's data center opportunity is expected to increase at a compound annual growth rate (CAGR) of 24% during this period, while the automotive and industrial markets are expected to record 28% CAGR. The cloud, automotive, and 5G markets together are expected to clock 20% CAGR through 2024.

These sizable end-market opportunities have encouraged Marvell to raise its long-term guidance. The company expects revenue to clock a CAGR of 15% to 20% in the long run, up from its prior estimate of 10% to 15% growth. Marvell also anticipates improved profitability as it forecasts an operating margin of 38% to 40% in the long run, which is an improvement over the earlier estimate of 35%.

Given these tailwinds, it is not surprising to see why analysts expect Marvell's earnings to clock an annual growth rate of 38% for the next five years. As such, Marvell Technology is a top growth stock to buy right now given its attractive valuation, rapidly improving revenue and earnings and impressive long-term prospects.