Metaverse, metaverse, metaverse. The word seems to be all the rage these days, spurred on by Facebook's recent name change to Meta Platforms (NASDAQ:FB). The metaverse is an idea that, in the future, we will be able to access immersive shared virtual environments via the internet. Some of these worlds are already being built by video game and social media companies, but the growth of these platforms should continue for at least a decade if not longer, providing plenty of opportunities for investors with a long-term time horizon.

Dating will assuredly be a big part of the metaverse. Match Group (NASDAQ:MTCH), with its dominance in this category, can be a top metaverse stock for your portfolio. Here's why. 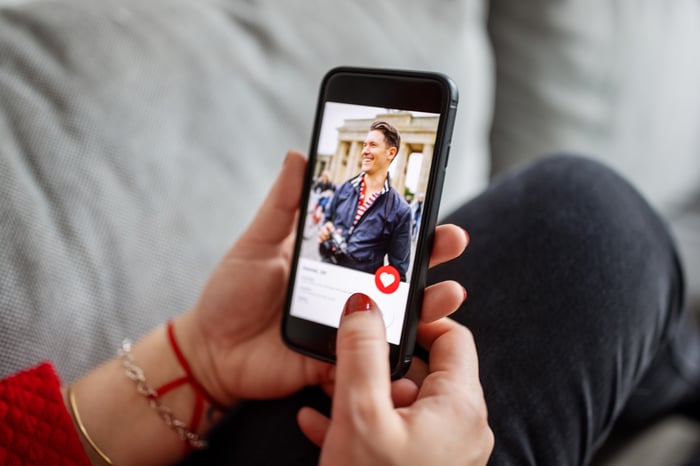 Durable growth with a long runway ahead

Match Group owns a portfolio of online dating properties. The most well-known are Match.com. Tinder, and Hinge, but the company owns many smaller apps as well, including Chispa, Pairs, and BLK that either serve particular demographics or geographical regions. Since going public in 2015, the company has put up impressive levels of revenue growth.

For example, in 2017, Match Group's revenue grew 19% year over year to $343 million. In Q3 of this year, it actually grew faster, up 25% year over year to $802 million. This shows how long of a runway the online dating category has with hundreds of millions of people around the globe turning to these apps to find potential mates.

The majority of Match Group's past growth has been driven by Tinder, which had 10.4 million paying users at the end of Q3, over 50% of Match Group's 16.3 million total paying users. Investors should expect Tinder to continue growing, but the company has an even faster-growing app in its portfolio: Hinge. Hinge is a relationship-focused app that targets a bit of an older audience than Tinder and is getting fantastic adoption right now. Management doesn't break out its direct revenue yet, but revenue grew north of 100% year over year last quarter. And this is before the app makes a push internationally, which is set to roll out next year.

In fact, right now Hinge is grossing more on Alphabet's Google Play store than Bumble, the second-largest dating application in the world behind Tinder. If Hinge can get to the same level of revenue as Tinder is now within the next five years, Match Group's overall revenue should continue its quick upward march as well.

If it continues to get adoptions with its dating/matchmaking applications, Match Group's financials will keep growing. But that's not all the company is up to. In its Q3 letter to shareholders, management outlined its strategy to expand the usefulness of Tinder and its other properties.

First, the company is launching virtual coins at Tinder, which will help make the app more economy-based as users get used to paying for virtual goods and boosts to their profiles. The company is also expanding the use cases of being on Tinder, making it more community-based where users can find people who share the same interests as them instead of just swiping endlessly. On top of this, Match Group plans to add more video, artificial intelligence (AI), and augmented reality (AR) experiences to its apps, which will hopefully expand the revenue opportunities for the company.

This all cumulates in Match Group's new project in South Korea that was launched by a company it recently acquired called Hyperconnect. The project is called Single Town, an avatar-based virtual world (i.e., a metaverse-type experience) where single people can meet others in a more immersive way. It is still very early days for this project, and it is unclear whether it will get wide adoption, but Match Group is embracing the virtual world more and more, which could provide another avenue for growth over the next few years and beyond.

Even though Match Group is growing so quickly and investing in so many new projects, the company is highly profitable. Over the last 12 months, Match Group generated $936 million in operating cash flow. Compared to its market cap of $38.6 billion, the stock has a price-to-operating cash flow (P/OCF) of 41. This is expensive vs. the market's average earnings multiple. However, if you believe in the continued proliferation of online dating and Match Group's investment into the metaverse, then the company could be generating much more in annual cash flow three to five years from now. This makes Match Group a top metaverse investment for investors right now.