I must admit that I've been blown away by what Shiba Inu (CRYPTO:SHIB) has done in a short time. A one-year gain in the ballpark of 54,000,000% tends to impress me. Shiba Inu came out of nowhere to become one of the most talked-about and most popular cryptocurrencies in the world.

But I don't think that Shiba Inu is the best cryptocurrency to buy now. The digital token that's at the top of my list is even more popular (at least, based on market cap). And I think it could be a huge winner over the next few years. Here are four reasons why Solana (CRYPTO:SOL) is the one cryptocurrency I'd buy right now. 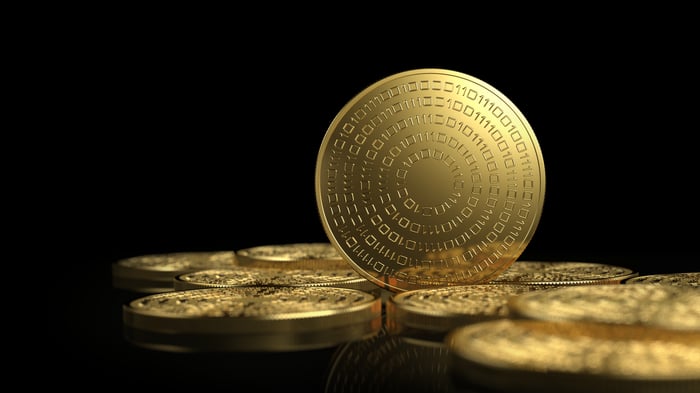 Real-world utility is an important consideration in my view when considering cryptocurrencies. That's a top reason why I like Solana.

There are currently around 500 projects built on Solana. They include decentralized finance (DeFi) applications, games, non-fungible tokens (NFTs), and Web3 apps. One project that I find especially intriguing is Star Atlas. It's a massive multiplayer metaverse. Star Atlas CEO Michael Wagner said, "The overall vision for Star Atlas is not possible on any other blockchain."

Granted, Ethereum (CRYPTO:ETH) has even more projects built on it. But Solana is the fastest-growing crypto ecosystem on the planet. I wouldn't say it's an "Ethereum killer" because I don't think that Ethereum is going away. However, my take is that Solana will continue to gain ground and remain the top competitor to Ethereum.

2. The fastest blockchain in the world

The most important reason why Solana is attracting so many developers is its transaction speed. It's the fastest blockchain in the world, by far.

Ethereum's Eth2 upgrade could change the dynamics. It could scale up to 100,000 transactions per second. However, the full upgrade won't happen until sometime next year.

Does this change my optimism about Solana? Nope. It could become even faster, too. Solana co-founder Anatoly Yakovenko has stated publicly that the Solana blockchain is "about four times slower than it should be."

Another great advantage for Solana is its low costs. Transaction costs are less than $0.01. Even better, the blockchain's scalability will allow those costs to remain low.

This competitive edge shouldn't be understated. Ethereum transaction fees have skyrocketed. As a result, some are leaving the popular blockchain.

Hedge fund CEO Su Zhu is one of the most prominent cryptocurrency investors in the world. The billionaire recently tweeted that he has "abandoned" Ethereum after previously being a key supporter.  He blamed the high gas fees. Zhu also tweeted that "the millions of new users coming" shouldn't "be ashamed for going to other ecosystems," nor should "developers be shamed for building on them."

Solana is and will likely continue to be a key beneficiary as users and developers switch from high-cost blockchains to lower-cost alternatives.

Sure, Solana is near its all-time highs after soaring more than 9,300% over the last 12 months. However, I think the cryptocurrency still has a lot more room to run.

Solana's market cap currently stands at close to $65 billion. That ranks Solana as the fifth-biggest cryptocurrency on the market. But its market cap is still less than one-sixteenth the size of Bitcoin's (CRYPTO:BTC) and a little under one-eighth the size of Ethereum's.

I don't expect Solana to deliver as staggering of a return over the next few years as Shiba Inu has over the last 12 months. But I don't look for Shiba Inu to provide a repeat performance, either.

What I do expect is that Solana's blazingly fast processing speeds and super-low costs will continue to attract developers. And I think that it will remain the fastest-growing crypto ecosystem. This should result in Solana generating impressive returns over the long term.