When investing, it's not often you find great businesses that you feel confident holding onto for years or even decades. The important attributes I look for include a long growth runway, a strong franchise, and resilience during downturns. The ability to pay out consistent, growing dividends is yet another good reason to hold on to a company as these payouts represent a tangible return on your investment.

These characteristics enable a business to continue compounding over the long term and help you to generate an enormous amount of wealth for your eventual retirement. Growth stocks help to boost the value of your investment portfolio while dividend stocks generate a rising stream of passive income that can cover your expenses once you throw in the towel.

When I find stocks with these desirable traits, my instinct is to hold onto them and never let go. Here are two stocks, one growth- and one dividend-oriented, that I will never consider selling. 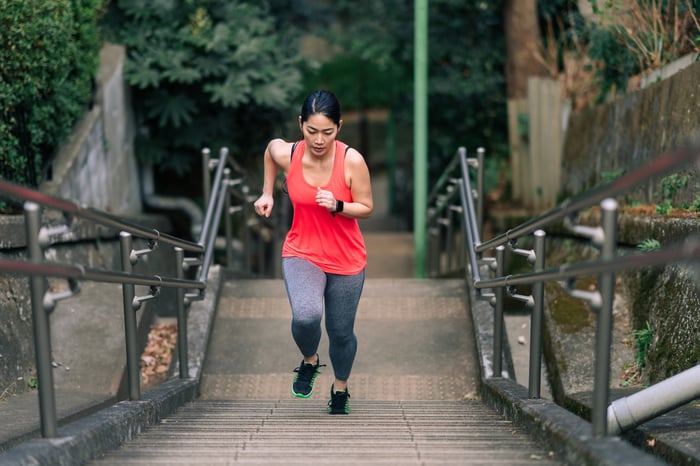 Not many companies can claim to be a consistent market leader in sports footwear and apparel, but Nike (NYSE:NKE) certainly holds that honor. The company has demonstrated its resilience during the pandemic as revenue for its fiscal year 2020 (ended May 31, 2020) dipped just 4% year over year to $37.4 billion. By the same period in 2021, revenue had rebounded and surpassed 2019's level at $44.5 billion. Gross margin also held steady at the 43% to 44% level despite widespread store closures across the world, attesting to Nike's brand strength. Although net income slid 37% year over year in 2020, it would go on to surge 42% higher than 2019's level at $5.7 billion thanks to a rebound in demand and a surge in digital sales.

The company has carried that momentum into fiscal year 2022's first quarter with revenue rising 16% and net income jumping 23% over the year-ago period. The quarterly dividend clocked in at $0.28 per share, up from $0.25 in the same quarter last year. The good news is that management has recently approved an 11% year-over-year increase in the quarterly dividend to $0.31 for Nike's current fiscal year.

Of note is the company's digital sales, which increased by 29% year over year as the company works on deepening its connection with its customers. In Nike's most recent earnings call, CEO John Donahoe highlighted that digital is expected to continue to power the company's growth in 2022 and beyond.

By onboarding members to its platform, Nike then uses data and analytics to personalize its product offerings, thus encouraging repeat purchases. The company is also adeptly merging digital and physical to offer a "phygital" experience that should drive consumer engagement and improve loyalty.

And let's not forget about the company's reputation for innovative footwear that ties in with musicians, well-known gamers, and sports stars. Nike's collaboration with Riot Games has seen the release of its latest sneakers, Dunk Lows, which tie in with the League of Legends video game. South Korean rapper G-Dragon has also unveiled his latest tie-up with Nike on a pair of sneakers -- set to debut in December -- called Nike Kwondo1. These moves will surely endear a new legion of fans to Nike's products and continue the sports giant's sales and profit momentum into the future.

Shifting from growth to dividends, American Tower (NYSE:AMT) is a real estate investment trust (REIT) that boasts a reputation for paying out consistently rising distributions. As an owner of around 219,000 communication sites as of Sept. 30, the REIT obtains the bulk of its revenue from stable and predictable leases to wireless service providers and telecommunication companies.

American Tower's distributions to shareholders have been growing at around 20% per annum since 2012, underpinned by these long-term tenant leases that are contractually tied to inflation. Top U.S. tenants include such big names as AT&T and Verizon Communications. The REIT also enjoys high lease-renewal rates as alternative sites may not be available, thus giving the business resilience during the pandemic.

Movement restrictions and border closures have also led to a massive surge in online adoption, thus fueling the need for telecom companies to double down on more communication sites to satisfy this demand. That, coupled with the proliferation of 5G networks, should help American Tower enjoy long-lasting demand for its communication sites, thus ensuring rental income remains steady for many years to come.

While growth of the REIT's distributions has moderated to 15%, recent corporate moves may help it to reaccelerate. Back in January, it announced a $9.4 billion acquisition of Telxius Towers from Telefónica comprising 31,000 communication sites spread out over Europe and Latin America. American Tower also committed to spending $500 million to construct around 3,300 additional sites in Germany and Brazil to be completed by 2025.

And just this month, it acquired CoreSite Realty in a $10 billion deal that will elevate American Tower's status as an owner of not just communication sites but also data centers. The CoreSite acquisition will bring the business to another level, tapping a growing asset class in data centers while nurturing the steady growth of its communications tower portfolio.

All in all, these two deals should cement the REIT's status as a dividend play and enable it to scale up its portfolio by creating multiple revenue streams.