Sometimes, the largest and the stablest businesses are excellent options to anchor your portfolio with some steady cash flow. In particular, GlaxoSmithKline (NYSE:GSK) and Bristol-Myers Squibb (NYSE:BMY) are two of the world's most preeminent pharmaceutical companies, but neither has consistently outperformed the market over the past five years.

Still, both companies pay a decent dividend, and they aren't going to go out of business anytime soon due to their massive portfolios of approved medicines and candidates in development. Let's examine each company to see if one of them offers better long-term prospects for your portfolio than the other. 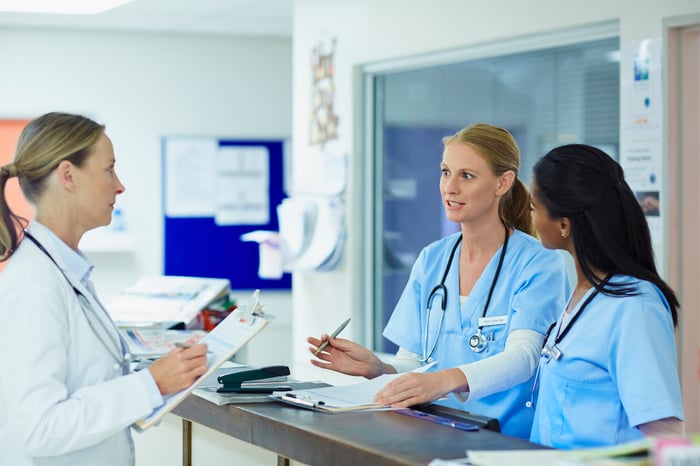 Right now, Bristol-Myers is in the doldrums. The company fell into being narrowly unprofitable in late 2019, and its margin has yet to recover. Plus, it faces a reduction in revenue as a result of upcoming patent expirations for some of its big earners, including the chemotherapy drug Revlimid.

But there are still a few points in favor of buying the stock. Over the past three years, its quarterly revenue has jumped 94.6% and quarterly net income has risen 33.3%. Through 2025, management expects revenue to grow in the "low- to mid-single digit" range each year. While that's not anything to get excited about, the stock could get a few boosts along the way if high-profile cancer medicines like Opdivo and Breyanzi are approved for new indications in 2022 and beyond.

In the meantime, investors can reap the rewards of a good dividend, currently yielding about 3.5%. Since 2016, that payout has grown at a compound annual rate of nearly 8%. Plus, given the company's steadily rising free cash flow -- up nearly 140% since the beginning of 2019 -- it's reasonable for investors to expect more dividend hikes ahead.

In comparison to Bristol-Myers, GlaxoSmithKline is growing more slowly. Quarterly revenue has increased 18.7% since the end of 2018 and earnings are only up 3%. But its profit margin is still positive.

In terms of its upcoming catalysts, cabotegravir -- its potential drug for HIV prevention -- is currently in registration and will likely be approved and start to bear revenue as early as the first half of 2022. Assuming it gets the green light, it will join GlaxoSmithKline's other HIV drugs, which as a group delivered 8% year-over-year revenue growth in the third quarter.

Aside from progress with its pipeline, the real wild card for investors is GSK's plan to spin off its consumer healthcare division over the next year. Management is predicting the pharmaceutical-oriented entity will post annual sales growth of more than 5% through 2026 after the separation is finalized.

Finally, in regard to its dividend, GSK has a slight edge compared to Bristol-Myers, sporting a yield of about 5%. But its dividend doesn't have any history of consistent growth over time, and we don't know for certain how it will be affected by the spinoff. 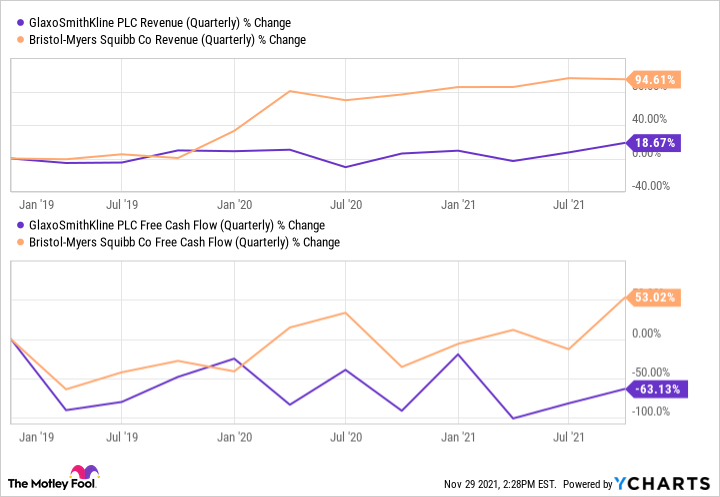 They're both decent options

Neither of these companies is about to start crushing the market anytime soon, and their projected performance is very similar over the next few years.

Still, I'm of the opinion that Bristol-Myers is probably the better buy as its revenue, earnings, dividend, and free cash flow have all been increasing at a faster pace than GlaxoSmithKline's. All of that could easily change in the years after GSK's spinoff is concluded, however, so investors should be sure to stay tuned.