Investors hoping for an announcement about strong Thanksgiving weekend movie attendance were sorely disappointed on Monday. AMC Entertainment Holdings (NYSE:AMC) was quick to tout the industry's best weekend since the pandemic took hold following the mid-October dual debut of No Time to Die and Venom: Let There Be Carnage, but no such news surfaced after what was a four-day weekend for many.

That's because ticket sales essentially stunk during what's usually a boon for the business. 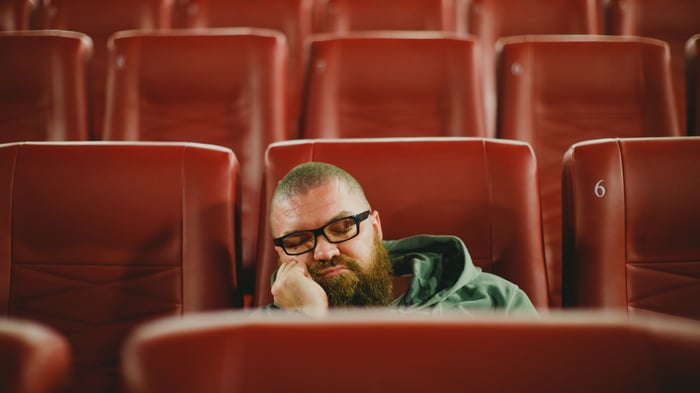 The environment must be considered, to be fair. Although the COVID-19 pandemic is slowly abating in large parts of the country, would-be moviegoers still appear to be leery. Mask mandates are still in effect in some locales, and while the omicron strain of the coronavirus hasn't yet been found in the United States, many people continue to exercise an abundance of caution. It's also worth noting there weren't any must-see films premiering this past week. The weekend's big winner was a Walt Disney (NYSE:DIS) flick called Encanto, but it opened without the usual sort of buzz Disney is capable of creating.

Still, for all the innuendo that movie theaters are almost back to their pre-pandemic traffic, the second-worst Thanksgiving weekend since 1997 says the film business is still deep in a hole.

Between Wednesday and Sunday, Box Office Mojo reports movie theaters sold $141.6 million worth of tickets. In and of itself it's not disastrous. In fact, it's above average, and miles ahead of the year-ago comparison of only $20.3 million when The Croods: A New Age was theaters' top draw. It's only a fraction of 2019's pre-COVID comparable of $262.3 million though, and 2019 was no fluke. The previous year's take over the course of the five days encompassing Thanksgiving was a healthy $314.9 million, on the back of Ralph Breaks the Internet. Box office sales remain about half of what they were before the coronavirus rattled the world beginning in early 2020. 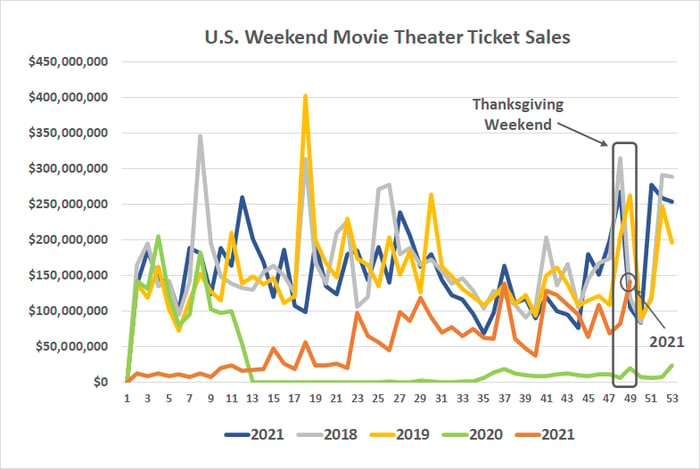 We may be inching our way back to normal, but we're still nowhere near that normal just yet.

Studios aren't exactly helping. Walt Disney was willing to risk debuting Shang-Chi and the Legend of the Ten Rings exclusively in theaters over Labor Day weekend, a gambit that paid off even if it plugged into sheer pandemic fatigue. Disney also scored well at the box office with Black Widow, even if it simultaneously premiered via streaming platform Disney+. Ghostbusters Afterlife fared well enough with its debut a week earlier, and Dune generated respectable numbers in the latter half of October. None of those titles were a proverbial "hot ticket" though, with the ability to command a mob to step foot in a movie house. None had the real staying power theaters need either, with no film since Shang-Chi leading box office sales for more than a couple of weeks. Meanwhile, lauded titles like Top Gun: Maverick, The Batman, and Avatar 2 have seen their theatrical releases postponed -- again -- due to coronavirus concerns. There's no particular reason they can't get put off yet again.

In other words, studios aren't yet handing all of their best stuff over to theaters, and it's noticeable to moviegoers.

Then again, who can blame the studios? While seemingly a box office success in terms of worldwide ticket sales of $756 million, No Time to Die has been rumored to be on pace to lose money once its theatrical run finally comes to a close. In the meantime, several less-splashy but still-expensive titles like The Last Duel starring Matt Damon have most assuredly lost money by premiering into a tough environment.

The matter is tantamount to the chicken-or-egg argument. If theaters can't draw a crowd, then studios don't want to waste a film on them. If studios don't offer their best material, theaters can't draw a crowd. COVID-19 remains an unpredictable factor that could readily wreck whatever cooperation the parties on the two sides of the table can muster. It will take time to ease into such relationships given the backdrop.

Time, however, is a luxury that theater operators like AMC, as well as Cinemark Holdings (NYSE:CNK) and Regal parent Cineworld (OTC:CNNW.F), just don't have. All three continue to bleed money, and with what should have been a great weekend not even matching box office tallies from over 20 years ago, that doesn't look like it's going to change soon enough. Shareholders would be wise to keep these stocks on a short leash.