It looked like Advanced Micro Devices (NASDAQ:AMD) could eat into Nvidia's (NASDAQ:NVDA) dominant graphics processing unit (GPU) market share thanks to the aggressive pricing and better availability of its graphics cards, but the latest report from Jon Peddie Research indicates otherwise.

Nvidia exerted its authority in the discrete GPU market once again in the third quarter of 2021, leaving AMD far behind in second place. Let's look at the state of the graphics card market in the previous quarter and see why Nvidia's tight grip over it is great news for the stock. 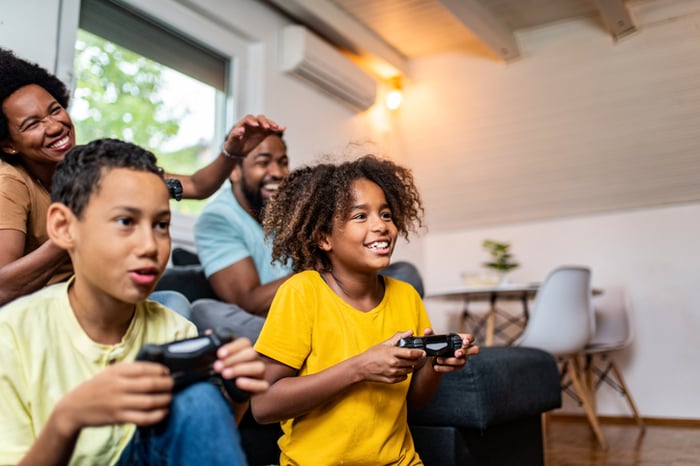 Jon Peddie Research points out that Nvidia controlled 83% of the discrete graphics card market in the third quarter, with AMD holding the rest. That's an improvement for Nvidia over the prior-year period when it held an 80% market share.

Nvidia's GPU shipments increased 8% sequentially in the third quarter while AMD's shipments were down 11.4%. It is also worth noting that overall GPU shipments, including integrated graphics cards, fell 18.2% quarter over quarter. The research firm pointed out that GPU sales were constrained by supply chain challenges last quarter, but it is impressive to see that Nvidia bucked the trend and increased sales.

These smart steps are delivering the goods for the chipmaker

Nvidia has been taking steps to increase the supply of its graphics cards to meet the robust end-market demand. Chief Financial Officer Colette Kress pointed out on Nvidia's November earnings conference call that "nearly all of our Ampere architecture gaming desktop GPU shipments were lite hash rate to help steer GeForce supply to gamers."

But this is just one side of the coin as Nvidia has taken steps to increase the supply of its cards as well. Responding to an analyst on the conference call, CEO Jensen Huang pointed out that the company has bolstered its supply chain:

"First of all, we have secured guaranteed supply, very large amounts of it, quite a spectacular amount of it from the world's leading foundry in substrate and packaging and testing certain companies, the integral part of our supply chain. And so we have done that and feel very good about our supply situation, particularly starting in the second half of this year and going forward."

As such, Nvidia could continue to dominate the graphics card market thanks to its efforts to enhance supply. More importantly, the company's GPU dominance is going to be a massive tailwind for its top and bottom lines in the long run. The Jon Peddie report estimates that the discrete GPU market could generate $44 billion in revenue by 2023 as compared to $29 billion last year. This huge increase doesn't seem surprising as GPU prices have shot up thanks to the short supply, and the supply chain constraints are likely to continue throughout 2022.

So Nvidia could benefit from a mix of higher graphics card volumes and improved pricing, which could substantially increase revenue from the gaming segment. Nvidia's gaming business produced 45% of its total revenue last quarter. The segment's revenue jumped 42% year over year to $3.22 billion as the company said it benefited from strong demand for its Ampere architecture products leading into the holiday season.

This trend is likely to continue as Nvidia is in a solid position to take advantage of the fast-growing graphics card market, which could help it remain a top growth stock in the long run even after this year's eye-popping gains of over 140%.