Volatility remained in the cards for Wall Street investors on Wednesday, as market participants struggled to find direction amid constantly changing narratives. Comments from medical professionals about the omicron COVID-19 variant, as well as testimony by Treasury Secretary Janet Yellen and Fed Chair Jerome Powell painted different pictures of what the future could bring.

In the end, the Dow Jones Industrial Average (DJINDICES:^DJI), S&P 500 (SNPINDEX:^GSPC), and Nasdaq Composite (NASDAQINDEX:^IXIC) gave up early gains and finished between 1% and 2% lower.

We continued to see a parade of earnings reports from the tech sector, as a pair of SaaS stocks gave their latest results. Investors have had high hopes for both Snowflake (NYSE:SNOW) and Elastic (NYSE:ESTC), but only one made their shareholders happy after the close of the regular trading session on Wednesday. Below, we'll look at both and see which one made the grade.

Let it snow in the cloud with Snowflake

Snowflake turned out to be the winner of this earnings duel, with the stock climbing 13% in after-hours trading late Wednesday afternoon. The data cloud specialist continued to report amazing growth, with no end in sight to the high demand for its product line. 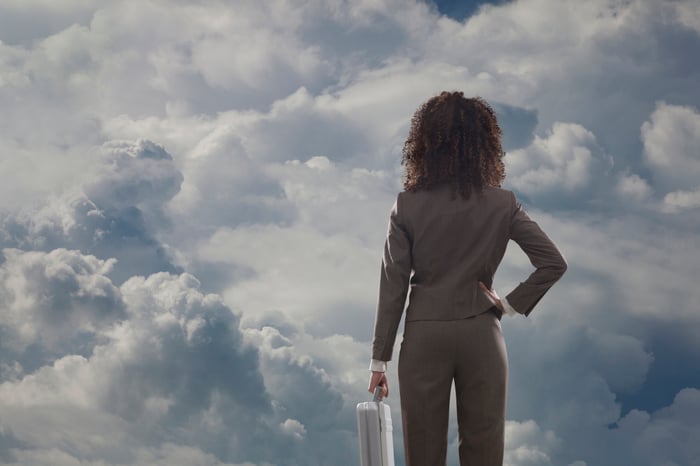 Snowflake is also getting more traction from the customers it currently has. The company's net revenue retention rate was a whopping 173%, showing an incredibly fast adoption rate among existing customers to expand their use of the Snowflake platform.

Moreover, Snowflake sees its success continuing into the fourth quarter, projecting product revenue of $345 million to $350 million. That would mean another near-doubling from last-year's period, and that's the kind of growth investors want to see going forward.

Elastic gets stretched out

Elastic wasn't as lucky, with its stock falling 8% in after-hours trading. That added to significant losses during the regular session, as investors didn't seem to like what they saw in the company's fiscal second-quarter financial report.

Elastic's numbers still showed considerable growth. Revenue rose 42% year over year to $206 million, with sales from its Elastic Cloud product jumping 84% to $69 million. Billings were up 30% to $231 million, and adjusted losses of $0.09 per share were narrower than many of those following the stock had expected to see. Customer counts rose by more than 4,000 to over 17,000, and Elastic boasted 830 customers bringing in at least $100,000 per year in annual contract value, up from 650 a year ago.

However, investors didn't seem to like expectations that revenue in the fiscal third quarter would likely be little changed from current levels. Although full-year revenue guidance of $826 million to $832 million in sales, and losses of $0.51 to $0.61 per share was better than the consensus forecast among investors, shareholders nevertheless seemed to want more.

Growth investors have gotten used to extremely high rates of increase in key performance metrics. Snowflake showed that those expectations can be met, but when they're not, Elastic's experience shows the likely result.