The tech sell-off is intensifying, particularly in smaller-growth companies. The S&P 500 and Nasdaq are still up over 18% for the year, but many well-known blue-chip businesses have seen their stock prices start to nosedive.

A lesson we learned from the March 2020 sell-off and past plunges is that when good companies go on sale for what appear to be short- to mid-term reasons, it's usually a good time to buy. Share prices of Walt Disney (NYSE:DIS) just crashed to a fresh 52-week low and are down nearly 35% from their all-time high. For what many consider to be a leader in the entertainment industry, not to mention an international icon, it appears like too good of a deal to pass up. However, simply ignoring a company's challenges and buying the dip in the hopes that the stock recovers can be a dangerous game.

After pushing Disney's risks out in the open and weighing them against its pros, it's clear that Disney is undoubtedly my top stock to buy for 2022. Here's why. 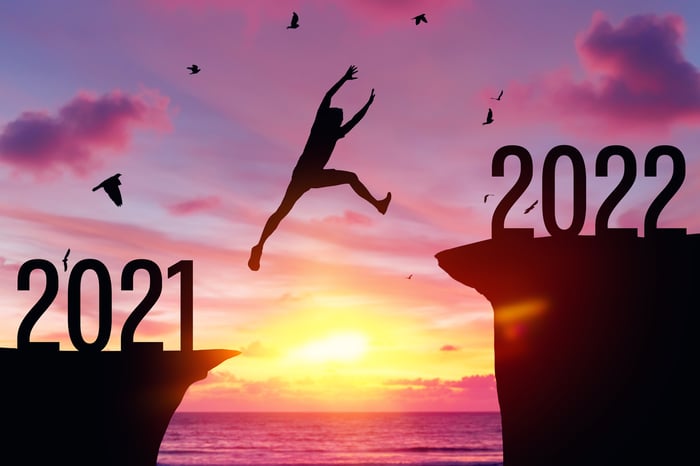 Fears that the Omicron COVID-19 variant could impact attendance at movie theaters and Disney parks are a real threat. One of the main reasons why Disney was a surprising value stock that reached an all-time high in 2020 is because investors largely ignored its impaired park and studio entertainment revenue -- focusing instead on the hot start of Disney+. However, parks and movies made up 70% of Disney's 2019 sales -- making it hard to completely ignore a prolonged slowdown.

Thankfully, Disney's park revenue did show signs of a rebound in the recently reported Fiscal Year (FY) 2021 fourth quarter. Even with an improved situation, the harsh reality is that Disney could be in for yet another year of park and movie revenue that's still less than its 2019 performance. Three years of negative growth is something a lot of investors simply don't want to be a part of. In this vein, it's unsurprising Disney has fallen from its high -- a high that was set during a time when Disney+ growth numbers were booming and widespread vaccinations sparked thoughts of a full economic recovery.

Ultimately, Disney stock is down because it isn't rebounding its bread-and-butter businesses as quickly as investors hoped and because Disney+ subscriber growth is slowing. To finish FY 2021, Wall Street was hoping for 125 million subscribers, but the data came in at 118.1 million subscribers.

Disney's transition from a low-growth, dividend-paying stock with a ton of profit to a low profit, higher-growth company that doesn't pay a dividend (and won't anytime soon) is a tough pill to swallow. It wasn't long ago that Disney stock had a 1.5% dividend yield and between a 15 to 20 price to earnings (P/E) ratio. Today, Disney has a P/E ratio of over 100.

The glass half full perspective

As bad as the short-term headwinds look, it's easy to imagine that Disney could be in its best shape ever in just a couple of years. Demand for its box office hits is showing no signs of slowing down. Revenue from media networks, parks, and films was at all-time highs right before the pandemic hit.

Focusing too much on slowing Disney+ subscriber growth misses the bigger picture. Disney+ was launched in November 2019. And in just two years, Disney has a staggering 118 million subscribers -- which is over half of Netflix's 209 million subscribers. Yet Netflix stock has a market cap of $273 billion compared to Disney's $258 billion market cap.

A big question mark entering 2021 was Disney's ability to retain Disney+ subscribers that hopped on during the pandemic lockdown. The company has proven its ability to grow its streaming service subscribers even as folks are seeking entertainment outlets away from home. Looking a few years out, it wouldn't be surprising if Disney was setting fresh box office records, park attendance was booming, and the number of Disney+ subscribers steadily gained. If that is the case, then Disney stock would arguably deserve to be a lot higher than it is today.

The power of a brand

Volatility for unproven growth stocks, risky high-yield dividend stocks, or value stocks with weak prospects is one thing. But if a company like Disney has a few weak quarters or even a few rough years, is it really worth drastically less? Maybe to some, but the value of companies like Disney is so much more than just their assets and earnings.

Well-known brands have staying power through good times and bad. When you think of shoe companies, you probably think of Nike. Coffee conjures Starbucks. Fast food flips Mcdonald's into the foreground. When you think about theme parks, movies, merchandise, and now streaming, there's a good chance you think of Disney. That isn't a connection that's going to go away anytime soon. Disney is arguably one of the most powerful brands in the world, and it has plenty of room to grow from here.

The sell-off in Disney stock makes perfect sense if you're valuing the company based on how it's doing right now. But it seems incredibly overblown if we think about where Disney is likely to be a few years down the road and even decades into the future. For investors looking for a quality business that's on sale, Disney stands out as the single best choice right now.