Amid the supply chain crunch, individual major retail companies are taking previously unheard-of measures to bring products to the U.S. from overseas factories. According to reports from Reuters and other news sources, several big retailers, including Walmart (NYSE:WMT), The Home Depot (NYSE:HD), Target (NYSE:TGT), and privately held Ikea, are now chartering cargo ships to create their own supply chain.

Is this strategy worth looking at as part of assessing a company's investment worthiness? Here's a brief overview of why it could be bullish, though not necessarily a long-term solution. 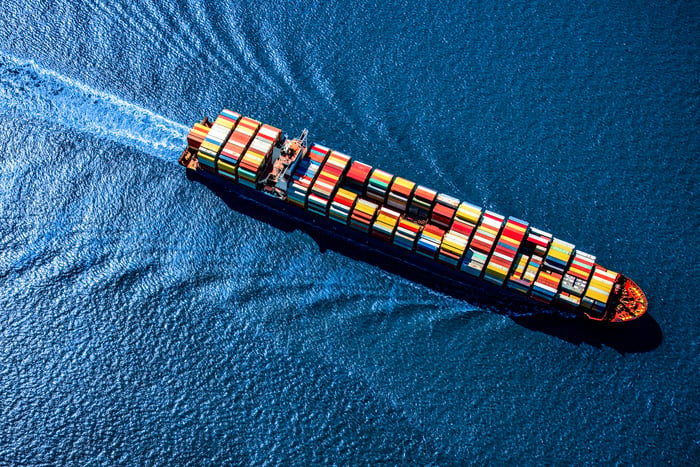 The possibilities, and possible problems, of chartered cargo ships

"It tells you something when a few guys in the audience think they can whistle a better tune than the full orchestra." That was the vivid phrase used recently by James Hookham, director of the Global Shippers Forum at a High-Level Maritime Dialogue event to describe retailers' foray into container ship chartering. Hookham was implying that this situation is completely outside the usual norms of shipping, with the retailers attempting to bypass long-established shipping industry channels to set up their own private "product lifeline" to the faraway countries where many American consumer goods are made.

The event also discussed the possibility of large retailers, perhaps eventually including Amazon, making these charter shipping arrangements permanent. Despite the intense need for goods, it remains unclear if chartered shipping of this kind will become "part of ... routine operations," according to Hookham.

For at least this holiday season, the chartering could be a major boost. Walmart, one of the companies known to be using the method, expects a 5% jump in holiday sales to deliver another $30 billion in revenue this year. This surge is supported by a 12% surge in inventory by late October, a "stockpiling" of items ahead of the Christmas rush likely impossible in 2021's struggling logistics sphere without cargo ship charters. The company's expected red-hot sales wouldn't be possible without inventory for shoppers to buy, so the strategy appears to be paying off for one of the biggest names in retail.

On the potential downside, chartering cargo ships could be more expensive than simply relying on standard shipping channels. In an adjacent sector, dry bulk shipping, fleet utilization is at 98%, and new shipbuilding at a longtime low, with the fleet expected to have net growth of only 1.9% next year and 1.6% in 2023. Under such circumstances, chartering cargo ships will naturally be more expensive than just relying on the existing network.

However, detailed metrics provided by American Eagle Outfitters (NYSE:AEO) suggest the benefits of chartering more transport (air rather than sea, in this case) outweigh its costs, at least for now, and at least for big players. American Eagle's Q3 net revenue surged 24% year over year to $1.27 billion, well ahead of analyst expectations. It expects "additional freight costs in the range of $70 million to $80 million, which will impact the fourth quarter" as a result of its chartering strategy, according to CFO Mike Mathias, who said it during the company's Nov. 23 Q3 earnings conference call.

But Mathias then went on to say American Eagle "met our goal to ensure our customers do not feel any impact from the supply chain disruptions and we're well-positioned to meet holiday demand." The year's operating income is pegged to surpass $600 million, beating its 2023 $550 million target two years early. While the company's long-term financial guidance won't be made available until its fourth-quarter and full-year report, the plan of spending more for reliable freight deliveries appears to be paying off handsomely despite its relatively higher expense.

Mastercard's SpendingPulse research backs up strong holiday sales with a prediction of a 7.4% jump in retail purchases for the 2021 Christmas season. Statista Research forecasts full-year 2022 retail sales to be up 6.6% year over year, stacking on top of 2021's estimated gains of 7.2%, showing retail growth is likely to continue. The charter shipping strategy should help those retail companies that are adopting it maximize their revenue during this time of opportunity.

What about retailers without cargo ship charters?

Another way of assessing the chartering strategy is making a comparison with the performance of retail store companies that don't use it. Clothing seller Lands' End (NASDAQ:LE) provides a potentially useful up-to-date snapshot of such an enterprise, with its third-quarter earnings report issued on Dec. 2. This small-cap stock saw its share price plunge approximately 10% the same day it reported, following a significant revenue miss.

While Lands' End's Q3 revenue rose 4.4% year over year to $375.8 million, which is also a 10.5% jump on a two-year stack basis compared to pre-pandemic Q3 2019, it still missed Wall Street consensus expectations, delivering a 5% negative surprise. Adjusted earnings per share (EPS) were flat year over year, though they were $0.01 short of analyst predictions.

The stock market drop was probably mostly driven by Lands' End's guidance. Coming in below consensus expectations of $1.69 billion, it is guiding for full-year revenue of $1.64 billion to $1.655 billion. It also predicts $1.04 to $1.13 in adjusted EPS for the full fiscal year. During the Q3 conference call, CFO James Gooch reported inventories are lower than last year, stating the "decrease in inventory was a result of the shipping delays from the numerous supply chain challenges." Expenses are also expected to be $15 million higher in fiscal Q4 because of supply chain pressures.

Lands' End, a retailer relying on the "full orchestra" of ordinary shipping rather than an individual chartered supply chain, is still managing to grow its revenue and maintain its EPS in the face of the shipping bottleneck. However, it is failing to meet some of Wall Street's expectations, and its slumping inventory could potentially have negative effects on its growth in the coming quarters.

Is cargo ship chartering a positive signal for retailers?

The question, then, is whether the retailers who choose to try to "whistle a better tune" than the general shipping market by chartering their own supply ships are a better investment than those not adopting this strategy. The answer appears to be that ship chartering is a positive, but it shouldn't be the single deciding factor in an investment decision.

Chartering ships or extra air freight is probably a bullish strategy at this point because having inventory on shelves outweighs the additional cost of hiring dedicated transoceanic transport. Similarly, not chartering ships exposes a company to a risk of stacking inventory shortages, depending on how long the bottleneck continues. There are many other factors you should consider when choosing to open or expand a stake in specific retail stocks. But chartering cargo ships to keep shelves stocked is likely a plus and should arguably be counted as a short-term bullish indicator when you make your picks, even though in the long term, easing of supply chain problems will make the strategy moot.