Macy's (NYSE:M) has been one of the market's favorite stocks in 2021. Shares of the retailer are up 138% for the year so far. The company is rebounding strongly from the devastation caused by the coronavirus pandemic.

Moreover, changes management made at the pandemic's onset to reduce expenses are paying off as profits are soaring. Still, the company is a mainly brick-and-mortar retailer that has struggled to grow sales in the last decade. That has some investors wondering if Macy's stock has overextended itself. 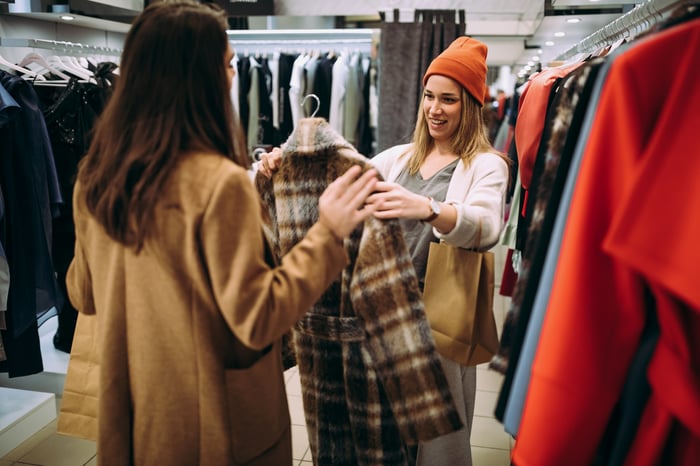 Customers are showing a preference for Macy's omnichannel experience

In its fiscal third quarter ended Oct. 30, Macy's reported net sales of $5.44 billion. That's up from the $5.17 billion in sales it reported in the same quarter in 2019. That's impressive considering that the pandemic is still raging, and Macy's has fewer stores open now than it did in 2019. Furthermore, it gets good sales from tourists and downtown stores, which are still below levels from before the outbreak.

At the heart of Macy's sales rebound is a robust digital channel. Online sales increased by 19% from the same quarter last year and 49% from the same quarter in 2019. Before the pandemic, Macy's proceeded cautiously, building out its online business. Management feared that sales from the online channel would keep people from walking into the brick-and-mortar stores, and online sales had lower profit margins because they needed to be shipped to customers' homes.

However, when the pandemic forced Macy's to close all brick-and-mortar stores to in-person shopping, the company embraced its digital channel. The move is paying off. Interestingly, online sales are making Macy's stores a better asset. E-commerce sales in regions where Macy's has a physical location are three times higher than in regions where it does not. Now that management sees the added benefits, they are thinking twice about closing stores.

Increasing sales are flowing to the bottom line

During the pandemic, Macy's management has made some permanent changes that have reduced expenses. The company slashed 3,900 corporate jobs in a move estimated to save $630 million annually. The company also closed its office in San Francisco to lower costs permanently as part of the strategy.

The moves are paying off. Macy's reported earnings before interest, taxes, depreciation, and amortization (EBITDA) were $757 million in Q3, more than double the $300 million it earned in the metric in 2019. Similarly, Macy's EBITDA in the first three quarters of 2021 is $1.9 billion, compared to $1.1 billion in 2019.

It's no wonder the markets love Macy's stock right now. And since the company's fundamental prospects have improved due to effective cost cuts, the move higher seems justified.