Synopsys, Inc (NASDAQ:SNPS) provides a platform on which engineers design and test integrated circuits, commonly known as "chips," among other software applications. The company has been public since 1992 and has grown to be one of the largest software companies in the world.

If you have been shopping for a car lately or just driven by a dealership with a half-empty parking lot, you know that there is a severe supply shortage of automobiles. The reason for this is simple: They cannot source enough chips to make new automobiles. There are dozens of chips in new automobiles, on average, and this number will only grow with increasingly "smart" cars. Both General Motors (NYSE:GM) and Ford (NYSE:F) have temporarily halted factory production at various times during 2021 due to the shortage.

Synopsys doesn't make the chips; it makes the software that chip makers use to design and test the chips. Synopsys is also a play on the explosive growth in the artificial intelligence (AI) market. The company estimates the AI market will grow to $72 billion by 2025, and AI developers rely heavily on technology from Synopsys. The demand for the company's services has likely never been stronger as the company is essential to alleviating our current shortage, and its technology is crucial to the future of AI. Synopsys is a software-as-a-service (SaaS) company which means they receive annual recurring revenue from customers. This model is favorable to software licensing as the revenue stream is steady and recurring. Unlike many other SaaS companies, Synopsys customers are often locked into two- or three-year contracts rather than requiring annual renewal. This further stabilizes revenue and reduces customer churn.

The strong demand trends are evidenced by the company's steadily increasing revenues. Top-line revenue for fiscal 2017 was $2.7 billion. Over the trailing 12 months, this number is up to $4.1 billion. Diluted earnings per share (EPS) has risen from $0.88 per share to $4.80 per share over this period. As one would expect, cash is flowing into the company's coffers as well, to the tune of $1.3 billion in cash from operations (CFO) over the prior 12 months.

As shown above, the company is also increasing margins, including the EBITDA margin, which is an impressive 22%, along with the revenue and CFO. These fundamentals allow the company to keep a pristine balance sheet. At last report, Synopsys had over $1.5 billion in cash, cash equivalents, and short-term investments on the balance sheet with only $25 million in long-term debt. According to the company, management plans to use this capital to invest in the business, conduct acquisitions, and buy back stock.

Synopsys stock is currently trading near all-time highs. The current P/E ratio of 75 is also higher than it has been since the beginning of 2020. However, because of the increases in EPS expected, the forward P/E is just 47. This is lower than the stock has traded since the pandemic hit in early 2020. Because of the clean balance sheet, the EV/EBITDA ratio is even more favorable at 53 currently and just 34 on a forward basis. The spreads between the current valuation ratios and the forward valuation ratios, shown below, indicate that the stock still has room to grow. The planned stock buybacks will also help to increase the earnings per share and provide support for the stock price. 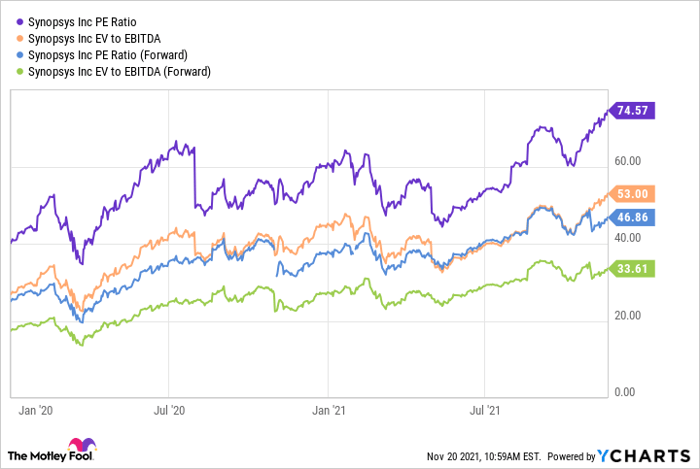 Synopsys is run by co-CEOS whose expertise is unquestioned. Co-founder Dr. Aart De Geus has been with the company since 1986 and has won numerous awards during his tenure. Dr. Chi-Foon Chan, the other co-CEO, holds a M.S. and Ph.D. in computer engineering and a B.S. in electrical engineering and has been with the company since 1990. The industry-specific expertise of the top brass shows that the technology is of paramount importance. The business metrics and revenue increases will come from having the best product possible.

Synopsys has made great gains for shareholders, and yet the best days are likely still ahead. The company is essential to the technologies of today and tomorrow, when AI, smart technologies, and machine learning will be the norm. Revenues and other metrics are growing, stock buybacks will support shareholders, and product demand is high. Management has the expertise and experience to lead the company, and its stock, to even greater heights over the long term.