Consolidation in the highly competitive cannabis industry is inevitable. Many marijuana producers in Canada are struggling to grow their market share, and the easiest way to get bigger is through mergers and acquisitions (M&A).

Cannabis producer Sundial Growers (NASDAQ:SNDL) has been busy with its own M&A this year, but investors shouldn't also rule out the potential for a larger company to acquire it. Here are some of the signs I think the company could be trying to make itself a more attractive acquisition target. 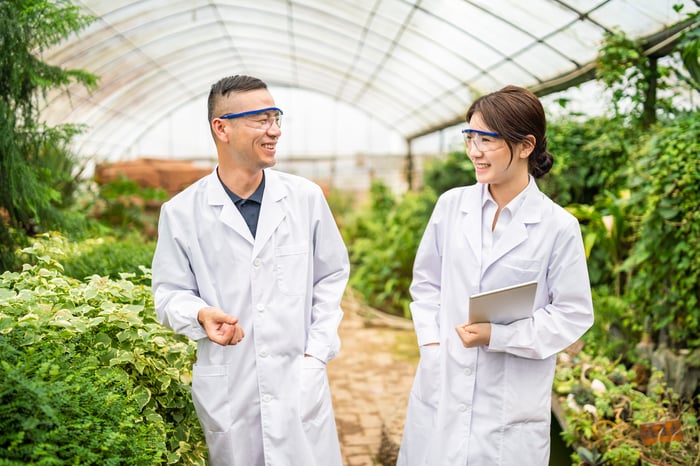 1. It is hoarding cash

Earlier this year, amid the meme hype, Sundial's shares skyrocketed to a high of $3.96. The company took advantage of its newfound popularity and issued shares multiple times. After announcing the closing of the second offering in February, it had an unrestricted cash balance of 610 million Canadian dollars -- more than 10 times the CA$60 million in cash it reported as of Nov. 9, 2020.

Since then, Sundial has been making moves to invest and acquire businesses, including liquor store retailer Alcanna, which it announced in October. But what's striking about the move is that the CA$346 million purchase will be funded entirely through shares. Despite its wheeling and dealing, Sundial's unrestricted cash balance as of Nov. 9 was CA$571 million, showing only a modest change since February.

For an industry that's burning tons of cash, having a strong cash balance can make a company like Sundial an extremely attractive acquisition target. What makes it even better is that Sundial has no debt on its books.

2. The company's debt remains at zero

As of the end of Sundial's third quarter, for the period ending Sept. 30, the company had no debt on its books, and the main long-term liabilities it had related to lease obligations, which were valued at just over CA$20 million. All of its liabilities totaled CA$83.6 million, which is not only less than its cash balance but even lower than its marketable securities balance of CA$119.6 million. A year ago, the company did have long-term debt and its total liabilities were close to double the size -- CA$151.8 million.

Debt can be undesirable, especially if a business taking on the acquisition already has plenty of its own. With Sundial, a cannabis company could acquire the business while significantly improving its debt-to-equity ratio, and thus, making itself more attractive to investors. By keeping its balance sheet as clean as it can, Sundial is an acquisition that wouldn't be overly complex.

3. Sundial has been transforming its operations

Through multiple acquisitions this year, including Alcanna and cannabis retailer Spiritleaf (the deal closed on July 20), Sundial has been pivoting away from being a producer to being a large retailer.  When counting the stores from marijuana retailer Nova Cannabis (which Alcanna has a controlling stake in), Sundial will have more than 170 pot shops across Canada. Plus, Alcanna itself has another 170+ liquor stores to add on top of that tally.

Although it's too early to tell how different Sundial's financials will look, they are sure to get a significant boost. Over the trailing 12 months, Alcanna has reported a profit of CA$82 million on revenue of CA$697 million. Sundial, meanwhile, has incurred losses of CA$239 million while generating just CA$47 million over the same period.

However, the company has been showing progress already; in Q3, it reported an adjusted earnings before interest, taxes, depreciation, and amortization (EBITDA) profit of CA$10.5 million (versus a loss of CA$4.4 million a year ago). This was the first quarter where Sundial included results from Spiritleaf.

Through these key acquisitions, Sundial can become a much larger and more noticeable business in the cannabis industry. Plus, it will have more of an identity as a top cannabis retailer. For cannabis businesses looking to bolster market share without taking on a debt-ridden operation, Sundial could fit the bill.