The stock market has found some upward momentum this week, and the trend appeared to remain favorable heading into Wednesday's trading session. As of 8 a.m. ET, futures contracts on the Dow Jones Industrial Average (DJINDICES:^DJI) were up another 61 points to 35,774, extending the huge gains on Monday and Tuesday. S&P 500 (SNPINDEX:^GSPC) futures rose 10 points to 4,695, and Nasdaq Composite (NASDAQINDEX:^IXIC) futures picked up 48 points to 16,366.

We're in a relative lull with respect to companies reporting earnings, with the majority of businesses already having reported their financial results for the late summer and early fall. However, some stragglers are still offering their views on how economic conditions are affecting their specific businesses. This morning, Stitch Fix (NASDAQ:SFIX) shares are headed lower after the company reported its latest financial results late Tuesday. However, another stock that hasn't gotten as much attention from the investing community is moving higher after a favorable report. Below, we'll see why Stitch Fix disappointed investors, and then we'll reveal the stock that's riding a nice trend higher. 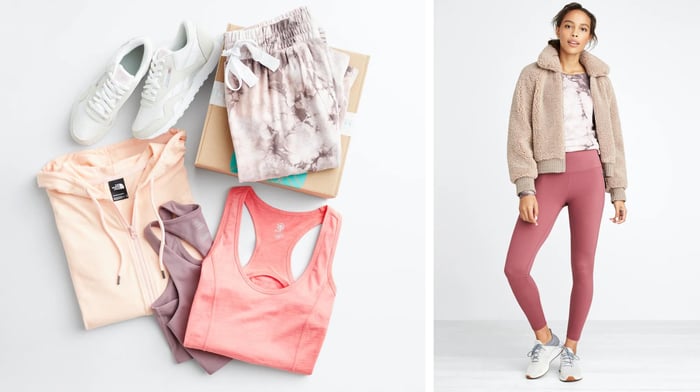 Shares of Stitch Fix plunged more than 25% in premarket trading on Wednesday morning. The provider of subscription-based fashion delivery didn't tell investors what they wanted to hear in its fiscal first-quarter financial report.

Stitch Fix's numbers for the quarter were reasonably solid. Revenue moved higher by 19% year over year to $581 million, with the company attracting 417,000 more customers to bring its total active client count to 4.18 million. Revenue per client rose 12% from year-ago levels, with strong top-line growth coming from the women's and kids' segments. Unfortunately, higher sales didn't turn into better profitability, as Stitch Fix saw last year's modest earnings turn into a loss of $0.02 per share during this year's period.

More troubling for investors was Stitch Fix's outlook. The company said it expects net revenue for the fiscal second quarter to come in between $505 million and $520 million. Those numbers would be flat to up just 3% from year-ago levels, signaling that the holiday season simply isn't likely to provide the kind of rebound shareholders have been counting on seeing from Stitch Fix. For the full fiscal year, moreover, Stitch Fix expects sales growth to slow to high single-digit percentages.

Many have waited for Stitch Fix to gain traction, but the clothing delivery specialist hasn't been able to take full advantage of the boom in e-commerce in recent years. That's a troubling sign that Stitch Fix might not be able to reach the potential it once had.

On a more positive note, shares of Thor Industries (NYSE:THO) moved higher in premarket trading, jumping briefly as much as 10% before settling for a 4% rise as of 8 a.m. ET. The recreational vehicle manufacturer continued to see tailwinds from immense demand for RVs as Americans return to the road.

Many of Thor's results from its fiscal first quarter were records for the company. Revenue soared 56% year over year to $3.96 billion, while earnings of $4.34 per share were more than double what the company earned in the same period last year. Thor delivered more than 88,100 vehicles, demonstrating operational efficiency that overcame major supply chain and labor obstacles. Thor reported improving gross margin that helped pull more money down to the bottom line.

Moreover, all signs point toward continued success for Thor. The company's backlog of RV orders more than doubled year over year, jumping above the $18 billion mark. CEO Bob Martin believes that demand is so strong that it could take until 2023 for Thor to see dealers fully restocking their inventories of RVs.

Many had feared Thor might suffer in the face of the logistical difficulties facing manufacturers in many industries right now. That wasn't the case, and shareholders are happy to see the RV maker benefit from some of the strongest conditions ever.