With electric vehicle (EV) maker Tesla valued at more than $1 trillion and Rivian, which has so far produced fewer than 200 vehicles, valued at more than $100 billion, value-focused investors may find staying away from the EV stock space to be the best course of action right now. But the truth is that there are ample undervalued opportunities even in this hot segment.

Let's look at three such hidden gems in the electric vehicle space. 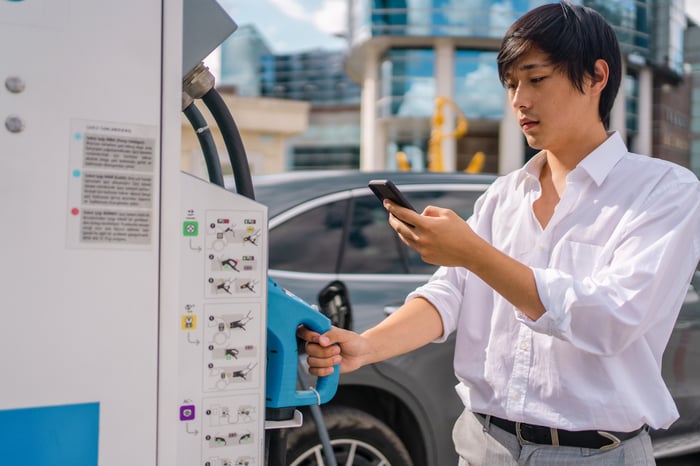 Trying to understand the valuations of EV stocks has become challenging lately. Not all EV stocks are getting valued the same way. As an example, consider Nio (NYSE:NIO). The company sold 66,395 vehicles in the first nine months of 2021. Yet, its market capitalization is less than that of Lucid Group and Rivian, both of which have sold far fewer vehicles so far. 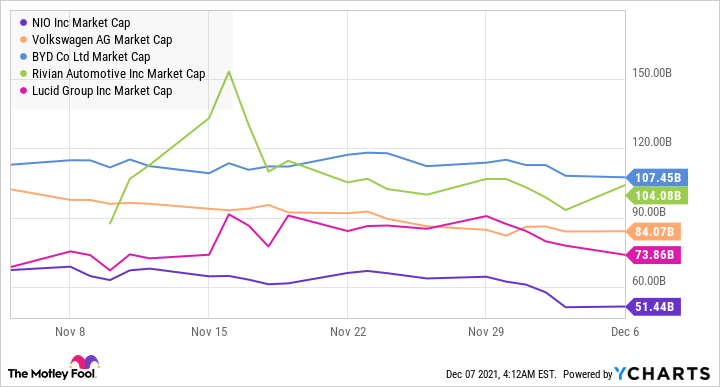 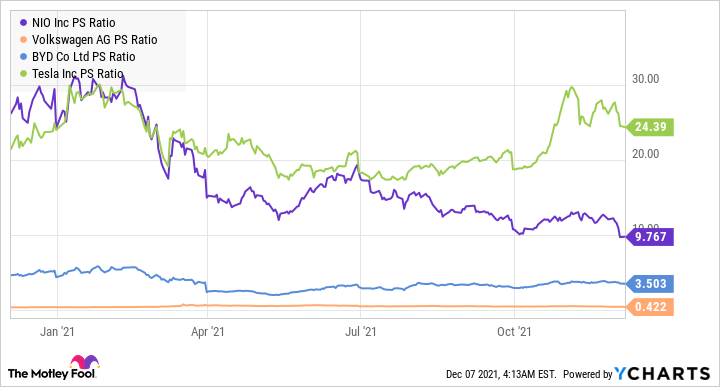 For sure, Tesla commands a higher ratio for being the EV pioneer, with a strong brand image and innovative offerings. However, the premium compared to Nio looks outsized.

Talking more about differences in EV valuations, pure-play EV manufacturers -- that offer only EVs -- typically get valued higher compared to legacy automakers, which are now entering in the EV segment. This is likely based either on hype, or on the opinion that pure-play EV makers can offer better EVs than legacy automakers. Neither of the two seems like a valid reason to avoid legacy automakers with solid EV ambitions.

Two such companies are BYD (OTC:BYDDY) (OTC:BYDD.F) and Volkswagen (OTC:VWAGY). As the above graph shows, the stocks of both these companies trade at a much lower price-to-sales ratio than that of Tesla or even Nio. Whichever way you slice or dice it, Nio, BYD, and Volkswagen stocks look better valued than most of their EV peers.

Investors will find Nio attractive for more than one reason. To begin with, the company operates in a leading and fast-growing market. Of the 2.6 million EVs sold globally in the first half of 2021, roughly 1.1 million were sold in China alone. Furthermore, in the first half of 2021, the number of EVs sold in China was equal to that sold in the country in all of 2020.

Nio reported strong vehicle deliveries for November. Except for October, when the company reported lower deliveries due to planned upgrading of its manufacturing lines, Nio's deliveries are largely on an upward trend.

The company faces stiff competition from local players, including BYD, Xpeng, and Li Auto, as well as global EV companies including Tesla. Nio is doing well so far despite the competition. Moreover, it is planning to start deliveries of its new luxury sedan, the ET7, early next year. The new sedan has some of the best features and technology available and should further boost Nio's growth.

While investors are focused on upcoming EV stocks, established Chinese automaker BYD has made a place for itself in the EV segment. According to CleanTechnica, BYD controls the highest share, 17%, of China's EV market, including plug-in hybrids. That's higher than the 16% market share controlled by a joint venture between SAIC Motor, General Motors, and Liuzhou Wuling Motors. By comparison, Tesla holds roughly 11% share of China's EV market.

With a high focus on EVs, these will likely form an increasingly higher portion of BYD's revenue mix in the coming years.

EV investors would surely find value in top automaker Volkswagen. In the next few years, the company plans to invest 35 billion euros in electric mobility. It aims to increase its EV deliveries to 20% of its sales by 2025. By 2030, the company targets 60% of its sales in Europe to be EVs.

In the first nine months, Volkswagen delivered nearly 7 million vehicles globally. Of these, roughly 293,000 were fully electric. An additional 246,000 were plug-in hybrid vehicles. So, electric or hybrid vehicles accounted for around 7.8% of the company's deliveries. For perspective, Tesla delivered 627,572 vehicles in the first nine months of this year. So, even though EVs form a small percentage of Volkswagen's total vehicle deliveries, its absolute EV deliveries are huge and will continue to grow. In short, the stock can surely find a place in your EV portfolio.