Please ensure Javascript is enabled for purposes of website accessibility
Log In Help Join The Motley Fool
Free Article Join Over 1 Million Premium Members And Get More In-Depth Stock Guidance and Research
By Rich Duprey - Jan 10, 2022 at 11:38AM

The SPAC will be entering Trump world to help launch an all-new social media platform.

President Trump is planning to return to social media in a big way, but not through the platforms offered by Big Tech. Because they summarily banned him from their sites following the 2020 elections, he is making an end run around them by launching his own platform and will be merging the Trump Media & Technology Group with special purpose acquisition company (SPAC) Digital World Acquisition (DWAC -3.51%) to create a publicly traded business.

What caught many by surprise was Trump Media's announcement to kick off December that it intended to raise $1 billion by selling shares to hedge funds and other private investors in a PIPE, or private investment in public equity, deal.

It gave the company a valuation twice what was suggested by the merger announcement with Digital World, which ended December with a gain of 24.3%, according to data provided by S&P Global Market Intelligence, and has continued running higher in January after announcing the Truth Social network app would launch on Feb. 21. 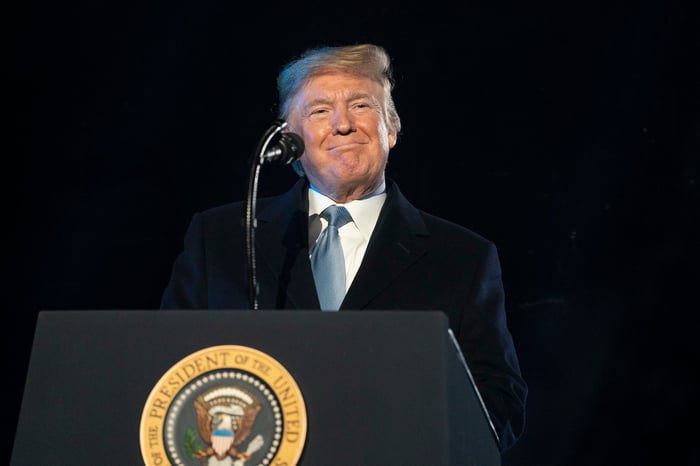 Alternatives to Big Tech social media platforms are garnering a lot of attention these days. CF Acquisition VI (CFVI -0.25%) surged 10% in December after it announced the SPAC would merge with YouTube alternative Rumble.

Conservatives have alleged the likes of Facebook, Twitter, and Alphabet's Google have conspired against them to either limit their reach or ban them from their platforms.

Numerous alternatives with a commitment to users being allowed to post and have access to unfiltered and uncensored opinions were launched.

In addition to Rumble, which recently signed a partnership agreement with Trump Media, other social networking sites such as video sharing platforms BitChute and Odyssey have taken off, as have Gab and Parler (though the latter had to mount a comeback after Amazon deplatformed it by cutting off its web services). Minds is an alt-tech blockchain-based social network.

Many still doubt Trump Media & Technology will amount to much, and the Securities and Exchange Commission (SEC) is reportedly investigating the new social media company and the SPAC over alleged talks they had prior to Digital World Acquisition raising money that violated SEC rules.

Truth Social will be a full-featured social networking platform with a subscription-based video streaming service, offering access to news, podcasts, and documentaries, among other content. Trump may once again confound the experts because he has a large and loyal following, many of whom would willingly follow him to a new platform.

Still, as with much of what surrounds the former president, though, there's a lot of kinetic confusion around his social media ambitions, and an SEC probe could throw a wrench into the machinery.