It's getting harder to read the financial results of food makers like General Mills, and the most recent quarter didn't help.

The pandemic has upended normal life in many ways, notably including how, where, and what we eat. That's created havoc for investors trying to decipher company reports to understand what is actually going on in what has been a very complicated stretch of time for food product manufacturers like General Mills (GIS -2.68%). Here's a quick look at the company's fiscal 2022 first-half results. Let's see if some further analysis can help sort things out.

As we all know, in 2020, the world was faced with a global pandemic. Several countries closed vast swaths of their economies in the hope of slowing the spread of the coronavirus. People were asked to practice social distancing, gathering places like restaurants were temporarily shuttered, and working from home became the norm for workers in many industries. 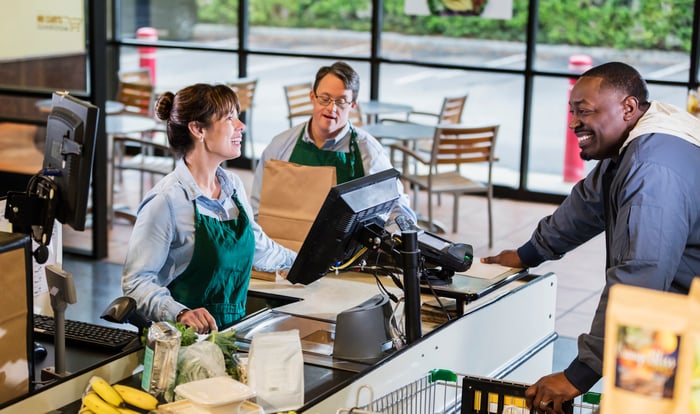 Given that backdrop, it shouldn't be too surprising that more people ended up eating at home in 2020. This was great for food product manufacturers like General Mills, which saw a spike in sales as demand skyrocketed.

Restrictions began to ease through 2021, and sales started to return to normal. The company's fiscal 2020 (ending May 31, 2020) organic sales increased 5%, with a massive 16% year-over-year gain in the fiscal fourth quarter. In fiscal 2021 (ending May 31, 2021), however, organic sales were up only 4% for the full year, with a fourth-quarter year-over-year decline of 6%. Part of the quarterly decline was related to comparisons with the windfall growth from the pandemic. If you didn't dig into the details, you'd think that General Mills was struggling.

The pandemic has created a situation where investors need to look at the company's two-year compound organic sales growth to get a more accurate picture of what's going on. Specifically, organic sales in fiscal 2021 were up by 4% over the two-year span, essentially the same as the full-year 2021 figure. The two-year compounded figure for organic sales in the fourth quarter of 2021, meanwhile, was 4%, a huge 10-percentage point change compared to the 6% year-over-year decline.

The problem for investors is that reading these reports isn't going to be any easier as fiscal 2022 unfolds.

And then there was the other big problem

As in many industries, General Mills and its peers are now dealing with inflationary pressures -- just as the impact from the spike in demand from the pandemic has started to wane. This issue is a bit more complicated. Inflation is normal in the food space, and companies eventually pass on rising costs via price hikes. The process takes time, so there's usually a lag on the earnings front as margins get squeezed over the short term.

However, thanks to dislocations from the pandemic, passing along costs has been a multistep process this time around. That risks drawing consumers' ire and could lead to demand falling off in the face of ever-higher prices. But organic sales alone don't tell you enough to understand the dual dynamics here of revenue changes from higher prices, as well as those from shifts in demand.

For example, General Mills' organic sales in the first half of fiscal 2022 rose 4%. That's actually pretty solid, all things considered. But dig into that number and you'll likely end up with a little less certainty about how good it really is. For example, overall volume was flat, with most of the gain coming from pricing. On the surface, that suggests that General Mills has been able to pass along price increases without hurting demand for its products.

Only when you dig another step down, the results get a little muddy. Organic sales in the company's North American business were off by 1%, driven by a five-percentage point increase in pricing and a six-percentage point decline in volume. General Mills' European and Australian business witnessed a one-percentage-point volume decline and flat pricing for an overall 1% organic sales decrease. There's a reason to fear that passing on rising costs in these two very large businesses (roughly 69% of sales combined) could become a problem if General Mills has to go to the well one too many times.

Offsetting the weakness in these two divisions was notable strength in the company's rebounding convenience store and foodservice business (volume up 10%, price up 13%); continued strength in pet food (10% volume, 6% price); and a solid performance in Asia (3% volume, 3% price). But these three divisions are only 31% of the total pie, and there are complex dynamics involved.

The convenience store and foodservice division, for example, is bouncing back from the pandemic hit, so the benefit here could taper off soon. The pet division's growth has been solid for years and will likely continue to be. Meanwhile, Asia is facing the same challenges as the other regional divisions, and it's hard to tell what will happen in the future.

What to watch in the next quarter

The biggest driver of performance at General Mills is its U.S. division, where volume has been the weakest in the face of price increases. So far, that weakness has been offset by other, smaller divisions, but investors should still be watching it closely when the company next reports earnings.

If this food maker can't offset inflationary pressures with price increases without materially reducing demand, margin pressure will end up lingering longer than investors might like to see. If that happens, share price weakness would likely result.