Coinbase Global (NASDAQ:COIN) has had a rough tumble since its initial public offering (IPO). The company came to the public markets on fire, trading at about $400, but that quickly faded. It has since fallen by more than a third from its all-time high, and now trades at about $235.

But could Coinbase rise back to its former all-time highs? The climb to $400 would be steep. However, Coinbase has made some interesting moves in cryptocurrencies and non-fungible tokens (NFT), which could allow it to grow rapidly. But just how realistic is a price like $400? Let's find out. 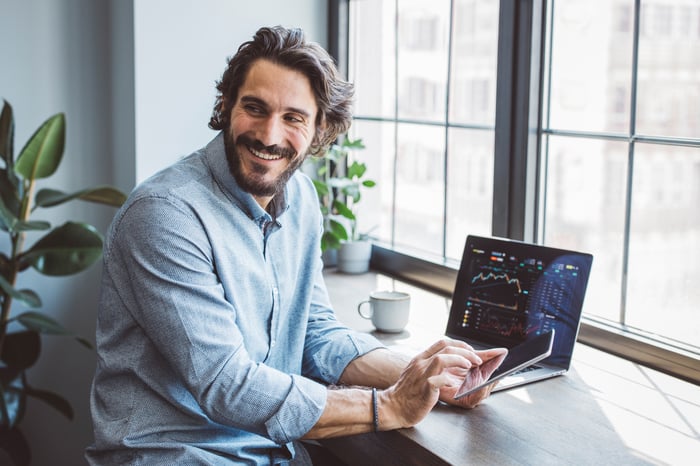 A whole new world (of cryptocurrency)

Coinbase has become the leading cryptocurrency trading platform for both crypto day traders and long-term investors alike. As the leading crypto platform, it has gained a huge global audience. Coinbase operates in more than 100 countries with at least 73 million active users. These users traded a whopping $327 billion in the third quarter, and Coinbase makes a pretty penny on each transaction. On a $250 transaction, Coinbase takes roughly 1.5% when the transaction is made with a U.S. bank account, and fees like that on hundreds of billions of dollars can add up. There might be room for competitors to undercut this, but with Coinbase as the leading crypto trading platform, many users may decide to endure the high fees over choosing a smaller trading platform.

Coinbase has been a major beneficiary of the rise in crypto popularity over the past two years. At its peak in the second quarter of 2021, Coinbase had more than $2 billion in revenue. Although Coinbase reported $1.24 billion in revenue in Q3, it still represented over 330% year-over-year growth. What is important is that, unlike other trading platforms like Robinhood Markets, Coinbase's trading volume and revenue are relatively diversified. Bitcoin and Ethereum only represented 43% of transaction revenue and 41% of trading volume in Q3.

What is even more impressive about this company is that it is generating gobs of cash. Its net income for the trailing 12 months was more than $4.5 billion, and the company generated free cash flow of over $7.7 billion in the first nine months of 2021. With this, you would think that Coinbase would be very pricy, but it is trading at a bargain of 22 times earnings, which is impressive for a company this profitable.

Coinbase also has plenty of growth opportunities in the works. It has more than 200 investments in companies in expanding markets like NFTs, decentralized finance, and Web3 infrastructure through its Coinbase Venture arm. These investments not only allow Coinbase to develop relationships with companies in emerging crypto markets, but they could also pay off in monetary terms. Coinbase is also looking to launch an NFT marketplace that competes with OpenSea, the leading NFT exchange. It is still being fine-tuned, but it is clear that Coinbase is looking to become the one-stop shop for the new wave of decentralized finance.

All of these strong performance indicators and growth opportunities could make one think that Coinbase has a real shot of hitting $400 this year, especially if it can launch and scale up its NFT platform. However, there are reasons why Coinbase could fall short of its previous highs. The primary one is that shares of Coinbase and Bitcoin are extremely correlated. When Bitcoin -- and the crypto market as a whole -- rises, Coinbase rises. If it falls, Coinbase sinks, too. With cryptocurrencies in a huge slide recently, Coinbase could continue in a similar direction. However, the crypto world is an incredibly volatile market, so if it turned around in 2022, the potential for Coinbase rising higher is very likely.

This trend makes sense because of Coinbase's business model. It makes money on transactions when users are buying, meaning Coinbase's incentives are designed to turn crypto owners into day traders. While the company could grow without doing this, it would certainly be easy and more profitable if its users were day traders buying five times a day rather than the long-term investor buying five times a quarter.

At the current price of $235, a jump to $400 would result in a 79% increase in the stock. Considering that over the past century the stock market has produced an average return of 9% to 11% every year, a result like this is not one to count on.

There are companies every year that produce returns of 79%, but that should not be expected from any particular stock. And when you consider how correlated with the crypto market Coinbase is, I don't expect the company to reach its former peak in as soon as one year.