Like any other evolving industry, the marijuana sector also consistently experiences some highs and lows. The prospects of legalization helped the sector soar last year, but legislation delays then clouded these dreams.

That doesn't mean investors should avoid marijuana stocks altogether. The industry is still growing rapidly (whether legalization happens or not), and domestic cannabis companies will continue expanding aggressively.

Despite being strong companies, some of these cannabis companies' shares suffered from the recent industry sell-off. But make no mistake: This industry has huge potential, which makes these three stocks a sure-shot buy that could make investors rich in the long run. 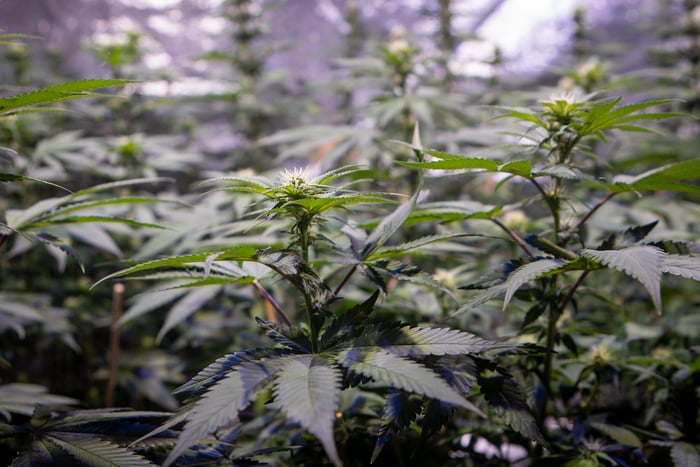 Why is this important? Cannabis is still illegal federally, so states are careful in issuing licenses; it is also a tedious process. This means holding additional licenses gives Green Thumb a huge competitive advantage over its peers.

However, the company hasn't disclosed yet how and when it plans to use these licenses. But when it does, it will have a stronghold over the U.S. cannabis market. It ended 2021 by acquiring Minnesota-based LeafLine Industries. This acquisition extended its national presence to 15 states, with a total of 73 retail stores open nationwide.

Increased traffic from 65 stores (at the end of the third quarter) resulted in another strong quarter. Total revenue surged 49% to $233.7 million from the year-ago quarter. Q3 also marked Green Thumb's fifth consecutive quarter of profitability. It reported GAAP net income of $20.8 million versus net profit of $9 million in the year-ago period.

The company opened 15 new stores in 2021. It will be interesting to see how many it opens this year, given its rapid ongoing expansion. The company took good advantage of its home state, a new cannabis market that legalized recreational marijuana in 2020. Recreational sales in Illinois hit $1.3 billion for the year.

Green Thumb ended the quarter with cash and cash equivalents of $285.8 million and outstanding total debt of $206.5 million.

Massachusetts-based Curaleaf Holdings (OTC:CURLF) isn't a profitable cannabis stock yet, but with full-year revenue closer to $1 billion, it won't be long before the company starts enjoying profits. The company announced in late December 2021 it will acquire Bloom Dispensaries, which will increase its store count to 16 in Arizona as well as 128 nationwide. It was smart of Curaleaf to expand its footprint in Arizona, which recently legalized recreational marijuana.

Curaleaf's strategy of making timely acquisitions has been working out in its favor in the last two years. In its recent third-quarter results, the company showed a revenue jump of 74% year over year to $317 million. Its adjusted earnings before interest, tax, depreciation and amortization (EBITDA) came in at $71 million, versus $42 million in the year-ago quarter.

Despite going on an acquisition spree, Curaleaf also kept its balance sheet stable. It ended Q3 with $317 million in cash and $342 million in outstanding debt (net of unamortized debt discounts). The company remains confident it will achieve full-year revenue at the lower end of the range of $1.2 billion to $1.3 billion, which could also help it achieve profitability this year.

Illinois-based Cresco Labs (OTC:CRLBF) doesn't have a vast presence like Green Thumb and Curaleaf yet. But even with just 45 stores, the company is catching up.

Cresco targets limited-license markets like Pennsylvania, Illinois, and Ohio, which has helped it create brand awareness for its brands like Mindy's Edibles, High Supply, and more. It allowed the company to be able to compete with the bigger multistate players. The company also took advantage of the cannabis boom in its home market of Illinois, where it operates 10 dispensaries.

The company grew its revenue 41% year over year to $215 million in its recent third quarter of 2021. It earned $106.2 million in retail revenue in Q3, and the rest came in from wholesale revenue. Cresco also recorded adjusted EBITDA of $56 million, versus $40 million in the year-ago quarter. The company reported a net loss of $263,000 in the quarter that disappointed investors, compared to a net profit of $25 million in Q3 2020. Management stated the company's "exit from third-party distribution agreements in California" caused a noncash impairment charge of around $290 million that resulted in the loss.

However, Cresco reaffirmed its 2021 guidance. The company still expects:

Cresco ended the quarter with cash and cash equivalents of $252.8 million, which is allowing it to continue with its expansion plans. In December, it opened its 13th store in Florida, bringing its total to 45 nationwide.

Are these pot stocks right for you?

Investors are skeptical about marijuana stocks now, but Wall Street remains optimistic. Growth stocks take time to show their full potential; a little bit of patience is required. Analysts see upsides of 77%, 127%, and 142% for Green Thumb, Curaleaf, and Cresco Labs' stock, respectively, in the next 12 months. All three pot stocks are trading more than 50% below their 52-week highs, making it the right time to include them in your portfolio.