Biogen (NASDAQ:BIIB) investors recently received an unwelcome surprise from an important government agency. The phrase "coverage with evidence development" (CED) might not sound too serious, but these words from the Centers for Medicare & Medicaid Services (CMS) were heavy enough to put Biogen's stock price under pressure on Wednesday, Jan. 12, 2022.

The CMS decision was tough on Biogen stock price in the short term, but what do the next five years have in store? Here's what to expect up ahead. 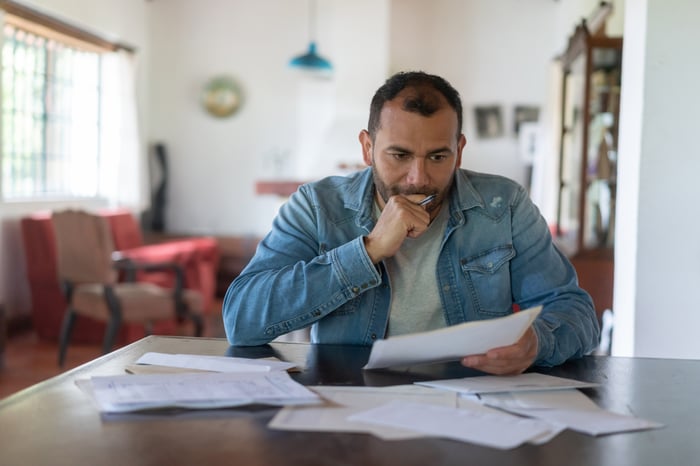 The latest draft decision regarding new Alzheimer's disease drugs isn't set in stone yet. If advocacy groups like the Alzheimer's Association can't get CMS to change its stance before it's finalized, though, Aduhelm's commercial launch will continue to disappoint.

You may recall, Aduhelm earned a highly controversial U.S. Food and Drug Administration (FDA) approval to treat Alzheimer's disease patients last June. Earlier this year, CMS raised premiums sharply in order to pay for Aduhelm. After much careful consideration, though, CMS agreed with the FDA's independent advisory committee that voted strongly against Aduhelm's approval instead of the FDA.

Instead of a national coverage determination, CMS said Medicare would only pay for Aduhelm, and drugs like it, for patients in qualifying clinical trials. The agency hasn't been perfectly clear about what qualifications it's looking for, but some patients unknowingly receiving a placebo is at the top of the list.

Aduhelm is an antibody that removes sticky amyloid protein fragments before they aggregate into plaques that may or may not contribute to worsening symptoms of dementia. Amyloid removal drugs might slow the progression of Alzheimer's disease dementia for some, but the evidence is thin at best. One thing we know for certain, though, is that anti-amyloid drugs present potential for side effects that range from headaches to life-threatening brain bleeds. Instead of harping on the drug's price, which Biogen recently slashed in half to $28,200 per patient per year, CMS based its decision on the poor safety-to-benefit ratio elucidated during clinical trials.

In the absence of a national coverage policy, it's up to local contractors that pay Medicare claims to decide if Aduhelm is covered for each patient who requests it on a claim-by-claim basis. So far, this situation isn't working out at all for Biogen. Third-quarter Aduhelm sales came in at a disappointing $300,000.

Lecanemab to the rescue?

CMS could change its tune regarding amyloid removal drugs for Alzheimer's disease dementia near the end of 2022, but it's a long shot. In March, Biogen finished enrolling patients in a phase 3 trial with lecanemab, an experimental antibody that did a great job at removing amyloid in a phase 2 study.

Unfortunately, removing all that amyloid didn't lead to measurably slower rates of decline for patients receiving lecanemab versus placebo on the standard clinical dementia rating (CDR) test. That's a problem because a benefit as measured by the CDR test is the primary endpoint of lecanemab's ongoing phase 3 trial.

Biogen's going to have a hard time pushing the needle forward over the next five years without some fireworks from its late clinical-stage pipeline. In the third quarter, generic competition pushed sales of the company's former lead drug, Tecfidera, 48% lower year over year -- and this isn't the only key revenue stream drying up at the moment.

Spinraza, a treatment for a very limited population of spinal muscular atrophy patients, is also buckling under competitive pressure. Evrysdi from Roche and Zolgensma from Novartis pushed third-quarter Spinraza sales 10% lower year over year to $444 million.

Recently, Biogen licensed a follow-on to Spinraza called BIIB115 from Ionis Pharmaceuticals. It's going to be a long time before this candidate has a chance to contribute any revenue to Biogen's sinking top line. It hasn't even started clinical trials yet.

Biogen recently highlighted positive phase 3 results for zuranolone, a potential new depression drug with a strong differentiating factor. Unlike antidepressants used today that take months of constant dosing to provide a benefit, zuranolone appears to get the job done with a short two-week course.

If approved, Biogen will have to share zuranolone revenue with its collaboration partner. In 2020, Biogen gave Sage Therapeutics $1.5 billion upfront to jointly develop and commercialize the potential new depression drug.

With a lot of irons in the fire, it isn't impossible for Biogen to return to growth over the next five years. Considering the risks, though, buying this biotech stock probably isn't the best investment decision you can make right now.