The molecular diagnostics company is bouncing back from its two-year low.

The company didn't release any news on Monday, but its stock has been steadily climbing over the past week since it fell to $6.06 on March 15. At this point, investors may be more willing to take a flyer on Invitae, especially since Cathie Wood, the CEO for the Ark Invest family of exchange-traded funds (ETFs), has an interest in the stock. It is the No. 23 holding in Wood's Ark Innovation ETF with 18,959,702 shares. 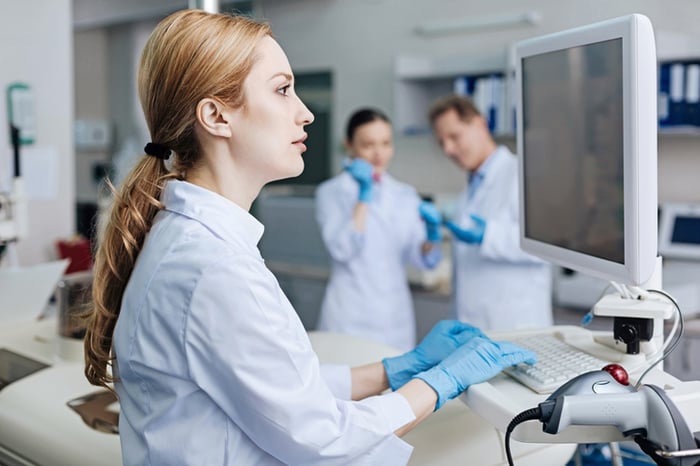 The recent trend in the markets away from tech stocks has impacted Invitae and may weigh on its shares for some time. The company, while it has had great revenue growth, has yet to turn a profit. Invitae, with its low share price and relatively small market cap ($1.82 billion), is likely to be volatile.

The biotech company has the potential to be a disruptor in the healthcare industry, with its concept of personalized medicine, based on genomic testing. It has had consistent double-digit revenue growth, including a 65% jump, year over year, to $460 million in 2021, with the largest of that, $280 million, coming from oncology screening.

The big question, as with so many biotech stocks, is when will Invitae turn a profit? It posted an earnings per share (EPS) loss of $1.80 in 2021, which was an improvement from the EPS loss of $4.47 it posted in 2020. The company predicts 40% growth in revenue in 2022, to $640 million, but still expected a cash burn of $200 million. As long as the company continues to have momentum, it appears to be a good long-term stock, albeit with risk. The company reported billable volume of 1.17 million in 2021, up 77% year over year with active healthcare provider accounts up to 18,458, more than twice what they were in 2020. Invitae CEO Sean George, in the company's fourth-quarter earnings call, pointed out that better genetic information will be a catalyst for better clinical decisions in the future and Invitae has an early-adopter advantage in that space.