Please ensure Javascript is enabled for purposes of website accessibility
Log In Help Join The Motley Fool
Free Article Join Over 1 Million Premium Members And Get More In-Depth Stock Guidance and Research
By James Brumley - May 27, 2022 at 2:51PM

The COVID-19 pandemic is still with us, but the effort to end it is starting a new chapter.

Shares of drugmaker Novavax (NVAX 11.38%) are up to the tune of 18.9% as of 2:11 p.m. ET Friday, according to data from S&P Global Market Intelligence, thanks to a confluence of events that work in the company's favor.

Chalk it up to a resurgence of COVID-19 infections that's too serious to be ignored.

No, Novavax wasn't one of the early developers of a COVID-19 vaccine. But the company has continued to work on one all the same. Notably, its solution isn't rooted in messenger RNA (mRNA) that has caused some people to balk at the jab. Novavax's NVX-CoV2373, rather, is a more conventional protein-based option that should prove more palatable to individuals worried an RNA-based injection might cause unforeseen and irreparable physical harm. Although the drug has been approved in some overseas markets, Novavax announced on Thursday that the Food and Drug Administration's (FDA's) Vaccines and Related Biological Products Advisory Committee will consider NVX-CoV2373 as another inoculation option for the all-important U.S. market.

This prospective alternative couldn't have arrived at a better time. 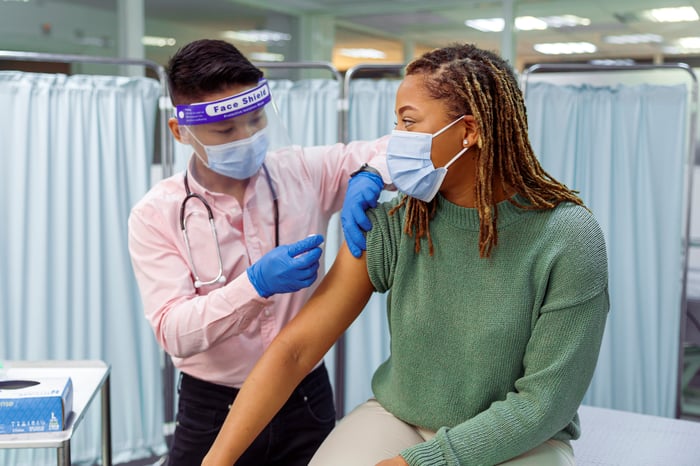 COVID-19 is still here and continuing to spread globally. The Centers for Disease Control and Prevention (CDC) reports the U.S. is averaging nearly 110,000 new cases per day at this time, up from less than 30,000 per day as of early April.

Due to this renewed and rapid spread, on Thursday President Biden unveiled a new federally funded initiative to support the fight against the pandemic. Although Pfizer's Paxlovid was the only antiviral mentioned by name within the White House website's official announcement, Novavax's NVX-CoV2373 could become part of the initiative's preferred drugs if the FDA green lights it this coming month.

Generally speaking, speculating on drug approvals can do more harm than good. The practice not only requires deep knowledge of pharmaceutical science but an understanding of investor psychology. The market isn't always rational when it comes to pharmaceutical development.

This is a scenario, however, where the upside is clear and uncomplicated.

It's conceivable that COVID-19 will never really go away, necessitating ongoing vaccinations. Continued mutations of the original virus only enhance the possibility that previously developed vaccines will become increasingly ineffective. With or without a looming end to the pandemic, the number of RNA-based coronavirus inoculations in the United States is plateauing at just under 80% of the population, according to CDC data. Novavax's new type of vaccine, which is highly effective against the original coronavirus and particular variants, translates into potential revenue growth. The stock's 80% rout since December only bolsters the speculatively bullish case for Novavax shares now.