Please ensure Javascript is enabled for purposes of website accessibility
Log In Help Join The Motley Fool
Free Article Join Over 1 Million Premium Members And Get More In-Depth Stock Guidance and Research
By Luke Meindl - Aug 5, 2022 at 9:10AM

The electric vehicle revolution rolls on, creating increased interest in these two carmakers. But which has more upside potential?

Electric vehicles (EVs) have taken the car market by storm in recent years, so much so that traditional auto manufacturers are now aggressively investing in the space. Ford Motor Company (F -1.67%), for example, recently outlined its already ambitious plans to ramp up EV production in the coming years. This puts pressure on pure-play EV businesses like Tesla (TSLA -2.05%), which is the clear leader in this segment of the auto industry.

According to Market Research Future, the global electric vehicle market is forecast to be worth $957 billion by 2030, translating to a compound annual growth rate (CAGR) of 24.5% from 2022. That has positive implications for all the EV stocks out there at the moment. Between the pure-play EV leader Tesla and the old-school automaker Ford, which stock will end up benefitting more? Let's take a closer look. 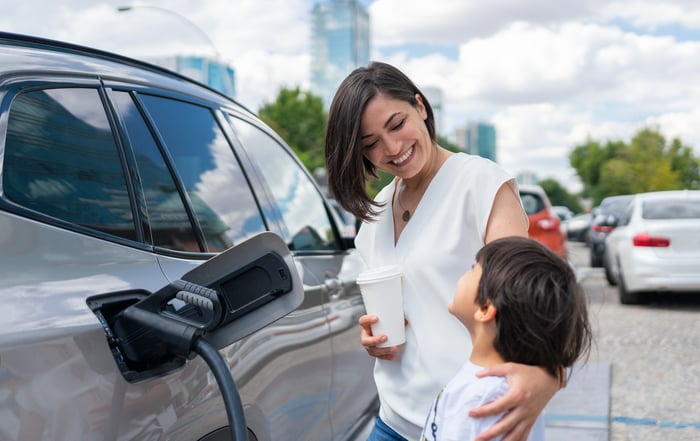 Tesla is the pacesetter for now

At the end of 2021, Tesla controlled over 26% of the global electric vehicle market. In its second quarter of 2022, the EV leader's total revenue climbed 41.6% year over year, up to $16.9 billion, and its adjusted earnings per share surged 56.6% to $2.27. Both production and deliveries declined 15.3% and 17.9% from a quarter ago, respectively, down to 258,580 and 254,695. The sequential pullback was linked to a COVID-19-related shutdown in its Shanghai factory and ongoing supply chain bottlenecks, but both production and deliveries still grew 25.3% and 26.5% on a year-over-year basis, respectively. In the past 12 months, Tesla has delivered 1.1 million cars to consumers.

Regardless of fresh headwinds, the company still expects to achieve 50% average annual growth in vehicle deliveries over a multi-year time horizon. The EV giant is also making headway on the profitability front, with its gross and operating margins expanding 89 and 358 basis points from a year ago in Q2, up to 25% and 14.6%, respectively. For the full year, Wall Street analysts forecast its total revenue to soar 57.6% year over year to $84.8 billion and its adjusted earnings per share to reach $11.81, equal to a 74.2% uptick. That's superb growth even before considering the current macroeconomic backdrop.

Ford is starting to make some noise

Where Tesla paved the way for the EV industry, Ford took a bit longer to ramp up its EV operations. In its second-quarter outing, the traditional automaker grew total revenue by 50.2% year over year, up to $40.2 billion, and its diluted earnings per share increased 14.3% to $0.16. Earlier in the year, Ford management detailed its grand plans to produce 600,000 EVs by 2023 and 2 million by 2026. In the press release, it stated that the company has added the battery chemistries and secured the necessary battery capacity contracts to achieve the ambitious goals.

If completed fully and on time, Ford's electric vehicle CAGR would eclipse 90% through 2026, implying a growth rate of more than double that of the rest of the industry. For context, the company only sold 15,527 EVs in the second quarter of 2022, so it will need to really ramp up production to meet its stated goals. But, given that it has pledged to invest more than $50 billion in its EV portfolio through 2026, it looks like the company is putting a lot of resources behind its ambitious efforts. This year, analysts project the company's top and bottom lines to rise 15.8% and 23.3%, respectively.

Which stock should investors pounce on today?

Though I respect Ford's ambitious production plans, Tesla is my favorite of the two today. That's not to say Ford won't be successful in the EV arena -- the industry is clearly vast enough to allow for several success stories. I just think Tesla is the better play right now and has more upside potential over the long run. And given that the EV leader's stock price is down 12.4% year to date, now might be a good time to accumulate shares.