Consumers have really spent a lot of their built-up savings this year.

The U.S. consumer has been in a place of strength since the pandemic started in early 2020. It may sound counterintuitive, given that during the early months of the pandemic, unemployment surged and broad swaths of the economy closed for months at a time.

But consumers were also spending less as they hunkered down in order to prevent the spread of COVID-19. Numerous stimulus bills and the ultra-low interest rate environment also added to their savings.

That story has changed recently, however, as the high-inflationary environment has begun to drain the savings of Americans, leading them to take on more debt. Staring down the barrel of a potential recession next year, is the U.S. consumer officially in trouble?

It's quite remarkable to look at the fluctuation in recent years of the U.S. personal savings rate, which is defined as personal savings as a percentage of disposable personal income. Personal savings hit a record high by a large amount early on in the pandemic but have now sunk to record lows. 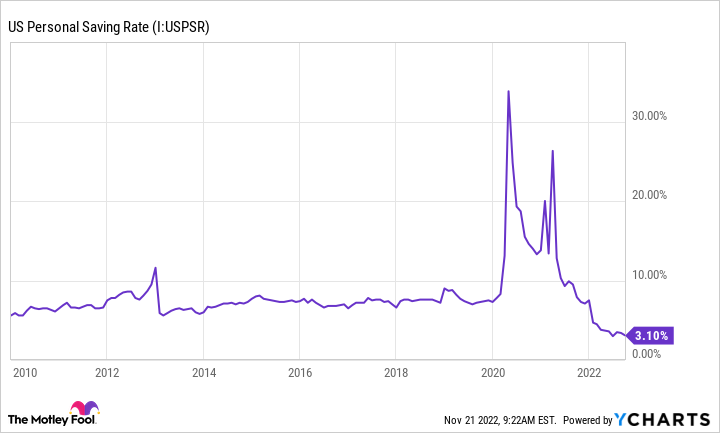 That's because inflation has hit American pocketbooks hard, rising to the highest level seen in more than 40 years and resulting in higher prices everywhere from the gas pump to the grocery store.

There has been wage growth, with wages and salaries up about 5.1% in September year over year, but that has not been enough to keep up with inflation, which has been up more than 8% year over year for a large part of 2022.

The consumer is taking on more debt

The other concerning factor is that the consumer now has much more debt, perhaps due to this reduced savings rate, which has forced them to drive up their credit card balances. 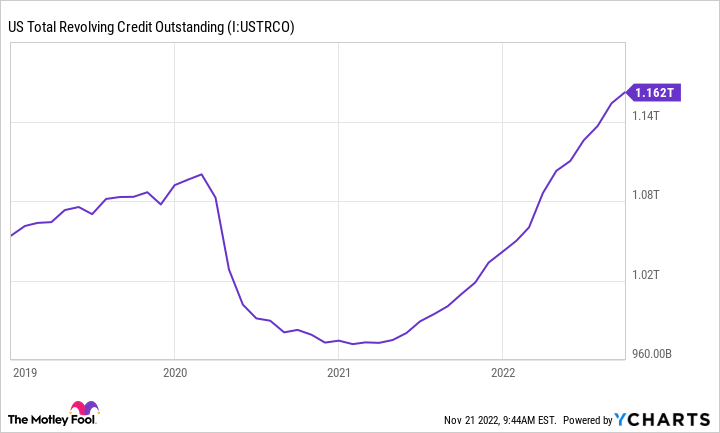 U.S. revolving debt, which includes credit card balances, has surged higher in 2022 at an alarming rate. In fact, household debt increased at the fastest level seen in 15 years during the third quarter, while card balances climbed more than 15% in the third quarter year over year, the largest annual increase in more than two decades.

"Credit card, mortgage, and auto loan balances continued to increase in the third quarter of 2022, reflecting a combination of robust consumer demand and higher prices," Donghoon Lee, an economic research advisor at the New York Federal Reserve, said in a research report. "However, new mortgage originations have slowed to pre-pandemic levels amid rising interest rates."

Credit quality has been extremely strong since the pandemic began, with most major banks and credit card lenders reporting historically low levels of delinquencies and charge-offs, which is debt unlikely to be collected and a good indicator of actual loan losses.

But there are signs that conditions are starting to normalize. In October, most of the major credit card players in the U.S. reported an uptick in delinquencies and charge-offs.  According to analysts, five of the major credit card issuers -- Capital One, American Express, Synchrony, Bread Financial, and Discover -- are still at levels of delinquencies 15% lower than in 2019, while charge-offs are 30% below 2019 levels, so normalization is to be expected.

But interestingly, Capital One and Bread Financial, which have more exposure to subprime borrowers, saw charge-offs surge 70 basis points (1 basis point = 0.01 percentage point) and 110 basis points, respectively. For Capital One, that's more than double the increase in charge-offs they've seen in October over the last five years, excluding 2020. This is generally the theme that is being seen, where the normalization of credit is accelerating faster among lower-income borrowers.

How worried should investors be?

There are clearly some worrying signs about the financial health of the consumer, who has spent a large amount of their savings and is now taking on more debt. Furthermore, student debt payments will resume next year, and mortgage and used-car values are starting to decline.

If there is a significant recession next year and unemployment shoots higher, the consumer could really struggle, given that they won't have the same cash flows to continue to cover all of their expenses.

Currently, most economists expect unemployment to climb to around 4.6% next year, according to a Reuters poll, with the high estimate closer to 6%. A sharp rise in unemployment could be very detrimental to the consumer.

But if it's more gradual, things might not get too bad, and as I mentioned, some normalization is to be expected. This is certainly a trend investors will want to monitor because a hurt consumer can do a lot of damage to the economy and likely many stocks in your portfolio.

Here's Why Doximity Climbed 28% in November

Why Did Shares of Block Rise 13% in November?

These Stalwart Stocks Stayed Strong in a Sagging Market

Should You Invest in Small-Cap Stocks?
358%