After I spent last week focusing on the company with the longest annual dividend increase streak in Diebold, I want to turn your attention to another extremely consistent dividend-paying real estate investment trust, Realty Income .

Safety in numbers
If Diebold is the king of kings when it comes to dividend streaks, then Realty Income is the queen of queens! I'll get to what I mean by that a little later. In the meantime, let's take a closer look at what Realty Income does and why it's a clear outperformer in its sector.

Realty Income is a retail REIT: It purchases properties throughout the U.S., then turns around and leases out its properties to mostly well-known companies in long-term leases. The longer the lease, the more guaranteed the cash flow and the higher Realty Income's crucial occupancy rate.

In Realty Income's second-quarter results released last month, the company disclosed $211 million worth of investments in 145 new properties, bringing its total property count to 2,762 as of the June-ended quarter. Occupancy rates for those properties rose 70 basis points to 97.3% from 96.6% in the first-quarter. Earnings per share saw a slight drop, but that can be primarily affected by share issuances and the absence of property sales, so a much more accurate determinant of retail REIT health is funds from operations. FFO for Realty Income in its latest quarter rose 7.1%, with FFO per share rising 2.1%.

The key to Realty Income's success lies with its ability to lease only to investment-grade retailers and to lease for the long-term. Of the 145 properties it acquired in the second quarter, 140 were leased to investment-grade companies, according to Realty Income's quarterly report. Of Realty Income's 136 tenants as of its recently ended quarter, 15 of them made up 48% of total leased properties, with many being financially fit companies. Dollar Tree, which accounts for 2.7%, and spirit maker Diageo at 5% are two such companies comprising a sizable portion of Realty Income's property-lease portfolio. The one questionable name I find on its list is Rite-Aid , which comprises 2.5% of all leases and is currently carrying about $6 billion in debt on its balance sheet.

As I previously mentioned, leasing for the long-term is another key component to Realty Income's success. With many contracts negotiated in some cases for multiple decades, its cash flow is more or less secure as long as rent rates don't fall through the floor or bankruptcies don't wreak complete havoc on its portfolio. Here's a quick glance at Realty Income's lease expiration schedule:

As you can see from the above charts, a good majority of Realty Income's leases expire in 10 or more years from now. In fact, 55.5% of all rental revenue is secure until at least 2023.

The same can't be said for its peers, National Retail Properties and Regency Centers . Regency, which has a strong presence in leasing to grocery stores, has a marginally lower occupancy rate at 94%, but leases 28 of its 364 properties to the troubled SUPERVALU . Large levels of debt and an ongoing turnaround that has failed to take hold have many investors questioning its long-term survival. Something similar can be said for National Retail Properties, which counts big-box retailer Best Buy and office supply store OfficeMax among its tenants. Both have made plans to close stores in the coming years.

A monthly stipend
With Realty Income really in a class among its own, and performing better than the Dow Jones Industrial Average, S&P 500, and Nasdaq Composite since its inception in 1994 on a compounded basis, the only thing left to discuss is why it's the queen of queens when it comes to dividend-paying REITs.

Sure, you can get a volatile double-digit yield from a highly levered mortgage-REIT, but it's very unlikely that you'll get consistent dividend growth to the tune that Realty Income offers. Whereas Diebold has boosted its dividend in 59 consecutive years, Realty Income has boosted its payout for 59 straight quarters! The company isn't going to show remarkably strong dividend growth as its payments can only grow as fast as rents can rise, but it's nonetheless a commitment from management to reward its long-term shareholders. 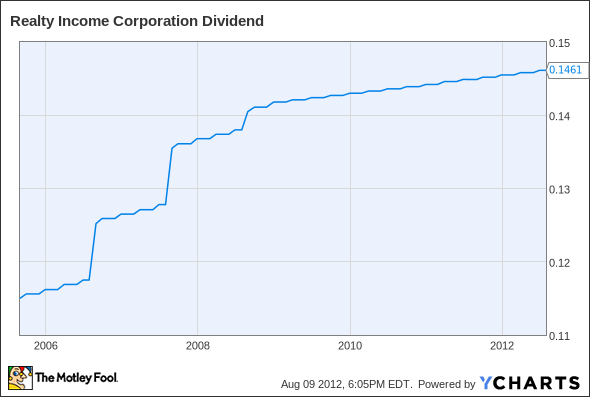 As you can see, it's been nothing but up, up, up for Realty Income. And the best part, which I haven't even touched on yet, is that the retail REIT pays its dividends out monthly!

Foolish roundup
That's two weeks in a row we've looked at what essentially are the premier dividend-raising names in the market. Realty Income has a steady stream of cash flow thanks to its long-term contracts, investment-grade tenants, and prudent use of leverage. A current yield of 4.3% implies a complete dividend payback (if the funds are reinvested) in just less than 17 years at these levels. Considering its historical market outperformance, even near its 52-week high here, I feel the company is a great dividend you can consider buying right now.

If you're craving even more dividend ideas, I invite you to download a copy of our special report, "Secure Your Future With 9 Rock-Solid Dividend Stocks," which is loaded with income-producing companies hand-selected by our top analysts. Best of all, this report is free, so don't miss out!