The payroll-processing giant is on the elite list of Dividend Aristocrats. Here's how it got there.

Investors have always been interested in stocks that pay dividends, but lately, low interest rates on bonds and other fixed-income investments have made solid dividend payers even more valuable. Among the most promising dividend stocks in the market is Automatic Data Processing (ADP -0.09%), and one big reason is that it is one of the few exclusive companies to make the list of Dividend Aristocrats. In order to become a member of this elite group, a company must have raised its dividend payouts to shareholders every single year for at least a quarter-century. Only a few dozen stocks manage to make the cut, and those that do tend to stay there for a long time.

ADP is a huge player in the payroll-processing and HR-services industry, with clients including some of the biggest corporations in the world. But with employment having been sluggish at best in recent years, how has ADP coped? Let's take a closer look at ADP to see whether it can sustain its long streak of rewarding dividend payouts to investors.

The latest news from ADP
A big part of ADP's success comes simply from its being in an industry where the costs of switching to rival providers typically outweigh any prospective benefits. For the most part, ADP and rival Paychex (PAYX 0.31%) have carved up the industry into two parts, with ADP having had success with many of the largest employers while Paychex tends to target the smaller and mid-sized employer market.

But recently, ADP and Paychex have seen a potential new competitor in the mix. Intuit (INTU -3.27%) has gotten its foot in the small-business door with its popular Quickbooks and TurboTax software, and the company sees plenty of opportunity in getting business customers who use its accounting and tax products to move their entire HR suite to Intuit. That arguably affects the smaller-focused Paychex more than ADP, but Intuit has a history of going after larger game once it consolidates its progress in a particular industry. 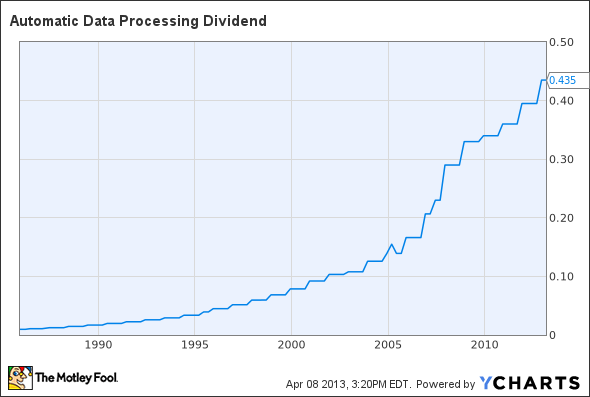 As you can see, ADP's dividend growth slowed slightly during the 2008 recession, as many companies that focused on serving business customers fell prey to the recession's impact. But since then, ADP has started to boost its dividend more sharply again, with its most recent increase amounting to more than a 10% gain.

When will dividends rise again?
Since ADP's most recent dividend increase was back in December, investors will likely have to wait six months or longer for another jump in the payouts they receive. But with strong leadership at ADP's helm and some signs of the economy growing again, ADP appears to be on an accelerating track to make dividend investors happy for years to come.

Click here to add ADP to My Watchlist, which can find all of our Foolish analysis on it and all your other stocks.

The 1 Stock You've Been Overlooking for Your IRA
These Stocks Just Raised Their Dividends
3 Dividend Stocks for Your Watchlist in 2014
These Top-15 CEOs Give You an Investing Edge
Are These Companies Preparing a Dividend Surprise?