Reynolds American (NYSE:RAI) faces a number of challenges. Health awareness and regulations have led to a steady decline in revenue in recent years. Significantly larger competitor Altria (NYSE:MO)uses its scale to drive higher profit margins of 26% than the 21% profit margin that Reynolds reported in 2013. With significant pressures limiting the company's ability to reverse the negative top line trend and lower margins, Reynolds is forced to find other ways to continue to deliver earnings growth.

Lorillard is the perfect match
This week, speculation that Reynolds is preparing a bid for Lorillard (NYSE:LO.DL) has sent the shares of both companies higher. While it makes sense that shares of Lorillard would pop following speculation that the company may be acquired for anywhere between $60 and $80 per share given that the company's shares closed February at $49.06, it may be less intuitive why shares of Reynolds also benefited from the news.

There are a few reasons for Reynolds' pop. First,  as noted in the following chart, Lorillard has managed to grow revenue over the same period that Reynolds has struggled with revenue declines. 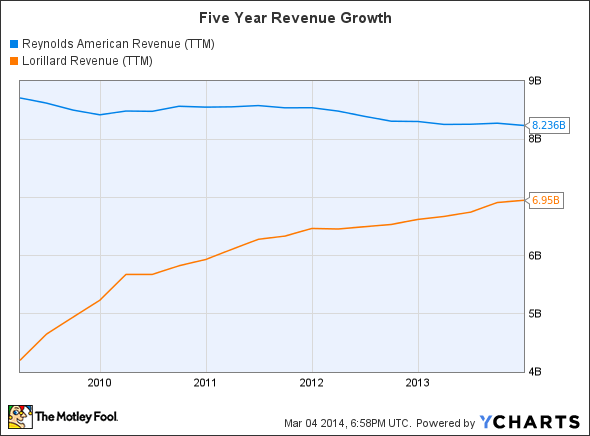 The combination of the number two and three tobacco sellers in the United States would provide much better scale to compete effectively with market leader Altria. This scale includes significant potential for cost savings and synergies generated from combining the management of the two companies. Estimates of potential annual synergies have been as high as $750 million for the combined company.

Growth, ownership of the leader in the rapidly growing electronic cigarette market, and significant cost savings are all reasons that Lorillard is a great fit for Reynolds.

Lorillard's valuation remains reasonable
Even after the recent pop in share price following speculation of a potential bid, shares of Lorillard remain reasonably valued compared to the competition:

Adding a reasonable valuation to an already compelling list of reasons for Reynolds to bid for Lorillard makes the decision an obvious one.

Not a done deal yet!
While it makes perfect sense for Reynolds to try to acquire Lorillard, this investment thesis is just the beginning of the process. Next, Reynolds needs to entice Lorillard's management and investors to agree to a transaction. Many deals fall apart when the two sides cannot agree on price, and such failed attempts often take a hostile turn as one side seeks to push through a deal. It is hard to predict the probability that a deal can be worked out, but it is certain that Reynolds will need to pay a premium in excess of the current valuation to acquire Lorillard.

Assuming the two sides can agree on terms, there are still significant regulatory hurdles.  The combination of the number two and three companies in any industry is always scrutinized by the government. Add in the complication of regulation specific to the tobacco industry and there is a very reasonable chance that the government would either deny such a combination or place conditions on the transaction that would be unacceptable to one or both parties.

As a result, the acquisition of Lorillard may make complete sense to Reynolds but fail to materialize for a number of reasons. Therefore, it is important to consider any investment in Lorillard based on the fundamentals of the current company rather than on the basis of speculation that a bid might be forthcoming, that the bid will be accepted, and that a deal will in fact close at some point in the future.