Where Annaly Capital Management (NYSE:NLY) and American Capital Agency's (NASDAQ:AGNC) massive dividend yield comes from is clear. In fact, in the two companies' most recent annual report they mention the phrase, "distribute 90% of taxable income to stockholders" more than a dozen times combined.

What's mentioned much less often, however, is what counts as "taxable income?"

Considering neither company guarantees a dividend, understanding what this accounting term means can help investors determine what's important watch, and ultimately, whether or not Annaly and American Capital Agency's dividend is sustainable.

To better understand the word itself, I'll break it down. Shown below is an example of a tax form from the Internal Revenue Service (IRS) that determines a REITs "income."

From there the two companies will take deductions.

Both companies invest mainly in agency securities guaranteed by Fannie Mae and Freddie Mac. For this reasons neither company will have much, if any, bad debt (line 12) – or loans that they believe will not be paid back.

On the other hand, since they depend on borrowed funds to make investments, interest expense (line 15) is arguably the most important deduction.

Take the difference between "income" and "deductions" and you have "taxable income." Of which 90%, or more, will be distributed to shareholders.

Net interest income
Because interest income and interest expense are two of the most important factors in determining taxable income, then the difference between the two -- which creates net interest income (NII) --  should have a significant impact on Annaly and American Capital Agency's ability to payout their dividend.

And that's exactly the case. As the two companies' NII rises, or falls, the size of the dividend roughly follows in stride. 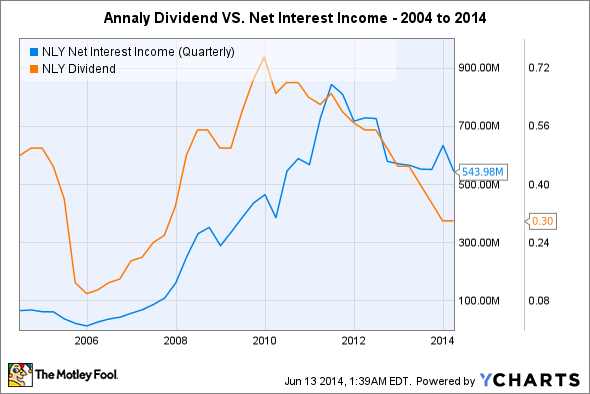 Both Annaly and American Capital Agency's NII is down more than 20% since 2012. Which, in the same time, has cut their dividend in half.

The environment
Since Annaly and American Capital Agency borrow based on short-term interest rates to fund longer-term investments, looking at the spread, or difference, between 10 and two-year U.S. Treasury bonds can help determine dividend stability. 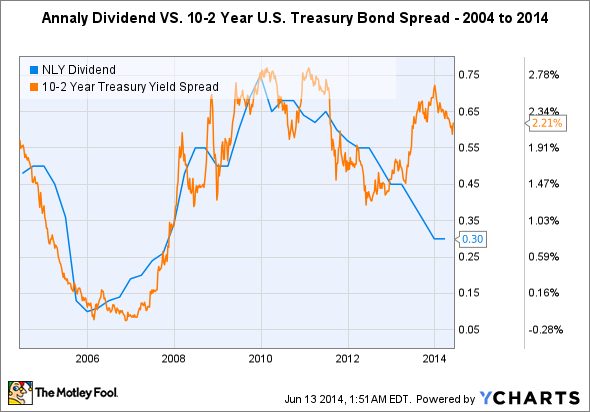 While only Annaly is shown, both companies' dividend follows the 10-2 year U.S. Treasury spread almost exactly -- but with one exception.

As spreads increased in mid-2013 both companies' dividend continued to trend downward. This has to do with the third useful measure for judging dividend sustainability.

Leverage and hedging
When there is the threat of short-term interest rates rising (as there has been recently) mREITs will often do two things.

Borrowing less compared to the company's equity, or using less leverage, protects against majors losses if rates rise and bond values fall. However, the trade-off is they can't buy as many securities which lowers NII.
Secondly, higher short-term rates leads to higher borrowing costs. So, to lock-in funding costs Annaly and American Capital Agency entered into derivative contracts. The trade-off here is it requires them to pay higher rates than they're currently paying, ultimately increasing interest expenses, and lowering NII.
Therefore, less borrowing and using more derivatives will often lead to lower dividends.

The million-dollar question
Over the past year both Annaly and American Capital Agency's net interest income has fallen, 10-2 year Treasury spreads are trending downward, and the Federal Reserve Bank -- which controls short-term interest rates -- has suggested it will raise rates sometime in 2015.

Ultimately, both companies' dividend is likely to face environmental pressures over the next few years. However, interest rate spreads (1-2 year Treasuries) are still well above financial crisis lows, and the actions Annaly and American Capital Agency have taken -- specifically, increasing the use of derivatives to protect borrowing costs -- should ensure the sustainability of their dividend.