Please ensure Javascript is enabled for purposes of website accessibility
Log In Help Join The Motley Fool
Free Article Join Over 1 Million Premium Members And Get More In-Depth Stock Guidance and Research
By John Maxfield - Jul 18, 2014 at 6:00AM

Even though this Fool has said he'd never buy Annaly Capital Management, there are three conditions under which he would.

I'm far from Annaly Capital Management's (NLY -0.15%) biggest fan. In fact, I suspect I'm one of its most vocal critics.

But that doesn't mean I'd never buy its stock. Sure, I've said I never would. I've even listed nine specific reasons investors should avoid it.

However, if the following highly improbable things were to happen, I'd have to think long and hard about eating my own words.

1. Management would have to be internalized
First and foremost, Annaly would need to bring its management team back in-house.

If you'll recall, in the middle of last year, the high-yielding mortgage REIT succumbed to years of criticism over its exorbitant and absurdly structured executive compensation packages.

Granted, the pressure didn't stop the offensive practice. Instead, Annaly's executives buried the issue by outsourcing its management to a private company -- which, not coincidentally, is wholly owned by the very same executives.

Annaly is now one of only a handful of publicly traded companies that don't tell their shareholders (i.e., the company's owners) how, and how much, the executives get paid.

To me, this is an affront to transparency and integrity, and this is particularly the case given that Annaly's board of directors claims to be "committed to corporate governance best practices and recognizes the significant interest of stockholders in executive compensation matters."

2. Its current group of executives would have to be fired
I trust it's obvious that I view the foregoing as problematic. But to make matters worse, this isn't Annaly's executives' only transgression.

Equally disturbing is their habit of hiring relatives and then paying them seven-figure salaries -- nepotism, that is.

In one case, the sister of Annaly's current CEO and the son of a board member were hired to be the CFO and CEO, respectively, of Chimera Investment Corporation (CIM 0.32%), one of Annaly's publicly traded portfolio companies.

What, perchance, happened to Chimera? Over the past two years, it's been embroiled in an accounting fiasco that dates all the way back to its initial public offering in 2007.

I won't belabor you with the gory details, as I've discussed them extensively elsewhere, but rest assured they're highly suggestive of egregious incompetence.

3. Its stock would have to be cheap -- really cheap
According to the age-old adage, there's a price for everything.

What would that price be for Annaly? Assuming the former issues were addressed, I'd be willing to buy it for a large discount to book value.

That sounds extreme, I'm aware. But there are two things to keep in mind.

The first is that this isn't wholly unprecedented. In the latter half of 1998, it frequently traded below 0.7 times book value. And even recently, it's dipped below 0.8 times book. 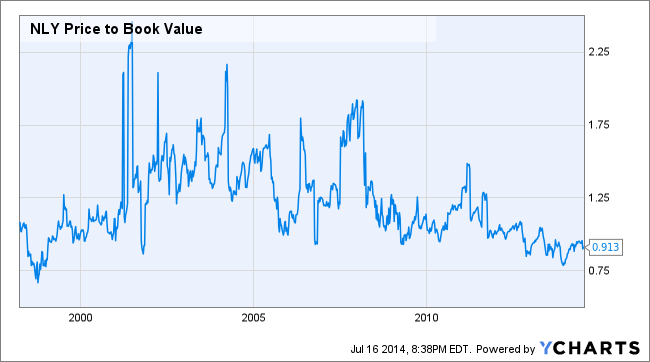 The second thing to keep in mind, in turn, is that the future doesn't appear bright for mortgage REITs.

Over the next decade and probably for much longer, it's hard to image that interest rates won't trend higher. I say this because there's really no other direction for them to go.

This is a problem for Annaly, and the entire industry for that matter, because the value of agency mortgage-backed securities (which make up the lion's share of Annaly's portfolio) is inversely related to interest rates; as the latter heads up, the former goes down.

Suffice it to say, this is inauspicious for anyone hoping Annaly will outperform the broader market without a significant discount from the outset.

Still not buying?
In sum, let me be clear. I am under no illusion that any of these things will happen anytime soon -- or ever, quite frankly.

Consequently, it continues to be my firm belief that Annaly's stock should be avoided by all but the least risk-averse investors.

John Maxfield and The Motley Fool have no position in any of the stocks mentioned. Try any of our Foolish newsletter services free for 30 days. We Fools don't all hold the same opinions, but we all believe that considering a diverse range of insights makes us better investors. The Motley Fool has a disclosure policy.