Mike Fee
(mikefee)
Author Bio
Mike Fee is originally from St. Paul, MN and has been working and attending Webster University in Bangkok, Thailand. He has been a Fool since 2009. You can follow Mike on Twitter at @mfee02

Realty Income Corp. (NYSE:O) is a REIT that has paid investors monthly dividends since 1970. It is consistent, conservative, and dependable. The company launched its IPO in 1994, but its origins began much earlier through a unique deal with Taco Bell.

Meet the Clarks
In 1969, Bill and Joan Clark wanted to start a real estate company. They had a unique strategy: Find a tenants that had a good reputation and steady free cash flow every month, but lacked the large amount of capital required to buy real estate to expand. Once a tenant with this profile was found, the Clarks would sit down and negotiate with them. If the tenant was willing to commit to a long-term lease agreement, The Clarks would buy the commercial real estate the tenant needed and lease it back, and the monthly rent would be collected and distributed to shareholders.

Thus, the "sale-leaseback" method was born. While the Clarks might not have been the first company to implement this strategy, they perfected the model and built one of the largest publicly traded REITs in the world. 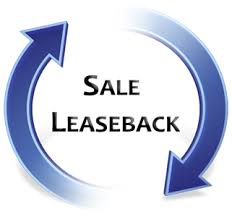 Taco Bell origins
Taco Bell has more than 6,500 locations nationwide today, but back in the 1960s, it was a small taco chain that was strapped for cash. To grow meant to invest a lot of its capital toward real estate. In 1969, founder Glen Bell met with the Clarks and negotiated its first sale-leaseback deal. The terms? They would provide Taco Bell the commercial retail real estate it needed to expand in exchange for a 20-year lease agreement. Both parties agreed and Taco Bell could begin focusing on expanding its restaurant footprint without worrying about spending a good amount of its capital on real estate.

The strategy worked. By 1970, Taco Bell had 325 locations and went public. PepsiCo bought the company in 1978 and eventually it became a part of Yum Brands. Today, Realty Income still has a several Taco Bell locations in its portfolio.

Retail is the core focus of the company. The Clarks convinced other retailers to adopt the sale-leaseback method and the company began building a diverse portfolio of properties. It began as a regional strategy, and eventually grew nationwide. By 1994, the number of properties in its portfolio ballooned to 630. But the company believed it could grow more. However, it needed a lot more cash in order to accomplish this goal, so management decided going public was the best option at the time.

Only 3 CEOs in 45 years
In the company's 45-year history, it has only had three CEOs. Its founder, William Clark, led the company from 1969 until 1997. However, Clark still had an active role as the Chairman of the company until he retired in 2009.  Following his reign, Tom Lewis stepped in.

Despite a succession in leadership, there was little change in management's vision and principals. Mr. Lewis outlined the company's goals every year, providing investors clarity in what the company was all about. In 2008, he was a finalist for Morningstar's CEO of the Year, losing only to Warren Buffett.

In 2013, Lewis announced he was retiring, and John Case became the new CEO. Bringing decades of real estate experience with him, investors can be assured that the company is in good hands today.

The formula still remains the same: negotiate sale-leaseback deals via long-term lease agreements, generating reliable cash flow through monthly rents. The rents will be collected and distributed monthly to shareholders. Despite its rapid growth over the decades, the company will continue to make strategic acquisitions in the future.

The best days lie ahead for "The Monthly Dividend Company."