This little-known industrial company has been a huge boon to dividend investors. Find out more about it.

Some of the best-known stocks in the market are also great at paying dividends. But to find some of the strongest dividend investments, sometimes you have to look beyond the headlines. Illinois Tool Works (ITW 4.59%) is a great example, as the company has found diverse profit opportunities in several different divisions that have helped it produce a 40-year track record of raising its dividends every year. Indeed, that streak puts Illinois Tool Works among the elite list of Dividend Aristocrats, all of which need at least a quarter-century of annual dividend hikes to qualify.

Illinois Tool Works makes components and other products for everything from food equipment and automotive applications to welding, construction products, and testing and measurement equipment. Yet some of those segments have produced more growth lately than others. Below, we'll take a closer look at Illinois Tool Works.

The company has been doing a good job of making the most of its revenue, with its attention to boosting its margins producing some impressive results. In its second-quarter earnings report, Illinois Tool Works reported record operating margins that climbed 3 full percentage points to 20.5%, highlighting the success of initiatives designed to enhance productivity and operating efficiency. As a result, the company raised its earnings guidance for the full year.

Yet Illinois Tool Works hasn't gotten equal contributions from all of its segments. The automotive and food-equipment sectors have been booming, with automotive in particular contributing the bulk of the company's organic growth. By contrast, areas like welding and its polymers and fluids division have struggled to keep their sales from falling, and overall, revenue growth of just 3.5% has required Illinois Tool Works to squeeze as much profit as possible from each dollar of sales in order to keep growing.

From a dividend standpoint, though, Illinois Tool Works hasn't hesitated to treat shareholders well. In August, the company declared a 15% increase in its dividend. The company claims a track record of more than half a century of annual dividend increases, with the exception of a period in the early 1970s during which government controls constrained its ability to do so. 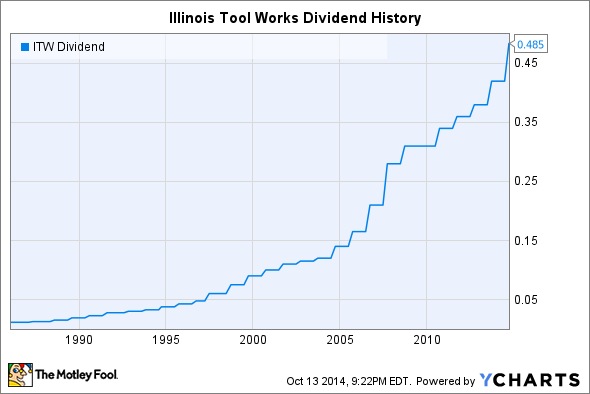 Even the strongest of companies isn't immune to adverse trends, and Illinois Tool Works is no exception. Given the substantial portion of its business the company gets from the automotive segment, any reversal in growth trends could prove problematic to its future growth prospects. Overseas, reports of a slowdown in China's auto market could have a negative impact on its automotive OEM business, and even though the U.S. market has remained stronger, some signs of a potential top could signify a high-water mark for Illinois Tool Works domestically as well.

In addition, as helpful as efficiency initiatives are for producing growth during tough times, there's a limit to how much Illinois Tool Works can rely on further gains in the future. With profit margins in the broader market having seen vast improvement in recent years, many worry that the only direction margins can move in the future is down. That doesn't necessarily translate on a company-by-company basis, but Illinois Tool Works nevertheless needs to focus on growing sales as well as raising margins if it truly wants to get larger.

The next step for Illinois Tool Works' dividend

Perhaps the best sign for dividend investors is that Illinois Tool Works currently pays out only a small portion of its overall earnings in the form of dividends. With such a low payout ratio, even periods of stagnant growth could nevertheless allow the company to keep raising its dividend payments, giving long-term investors the confidence to stick with the company for the long haul.

Dan Caplinger has no position in any stocks mentioned. The Motley Fool recommends Illinois Tool Works. We Fools may not all hold the same opinions, but we all believe that considering a diverse range of insights makes us better investors. The Motley Fool has a disclosure policy.

2 Safe Dividend Stocks That Wall Street Is Sleeping On
420%