On Wednesday, the Federal Open Market Committee, FOMC, released a statement that was filled with words and numbers. This was followed by a speech from the chair of the Federal Reserve, Janet Yellen, who said words.

Some of those words and numbers hold great importance to companies like Annaly Capital Management (NYSE:NLY) and American Capital Agency (NASDAQ:AGNC), however, most were muddled and purposely evasive.

To sort out the noise, I collected the three most important takeaways for mortgage REIT investors.

Following the financial crisis in 2008, the Federal Reserve dropped the federal funds rate -- the rate it costs banks to borrow overnight -- to near zero. Because the interest rate Annaly and American Capital Agency pay on their borrowings is closely tied to the federal funds rate, the low-cost funding they received was a godsend.

However, over the past six years the economy has improved and this has shifted the conversation toward when the Fed will increase rates?

According to Chair Yellen, "[S]ome believe the middle of next year." Considering 15 of the 17 FOMC participants projected a rate increase in 2015 -- and "some" isn't most -- my assumption is that the committee is leaning toward late 2015.

With that said, both the FOMC's statement and Chair Yellen's remarks left plenty of wiggle room to increase the federal funds rate sooner or later depending on progress or lack of progress toward their goals of maximum employment and 2% inflation.

2. How fast will rates increase? 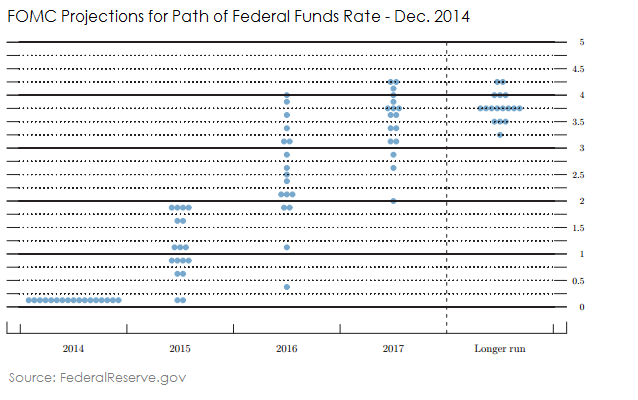 This approach is very similar to the timing of rate increases the Federal Reserve used in 2004. Unfortunately for Annaly, this did not work out particularly well as their dividend was cut in half -- American Capital Agency didn't go public until 2008. 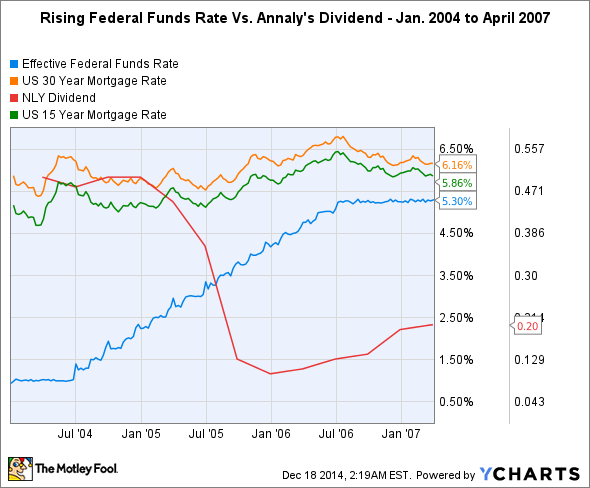 Much of the reason Annaly's dividend fell and stayed low between 2005 and early 2007 was because of a tightening spread -- difference between borrowing costs and asset yields. As you can see in the chart above, the federal funds rate increased more than four percentage points while the interest rate on 30-year and 15-year mortgages -- Annaly and American Capital Agency's chief asset classes -- increased only slightly.

Ultimately, when the gap between the federal funds rate and mortgage rate narrows, things have gotten dicey for Annaly in the past. The question is: What's going on with mortgage rates today?

1. The Fed's giant balance sheet
Currently, the Federal Reserve is holding $1.7 Trillion worth of mortgage-backed securities, MBSes -- pools of residential mortgages. While the Fed is done adding additional money to this pile, they will continue to rollover the interest and principal into new MBSes for a "considerable time."

In essence, through buying up large quantities of these bonds the Fed has helped to drive down the interest rate on mortgages. 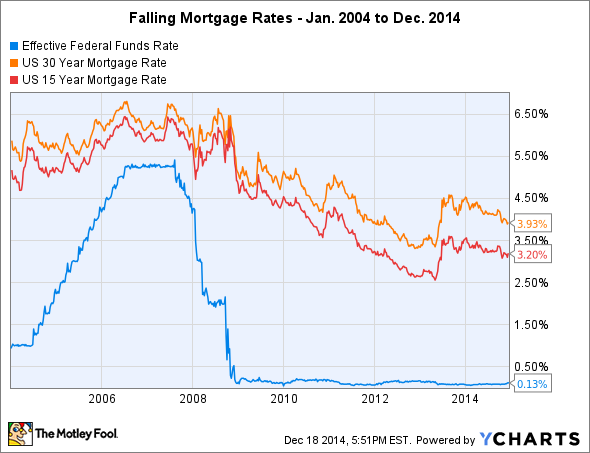 Although lower mortgages rates are fantastic for homeowners and potential homeowners -- which is the Fed's intention -- if mortgage rates stay down and the federal funds rate goes up, Annaly and American Capital Agency will see the same pressures that lead to Annaly cutting its dividend to the lowest rate in company history.

Also, remember that that both companies borrowing costs will fluctuate with the federal funds rate, but it does not represent their actual cost of funds. As of the third quarter, Annaly's cost of funds was 1.6% and American Capital Agency's was 1.4%. With mortgage rates between three and four percent this gives an idea of how tight spreads are already.

Is it time to sell?
Most of what I just said creates a pretty bleak picture for Annaly and American Capital Agency's near-term future.

With that said, while I believe the impact of an increasing federal funds rates is important to understand, I think this is a short-term issue and not a long-term problem. So, for long-term investors, this is something to be aware of, but not a reason to sell.