If a dividend yield above 11% is not enough to get you interested, mortgage real estate investment trusts, or mREITs, Annaly Capital Management (NYSE:NLY), American Capital Agency (NASDAQ:AGNC), and Armour Residential REIT (NYSE:ARR) are all trading at significant discounts to their book value. So they're cheap too. 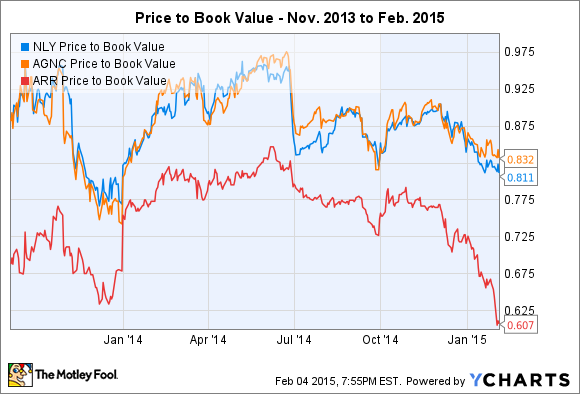 Since mREITs are essentially portfolios of bonds -- or, more specifically, residential mortgage-backed securities -- gauging the value of their net assets (assets minus liabilities) is particularly useful. Annaly and American Capital Agency's price-to-book value of 0.8 means their net assets, or book value, are trading at $0.80 on the dollar. Armour is even more dramatic at $0.60 on the dollar.

However, whether this makes them cheap or pricey is more opinion than fact. And you'd be right to be suspicious as to why these stocks are trading at such a discount.

The market is always looking forward, so that fact that Annaly, Armour, and American Capital Agency are trading below their book value suggests investors expect the companies to underperform. While there are several reasons why this is could be the case, one of the most apparent is tighter spreads. 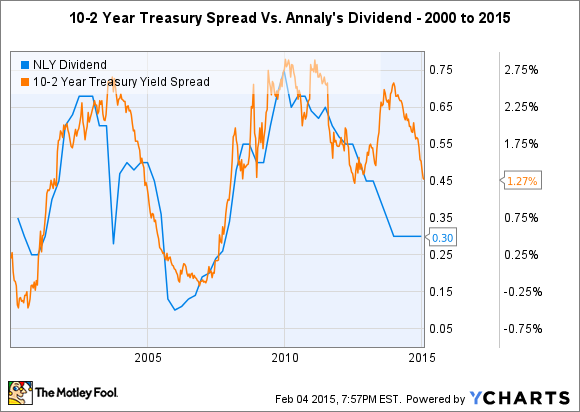 mREITs borrow based on short-term interest rates and then buy longer-term assets, earning the difference, or spread, between the two. This will often follow the spread between 10- and two-year Treasury bonds. As shown in the chart above, when spreads are tight, as they were in 2006, Annaly's earnings suffer and its dividend plummets. Conversely, when spreads widen, as in 2010, Annaly's earnings and dividend are much stronger. The same can be said for the other two companies.

Over the past year, spreads have tightened. If this continues, we could expect weaker earnings and potential dividend cuts, which ultimately make the companies less valuable.

Why they are still a good buy
While these companies are cheap for a reason, it is not necessarily always a good reason.

If you take a second look at the chart above, you'll notice spreads have widened and narrowed over time. Looking forward, this should continue because bond prices, by their nature, rise and fall over time. The difficulty, however, is predicting when that will occur.

See, even experts can get it wrong. That is why the best recipe for success is to understand that while each mREIT's performance will fluctuate with spreads over time, a well-managed company will provide more upside than downside in the long term. Moreover, picking these companies up when the market is more pessimistic can only help your cause.

Which is the best?
Return on equity is one of the best ways to judge how efficiently management creates earnings. Following this measure over time can offer a feel for which company has best managed differing environments.

However, instead of using the traditional measure (net income divided by shareholders' equity), I'll replace net income with comprehensive income. This is because, as investment companies, much of these companies' earnings can come in unrealized gains or losses that are not included in net income. 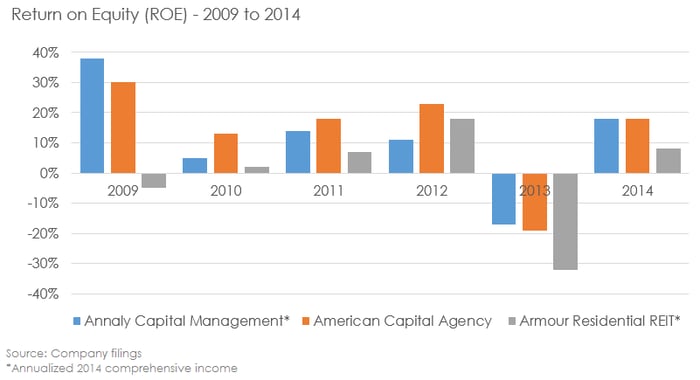 Armour's extremely low valuation makes a lot more sense after looking at its results. The company underperformed Annaly in five of the last six years and underperformed American Capital Agency in all six years.

I want a company that is trading at a discount and has a management team with a proven track record of generating results. By pouncing on opportunity in years like 2009 and 2011, as well as limiting damages in a volatile environment such as 2013, Annaly and American Capital Agency best fit the bill. Although the road ahead looks bumpy, I believe over the long term they will perform well, and are two of the best high-yield investments you can buy today.