At first glance, fourth-quarter and full-year results for Annaly Capital Management (NYSE:NLY) didn’t look so great. After the market closed on Tuesday, the company reported a net income loss of $0.71 per share for the quarter, compared with consensus estimates of $0.31 from Zacks Investment Research. For the year, Annaly reported a net loss of $0.96 per share.

But don't be too quick to judge. Annaly is a mortgage REIT, and net income doesn’t always give an accurate glimpse into what actually happened during the quarter.

A closer look at earnings
The company suggested that the net income loss for the quarter "was primarily attributable to mark-to-market losses on our interest-rate swaps." In fact, Annaly took a whopping $873 million in unrealized losses on its interest-rate swaps -- derivatives used to protect the company's borrowing costs from rising interest rates.

As an investment company, however, Annaly will often take significant unrealized gains and losses on its mortgage securities, actions that aren’t included in net income. Comprehensive income is thus often a better indicator of the company's performance. That was certainly the case in the fourth quarter, as Annaly took $1.2 billion in unrealized gains on its securities, which more than offset the losses.

Comprehensive income was $514 million for the quarter, boosting book value per share by 1.8% compared with the third quarter of 2014.

Getting to the core
While comprehensive income can help us see the big picture, by removing one-time charges and non-recurring gains and losses, core earnings help us zoom in on the company's core operations.

Annaly's core earnings were $0.30 per share for the quarter and $1.14 for 2014. This is a non-GAAP measure, and how it’s calculated will vary from company to company -- so take it for what it's worth, but I find it a useful measure for judging dividend stability. For instance, core earnings for 2013 totaled $1.21 per share, and Annaly's dividend payout was $1.50. Year over year, core earnings are down and, unsurprisingly, so is the dividend payout, which totaled $1.20 in 2014.

What’s driving lower core earnings?
Annaly earns the spread, or difference, between what it cost to borrow and the yield on its assets. Historically, the larger the spread, the better Annaly's returns, and the bigger their dividend tends to be. Over the past year, however, spreads have tightened dramatically.

Annaly's spread tends to follow the difference between the 10- and two-year Treasury rate. The gap between Treasury rates has narrowed significantly, ultimately making things much more difficult for Annaly. 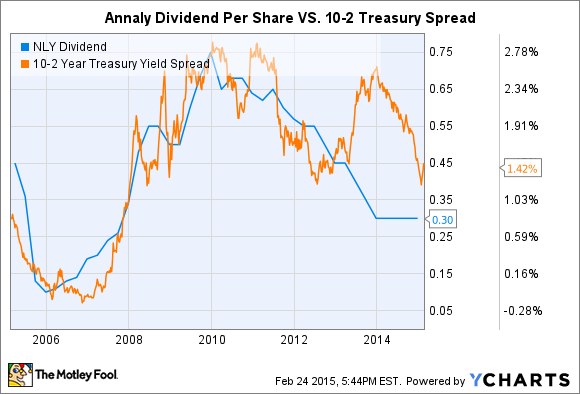 Looking forward
Overall, I think shareholders should be pleased with Annaly's 2014 performance, especially considering that the conventional wisdom assumed interest rates would rise in 2014 and that Annaly would get hammered. Annaly CEO Wellington Denahan disagreed with this notion, and she was right. Interests rate fell, and Annaly had a solid year.

And here we are again. Today's conventional wisdom is calling for rising interest rates in 2015, but this time Denahan isn't fighting the tide:

We fully expect the Federal Reserve to adjust policy accommodation sometime this year and the markets to endure higher levels of volatility. We look forward to the opportunities that will accompany that adjustment and remain comfortable in our continued ability to deliver attractive relative returns.

By "adjust policy accommodation," Denahan means "increase interest rates," which suggests that the upcoming environment will be a difficult one for Annaly and the mortgage REIT industry.

With that said, I'm a firm believer in the market cycle. I think interest rates will rise and fall and spreads will widen and narrow, and Annaly will see more than its fair share of opportunities over time. So while I see Annaly as solid a long-term investment, because of the difficult environment ahead, I think Annaly is a hold right now.