A look at a dynamic long-term strategy that is based on proven principals.

I haven't heard anyone on CNBC talking about it, but a relatively new exchange-traded fund beat the return of the S&P 500 over the last year. This investment gets little to no attention from mainstream financial media. This fund doesn't take complicated risks like a hedge fund would. By following a few simple principles that would make Warren Buffet proud, it holds the best shareholder-friendly stocks, leading to impressive returns.

This recent outperformance was no fluke, and it didn't happen because of a special one-time opportunity in a high-growth area. This simple strategy has a long-term track record of market-beating returns. According to Jim O'Shaughnessy's book What Works On Wall Street, this strategy would have turned $10,000 into nearly $1.8 billion from 1928 through 2009. I expect it to outperform the overall market for decades to come, as it was one of the top-performing strategies out of hundreds Jim looked at. It's an ideal investment for the beginning Fool to put to work today, because the fund I mentioned offers a "one click" way to participate in the strategy. 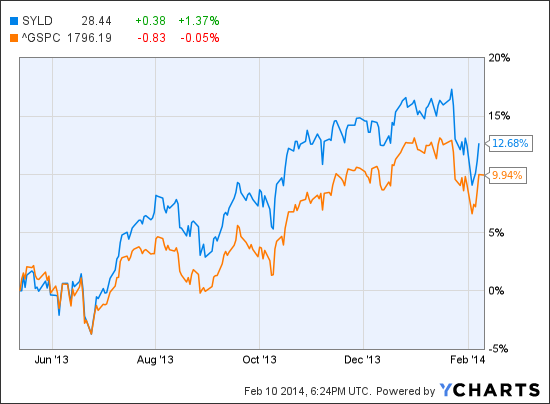 The concept of shareholder yield
Mebane Faber, co-founder and CIO of Cambria Investments, recently published an e-book on the idea of shareholder yield. Faber's idea was to find a simple method to identify the world's most shareholder-friendly businesses -- companies that consistently return cash to shareholders.

Shareholder yield is defined as the sum of three factors: dividend yield, net share buybacks (buybacks minus new stock issuance), and net debt pay-down. Faber systematically covers each of these three factors and presents evidence that each factor individually contributes to the portfolio's outperformance. He concludes with data showing that the combination of all three factors outperforms each of the three individually -- as with my all-time favorite band, The Beatles, the whole is greater than the sum of its parts.

Based on Faber's findings, buying companies that return the most cash to investors results in market-beating returns. Since 1982, you could have earned an average of 15% per year with this strategy, compared to just an annualized 11% return on the S&P 500. Over 30 years, that leads to nearly three times the gains of simply owning the broader stock market.

That's an impressive result, but it doesn't end there. Next, using the "trend is your friend" principal, he includes stocks that are in an uptrend. This increased a 15% annual gain to 16.8%. Lest you think that's a marginal difference, that simple 1.8% increase nearly doubles your return over 30 years.

With these amazing results in hand, Faber launched the Cambria Shareholder Yield Fund to put his theory to work -- and it's off to a stellar start. It's the kind of fund that you want to buy and hold today and forget about for the next 30 years.

Recently, he launched a fund that primarily invests in European stocks: the Cambria Foreign Shareholder Yield Fund (FYLD). The fund's P/E ratio is around 12, which is lower than the corresponding U.S. market, which is valued around 15 times earnings. Moreover, the average dividend yield of the holdings is around 5% -- double that of U.S. stock dividends. And of course, these companies are also buying back shares -- part of Mebane's shareholder yield strategy. I believe the recent weakness in emerging markets and Europe presents an excellent opportunity to put some money to work in the foreign sector via this fund.