Ankush Shaw
(AnkushShaw)
Author Bio
As an analyst and financial writer, assisting the readers in taking more educated investment decisions based on first hand analysis is my primary objective.

Income investing has proved to be quite a challenge lately. Thanks to the loose monetary policy of the Federal Reserve, the benchmark interest rates had been at record low levels for the better part of fiscal year 2013, continuing the trend of the previous year.

Now that the stimulus is set to be scaled back by $20 billion, interest rates have started to inch upward. This hasn't caused the sort of stock market mayhem that many experts had predicted. However, the possibility of a market downturn going forward cannot be ruled out by any means.

Dividend ETF: A reliable option during downturns
Given this possibility, one of the most appealing equity investment strategies is dividend income investing. Dividend-paying stocks are usually less volatile than the broader markets and usually take less of a beating during a market downturn. Take, for example, the Vanguard Dividend Appreciation ETF (NYSEMKT:VIG) and the SPDR S&P 500 ETF (NYSEMKT:SPY), which serves as a proxy for the broad U.S. stock market.

In both sell-offs, the dividend ETF outperformed its broad-market counterpart.

Strategy in focus
This ETF contains only companies from the technology sector that have paid regular dividends over the trailing 12 months without reducing them over that time period. Further, the fund's holdings must yield at least 0.5%.

Another impressive characteristic of the ETF is that it imposes certain caps on individual holdings in order to mitigate the concentration risk within its top holdings. This is vital, as it somewhat reduces the risk factor of the growth-oriented and volatile tech sector.

When technology meets dividends
The technology sector has always been known as a growth-oriented sector. Tech companies tend to reinvest their earnings into the business, rather than paying regular cash dividends. However, lately we've seen a variety of major technology firms such as Apple and Yahoo! returning cash to their shareholders in the form of share repurchases and dividends. Apple recently announced its massive share buyback and dividend plan for the future.

The huge cash balances of these tech companies suggest that this shareholder-friendly trend will continue going forward.

An overlooked ETF
The First Trust NASDAQ Technology Dividend ETF has been largely overlooked by investors; it has only amassed an asset base of $296 million since its inception in August 2012. Further, the ETF has a low average daily trading volume of about 116,000 shares.

The ETF has lagged behind the broad market over the past year. However, this was not entirely unexpected, as dividend-focused ETFs usually underperform the broader markets during a bullish phase like the one we saw in 2013. 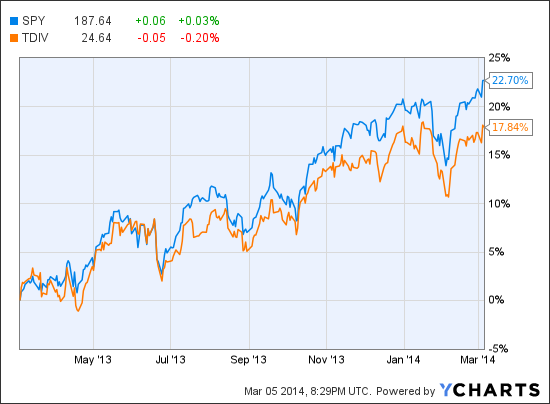 The bottom line
Although the performance of the broader market was nothing short of spectacular last year, the possibility of impending weakness is high this year. Investors could seek solace in dividend-paying investments not only to reduce their overall exposure to volatility, but also to earn those extra bits of income. Considering this, the First Trust NASDAQ Technology Dividend ETF could witness larger interest among investors and prove to be a lucrative option.