When most investors think about emerging markets, the first country they think of is China. Yet despite having a slightly smaller population, India has a lot of advantages over its larger rival from an investment standpoint. Some analysts believe that India's growth prospects are favorable compared to China, with the subcontinent poised to become the fastest-growing economy in the world in just the next few years.

It can be hard to get access to Indian stocks, especially because only a limited number of companies offer their shares on U.S. exchanges. Yet for those who still want to get diversified exposure to India, pooled investments like exchange-traded funds (ETFs) and closed-end funds can be a smart, cost-effective way to tap into the potential that the emerging market offers. Below, we'll look more closely at iShares India 50 (NASDAQ:INDY), WisdomTree India Earnings (NYSEMKT:EPI), and India Fund (NYSE:IFN) to see which one fits best with your needs.

A traditional approach to India

If you want typical vanilla ETF exposure to India, then the iShares India 50 ETF is a great way to get it. The ETF tracks an index of 50 of the largest companies in India, known colloquially as the Nifty 50.

The top stocks in the emerging-market nation span across many different industries. About a quarter of the fund's assets are invested in financial companies, with software, energy, and consumer finance each carrying allocations of between 8% and 11% within the fund. Additional holdings bring even more diversification, featuring exposure to automakers, tobacco companies, pharmaceutical stocks, and companies in the construction and materials business. A 0.93% expense ratio isn't exactly cheap, but you won't find many inexpensive ways to get one-stop investment exposure to India. 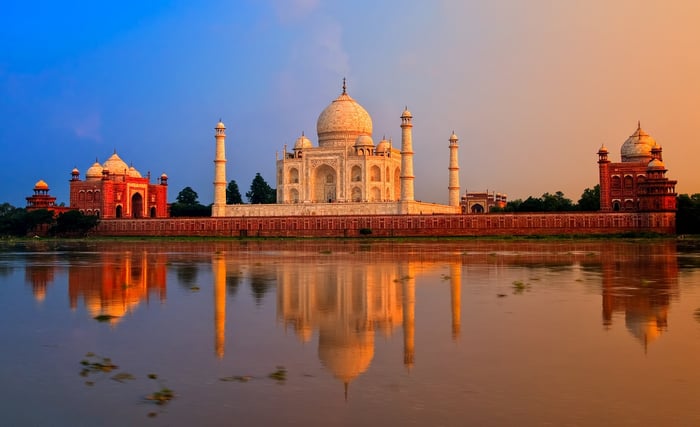 Tapping into the fundamentals

WisdomTree prides itself on offering alternatives to traditional market capitalization-weighted ETFs, and its India offering is no exception. WisdomTree India Earnings aims to hold Indian companies of all sizes. Unlike most ETFs, India Earnings takes the earnings that its components bring in and weights stocks accordingly. About two-thirds of the fund is invested in large-cap stocks, but the remainder includes roughly 25% exposure to mid-caps and nearly 10% small-cap holdings.

The WisdomTree ETFs methodology puts the emphasis on immediate profitability, and that gives the fund more of a bias toward current moneymakers in the Indian economy. Energy, banks, and software companies have roughly equal weights and combine to make up more than half the fund's assets, while materials, autos, and healthcare stocks play a lesser role. Of some concern is the fact that the fund has underperformed the index it's designed to track by a considerable margin of about 1.5 percentage points annually since its 2008 inception. Yet for those looking for a different type of exposure, the WisdomTree ETF offers a viable alternative.

Finally, India Fund is one of the oldest players in India. Set up as a closed-end fund, India Fund has different characteristics than ETFs, most particularly in the fact that it can trade at substantial premiums or discounts to its net asset value. Currently, shares are valued more than 10% below the net asset value of the fund's holdings, suggesting an overall lack of investor interest and a potential bargain opportunity.

Consumer goods companies play a much larger role in the India Fund compared to its ETF counterparts, but you'll also find sizable exposure to industrials, financial stocks, technology, and healthcare. Management fees are above average here, but the fund is actively managed and can move between stocks as circumstances warrant changes in overall strategy.

It's easy for U.S. investors to stay close to home with their portfolios. But India has made considerable progress in recent years, and conditions for investors look favorable for its immediate future as well. These three funds can give you easy access to the Indian market and let you share in any gains that India delivers in the years to come.