As a Foolish investor, you know why diversification is important for your portfolio. One of the best ways to diversify is to buy stocks in international markets that are growing rapidly. Or, simply, buy Indian stocks.

There's a reason Amazon.com (NASDAQ:AMZN) is pumping billions of dollars into India and even believes this could just be the beginning. Recently, CEO Jeff Bezos claimed that Amazon.in is the "most visited and fastest-growing marketplace in India." In 2017 alone, Amazon India's seller base grew a whopping 80%, according to the Press Trust of India.

An Economic Affairs Officer at the United Nations believes that India has the potential to grow at 8% "not for a few years, but 20 years." Officially, the United Nations projects the Indian economy to grow at 7.2% and 7.4% in 2018 and 2019, respectively. At that rate, India will overtake China to become the fastest-growing economy in the world, yet again. India held the crown until demonetization (a sudden pullout of 80% of currency in circulation) and tax reforms slowed the economy down in 2017. It was a short-term blip, and the economy is already bouncing back. If you aren't buying Indian stocks already, you could be missing something big. 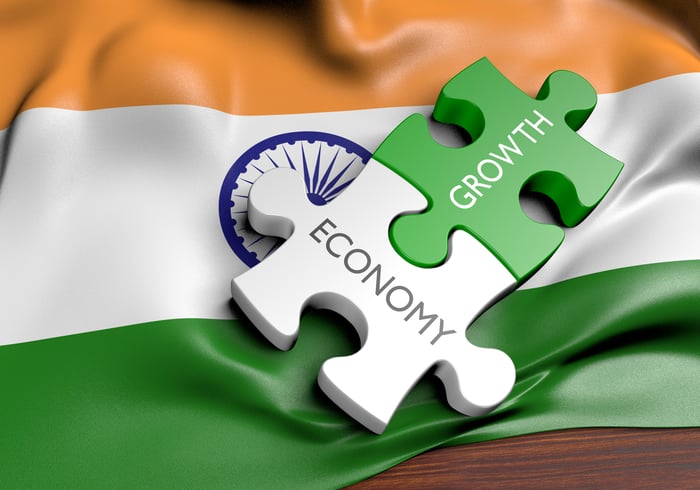 Stocks like Amazon, however, make for great, but perhaps not the best, bets on India's booming economy, as they aren't pure India plays. To make money off India's growth story, you need Indian stocks that can grow as the economy expands. Several Indian stocks are listed on the U.S. stock exchanges as American depositary shares, giving you the perfect investment opportunity. Some of the major Indian stocks currently listed on the NYSE and Nasdaq include:

Aside from stocks, there are also India-focused exchange-traded funds that offer you exposure to a basket of Indian stocks for low costs. Some of the largest India-focused ETFs are iShares MSCI India ETF (NYSEMKT: INDA), Wisdom Tree India Earnings Fund (NYSEMKT: EPI), and iShares S&P India Nifty 50 (NASDAQ:INDY).

Among all these investment options, the following are my top three Indian stock picks that you may want to consider investing in right now.

HDFC Bank: Leading from the front

HDFC Bank has doubled its net profit in just the past five years, and it's well funded, too. It ended the last quarter with a capital adequacy ratio of 15.1%, against the 10.25% required under the Basel III regulations. 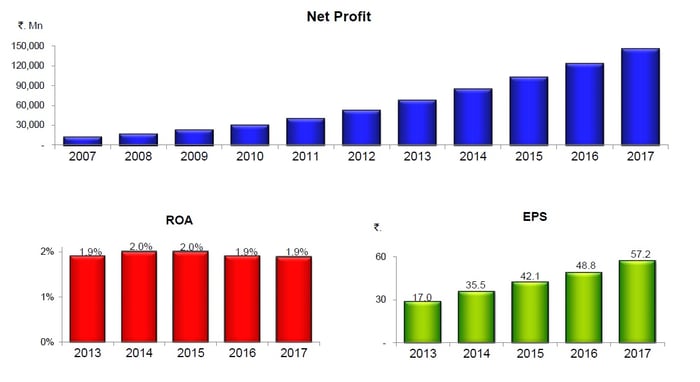 Thanks to its foothold in the Indian banking sector, HDFC Bank is incredibly well poised to benefit from India's ongoing cashless and digital drives. Between Sept. 30, 2016, and Sept. 30, 2017, the bank opened 181 new branches and set up 243 ATMs, expanding its reach to 2,669 cities and towns. That makes HDFC Bank's one of the most extensive banking networks in the country.

One major reason I like HDFC Bank is that it's part of the HDFC Group that owns companies covering nearly every aspect of financial services. That includes India's leading housing finance company, among the top three asset management companies (mutual funds), and one of the largest life and general insurance companies. So for a customer, HDFC Bank acts as a one-stop shop for all financial needs, which is a huge competitive advantage to have especially at a time when the Indian government is going all out to bank the "unbanked" population and boost financial inclusion.

In short, HDFC Bank is one of the best stocks to own in India today.

Tata Motors: A great turnaround story in the making

If you haven't heard about Tata Motors, does Jaguar Land Rover (JLR) ring a bell? JLR, the U.K.'s leading car manufacturer, is a Tata Motors subsidiary. Back in India, Tata Motors is the largest automobile company, with a portfolio covering cars, utility vehicles, trucks, buses, and defense vehicles. The company owns 76 subsidiaries in India and internationally and sells its products in 50 countries today.

Tata Motors had a bumpy 2017, partly because of weak end-market sentiments, a major management churn, and delays in new product launches. As a result, the stock ended 2017 on a flat note. The worst, however, could be behind it, as the auto giant is striving to make up for lost opportunities.

For instance, one important area where Tata Motors failed to make a mark in India was passenger cars. To play catch-up, it launched three aggressively priced cars in 2017 and is already reaping the benefits -- Tata Motors has zoomed past Honda to become the nation's fourth largest car manufacturer by sales. The automaker is targeting the third spot by 2019.

That's not all. Tata Motors is also driving down the electric-vehicle (EV) path, having beaten rivals to bag the first order for 10,000 electric cars from an India's Ministry of Power undertaking. Tata Motors has already supplied the first batch of its fully electric sedan, Tata TIGOR Electric, positioning itself to be a key beneficiary as India tests the EV waters. Were you aware, incidentally, that India is planning to go all-EV by 2030? 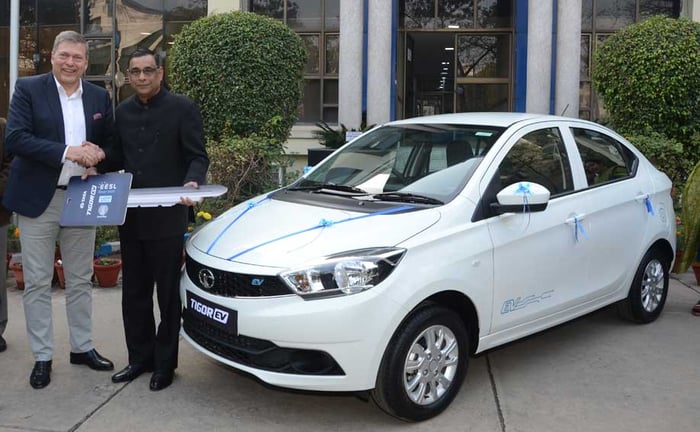 Meanwhile, Tata Motors continues to dominate 50% of the Indian medium-and-heavy commercial vehicles (CV) market. The CV market is in a sweet spot, especially after the Indian government's recent tax reforms that have removed bottlenecks in logistics and opened up the transportation sector. To give you an example, Tata Motors' domestic CV sales jumped 62% year over year in December.

I strongly believe Tata Motors is turning around and could emerge as one of the best growth stories in India in the coming years.

If you're a risk-averse investor, consider an India-based ETF that offers you maximum diversification among stocks listed in the nation. While all the three ETFs that I named earlier are great picks, going by their portfolio holdings, the iShares S&P India Nifty 50 might interest you the most, considering it's an index fund that tracks India's benchmark stock market index, the Nifty 50, that comprises of the 50 largest blue-chip stocks.

By buying this ETF, you can own a piece of some of the top-notch companies in India. As of Dec. 29, both HDFC Bank and Tata Motors were among the fund's top 15 holdings. Sector-wise, the fund had 26.3% exposure to financials (banks), and roughly 10.5% each to energy and technology. Overall, the iShares Nifty 50 fund has returned an incredible 55% total return, including dividends, in the past decade. As the Indian economy expands, so should its stock market, which makes this ETF the best bet for anyone just starting to invest in India.