Shares of Intel hit a 52-week high yesterday. Let's look at how it got here and see whether clear skies are ahead.

How it got here
Despite some rough patches and lowered guidance related to the Thailand floods last year that crippled the hard-drive industry and subsequently much of the broader PC market, Intel still delivered a strong fourth-quarter earnings release. Full-year revenue jumped 24% to $54 billion, with earnings per share rising 19% to $2.39.

Semiconductor players like Intel are a dying breed, as Chip King Kong is the last domestic player to still fabricate its processors in-house. That vertical integration is a key competitive advantage in a crowded industry, despite the capital intensity of the business.

It came as no surprise when IHS iSuppli released its estimates on the global semiconductor market in 2011 and Intel continued to sit in the No. 1 spot, notably growing its market share to the highest level in more than  a decade.

Fellow Fool Sean Williams even lays out why the company is so strong that it's right for your IRA. I agree with Sean here; Intel will be a long-term winner.

How it stacks up
Let's see how Intel stacks up with its peers. 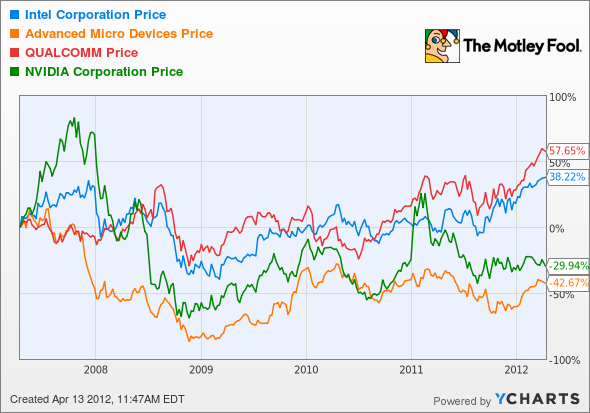 Let's look at some additional fundamental metrics for more insight.

AMD's return on equity is higher, largely because it's working with a smaller equity base and uses more leverage. It sports a debt-to-equity ratio of 2.1, higher than Intel's 0.55; AMD is taking on more financial risk.

Qualcomm enjoys Intel-esque dominance within the mobile-chip space and has a similarly strong record with dividend growth. NVIDIA competes in various ways, with its discrete GPUs against Intel's integrated ones, and Intel's new Medfield Atom mobile-bound chip will hope to take on both Qualcomm and NVIDIA.

What's next
Intel will be pushing its mobile strategy with Medfield to battle the ARM Holdings consortium. It's facing an uphill hill with adoption, but Intel can afford to wage a drawn-out war.

On the PC side, its newest Ivy Bridge chip architecture is on the launchpad and ready to take off in Apple Macs and Windows PCs alike this year.

Intel is cleared for take-off.

Interested in more info on Intel? Add it to your Watchlist.