I'm sorry I ever doubted you, Universal Display . I won't make that mistake again. Welcome back to my portfolio.

A trip down memory lane
The first time I picked up shares of UDC was in May 2010. This was before I was an official Fool, and I saw opportunity in the company as the leading intellectual-property provider for OLED technology, a theme that kept popping up in the tech world. Little did I know that our Rule Breakers service had recommended it five years prior.

I had a limit order in to buy shares at $12, which was promptly triggered during the "flash crash" on May 6 that left everyone scratching their heads. A few months later in July, UDC would see a re-recommendation from our chief Rule Breaker and Foolish co-founder David Gardner, leading to some self-back-patting on my part.

The next year would be a good one, albeit with incredible volatility. Here's a price chart starting from the fateful day my order got filled. 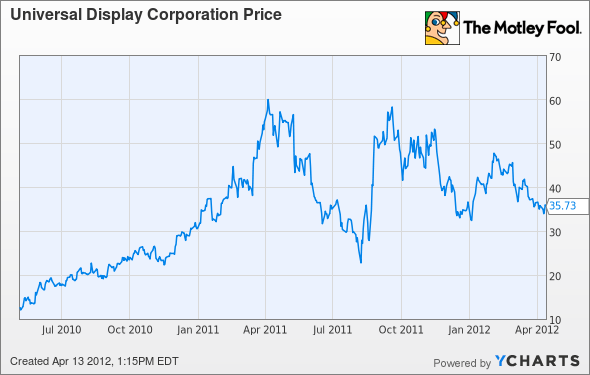 Within less than a year, I was enjoying a five-bagger as shares briefly topped $60.

Then, in June 2011, I got shaken out. Some dubious reports from the Far East (The Korea Times, specifically) claimed that UDC's largest suppliers, Samsung and LG Display , had successfully invalidated its patents in Japan. That seemed like a pretty serious threat to my thesis, as patent litigation is a major threat to any IP company.

At the time, I also had a somewhat itchy trigger finger generally. I was working at Charles Schwab on a team of brokers and trading specialists catered toward active traders, after all. I foolishly (lowercase "f") sold my shares near $42 -- still a respectable gain.

Less than three months later, I punched myself in the face when Samsung inked a long-term six-and-a-half year contract with UDC. LG similarly signed a short-term renewal last month.

With shares pulling back down over the past few months as UDC's business strengthens, I've decided to buy back my shares at $35 -- lower than where I sold. The market doesn't frequently give you a chance to make up for your mistakes, so I'm taking my mulligan while I can.

Why buy?
I've already listed out a handful of reasons UDC is a buy. The technology's benefits in power efficiency, flexibility, and improved display characteristics are validated by the fact that panel makers are investing heavily in OLED manufacturing facilities.

The South Korean conglomerate invested $4.4 billion in OLED factories last year, followed by another $6.2 billion planned this year. Sammy might even spin off its flailing LCD business just to focus on OLEDs. LG is planning on spending $3.5 billion for the same reason, about what it spent last year on OLED technology. They're clearly betting pretty heavily that this is the next generation of display technology.

Thankfully, UDC isn't the one on the hook for the capital-intensive manufacturing -- it gets to sit back and collect royalty and license fees while scaling its R&D spending. Here's a breakdown of revenue over the past three years as recurring material sales in particular take off. UDC's largest cost is R&D as it develops its IP. It's only mildly increased in dollar terms over the years, but it has substantially fallen as a percentage of revenue as its top line soars. 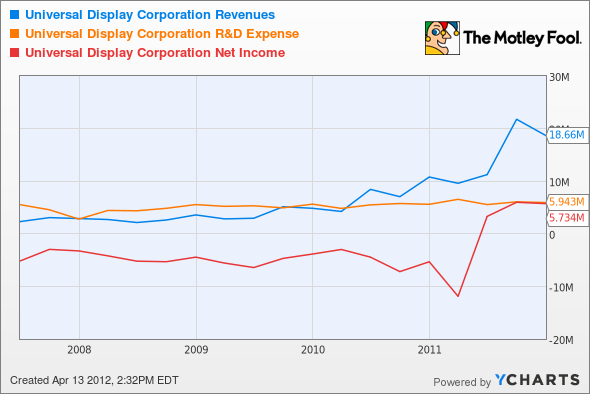 iCatalyst
One day down the road, I expect Apple to adopt OLED technology in iDevices. The Mac maker recently filed numerous patents for OLEDs, including one involving improved power efficiency and another on how they may be implemented in future iPads. Another three (all related to touchscreens) were uncovered more than a year ago, so you know it's on Cupertino's radar.

Meanwhile, Samsung is one of Apple's largest display suppliers. This is probably far down the road, but I still think it will happen eventually. It's a cherry on top of my current UDC thesis that will hopefully materialize in the future -- a potentially enormous cherry.

UDC actually bought a handful of OLED patents from Motorola about a year ago, and part of the deal had Motorola getting a small stake in the company.

The color of the weakest link
In fairness, there are some obstacles holding back wider adoption. Specifically, blue OLEDs have shorter lifespans (about 14,000 hours) than red and green ones do (46,000 hours to 230,000 hours). Manufacturing costs remain high, keeping prices high and holding back adoption. The high costs also present some supply constraints, which is one reason Apple can't adopt OLEDs quite yet.

Without a doubt, there are some kinks in the technology and hurdles to widespread adoption. I believe those challenges will soon be overcome and OLEDs will eventually become the standard for display technology, with UDC cashing in on the process.

Mobile displays are just part of The Next Trillion-Dollar Revolution. Get this new free report on another way to play the rise of smartphones and tablets. It's free.