Shares of Visa hit a 52-week high on Friday. Let's take a look at how the company got here and whether clear skies remain in the forecast.

How it got here
Visa, along with almost the entire credit card industry, has benefited of late from a surge in consumer spending -- especially when it comes to plastic. Visa, and its primary rival MasterCard , have both reported double-digit increases in revenue, as well as strength from Europe, a region considered problematic for many financial institutions.

There are two reasons in particular that Visa and MasterCard have performed so well despite global economic uncertainty. The first is that these two companies are merely credit transaction facilitators (i.e., they don't actually loan money to consumers). With no collateralized risk, Visa and MasterCard tend to boast healthy margins. This isn't to say Discover Financial Services and American Express aren't high-margin names, but these companies lend money in addition to processing transactions. This forces them to put money aside for loss reserves, which ultimately counts against their earnings potential.

The second reason Visa and MasterCard have done so well relates to their push into emerging markets. Third-world economies remain a largely untapped resource for credit processors and a top priority for their global growth strategy.

How it stacks up
Let's see how Visa stacks up next to its peers. 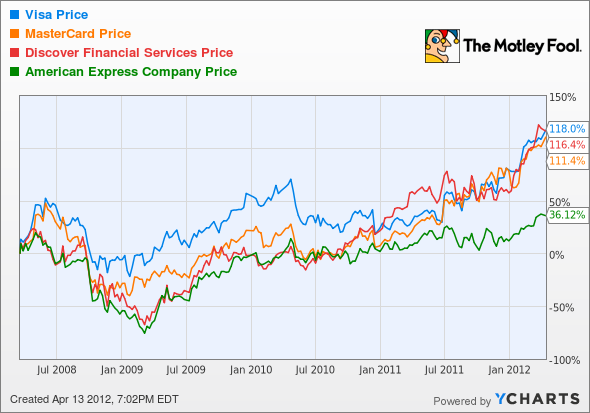 And there was much rejoicing! Shareholders in all four of these companies have had a nice run over the past couple of years.

Just as we've witnessed recently with retail, there's a premium to be paid for high growth rates and a lack of collateralized risk. Based on these metrics, Discover and American Express look remarkably cheap. Then again, with MasterCard and Visa generating strong cash flow, it's hard to argue that their valuations are unsustainable, despite being much higher than Discover and AMEX. In this rare instance I've determined that the entire sector is currently an intriguing value and think these stocks are the dividend juggernauts of the future.

What's next
Now for the real question: What's next for Visa? That question really depends on whether a global slowdown is actually capable of slowing down credit card processing companies like Visa. If its resilience in Europe is any indication, there isn't much standing in Visa's path to new 52-week highs.

Our very own CAPS community gives the company a four-star rating (out of five), with an overwhelming 95% of members expecting it to outperform. I lump myself among the 4,734 members who have made a CAPScall of outperform on Visa and am up eight points since that call. Considering Visa's fairly recent dividend increase, its $500 million share repurchase program, and the 19% increase in international transactions that it reported last quarter, I see nothing that would indicate Visa's growth is ready to slow. This is one triple-digit price tag I think can head even higher.

Craving more input on Visa? Start by adding it to your free and personalized Watchlist. It's a free service from The Motley Fool to keep you up to date on the stocks you care about most.