While still down from its 52-week high set on April 2, the Dow Jones Industrial Average remains up more than 20% from its 52-week low set back in October. Here's an earnings report that could affect the Dow today, and an overview of markets worldwide.

American Express' earnings will come a day after Goldman Sachs posted $3.92 in earnings per share, beating analyst expectations of $3.55. Goldman also raised its dividend from $0.35 per share to $0.46, and its stock gained 0.74% yesterday.

Economies elsewhere
Yesterday, European markets cheered on the International Monetary Fund's improved global economic forecast, as well as high demand from a Spanish government bond auction. The FTSE 100 gained 1.78%. The IMF's report projected the euro area to contract by 0.3% in 2012, better than the 0.5% contraction projected in its previous report. Markets will continue to watch news surrounding Spanish debt, as any negative news could scare off investors.

Further in the week
More data on jobless claims will be released on Thursday. The market expects a slight decrease in initial jobless claims from 380,000 to 375,000, and an increase in continuing claims from 3.25 million to 3.27 million. The economy has yet to reach pre-recession levels for initial claims: 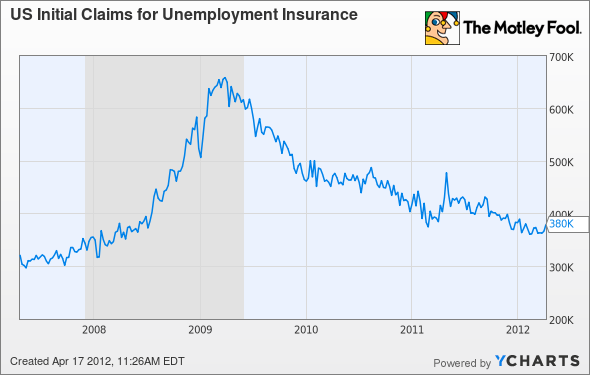 Also released Thursday is March data on existing-home sales, which the market expects to slightly increase to 4.62 million from February's 4.59 million. Housing is looking for any good news, as the builder sentiment index, which blends together information on current sales, expectations, and buyer interest, fell to 25 for March from 28 in February. Nevertheless, Home Depot rides the market's expectations that poor home sales can be balanced by more home improvement, and its stock price flirts with its 52-week high.

In the long-run
Every bit of news might nudge the stocks up or down for one day, but that doesn't mean much for long-term investors looking to outperform the market. A solid company pays no attention to the everyday changes in share price but instead looks for long-term value creation. To reveal three such solid stocks that will help you construct your retirement portfolio, along with the habits needed to build wealth far into the future, read our free report: "3 Stocks That Will Help You Retire Rich." It's free!