Private equity hasn't gotten a lot of respect lately. If it's not manufactured controversies over Mitt Romney's former employment, it's more general complaints levied at fat cats making big deals that benefit few beyond the fat cats themselves. Market grumblings are reaching a high point now with the planned Carlyle Group IPO, as many savvy commentators -- including the Fool's own John Maxfield -- point out that private equity firms tend to go public only when their biggest growth periods are behind them.

But these aren't just savvy operators with massive war chests. Private equity firms employ some of the best and brightest financial minds in the industry. They can analyze economic trends small and large in ways the average individual investor could only dream of. When a firm goes public, it may be more than a cash grab; it may be a signal that there's a rough ride ahead for market participants.

Private goes public
Most private equity firms are still private, but there are a handful that have gone public -- and all somewhat recently. The trend started with Goldman Sachs , which identifies itself as an investment bank, although it has managed significant private equity operations over the years. After playing a major role in the dot-com bubble, Goldman went public in May of 1999, near the bubble's peak. Over the next three years, Goldman would see slightly positive (if volatile) returns, but the broader market suffered. 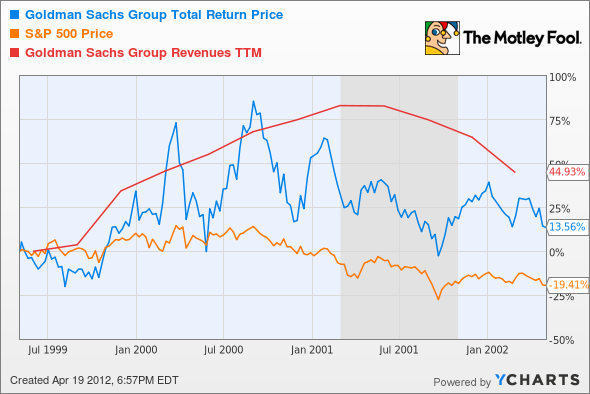 The timing couldn't have been better. With far fewer speculative dot-com companies to take public after the crash, Goldman had to shift gears. Revenues suffered, but paydays didn't. Jon Corzine, at Goldman's helm during the IPO, made more than $300 million -- later used to finance his political ambitions in New Jersey.

For a while there was little competition in the publicly traded private-equity arena. The market recovered from its doldrums and made for new heights. The Dow hit all-time highs in 2007, just as a pair of major private equity firms prepared to go public.

Second verse, same as the first
Fortress Investment Group had its public debut on Feb. 9 of the market's peak year, and private-equity titan Blackstone Group followed in June. I shouldn't have to tell you what happened in the following years. If you'd like to know the specifics, here's what went down: 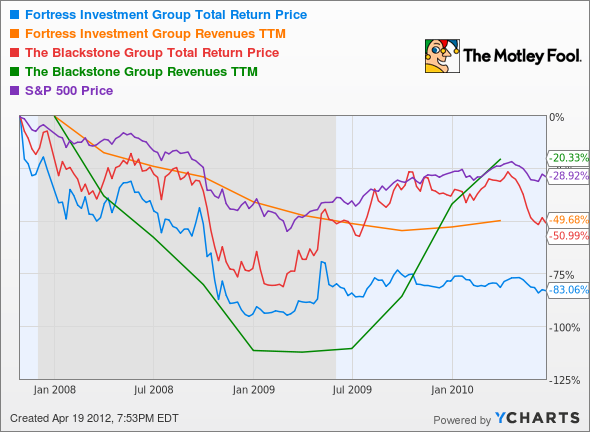 The new crew couldn't even muster a Goldmanesque outperformance in the three years following its debut, drastically underperforming even the anemic results of the index. The S&P 500 still hasn't recovered to its 2007 heights. It has made some impressive gains for those savvy investors who jumped in two years later, but if you're following the pattern shown here, that may not last. Another wave of private equity IPOs crashed ashore beginning in 2010.

Are things different now?
The Kohlberg Kravis Roberts IPO in mid-2010 stands out from this pack for arriving relatively early in a period of growth. Not only did the index boom after KKR went public, but KKR's stock was a notable outperformer: 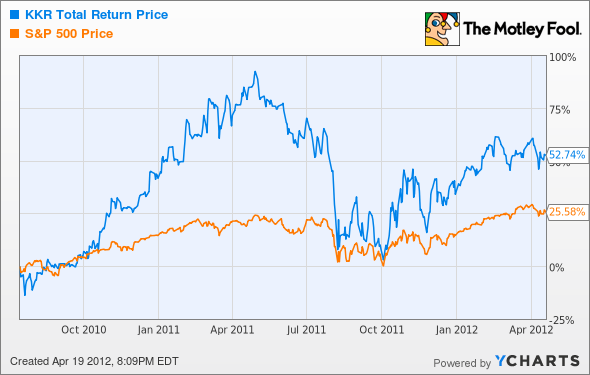 But when Apollo Global Management had its turn at bat, you could hear the whooshing sound clear out to New Jersey as the company's stock whiffed. While the index Apollo now lags is barely in the black for that post-IPO period, a few bad days ahead will make this yet another negative stretch: 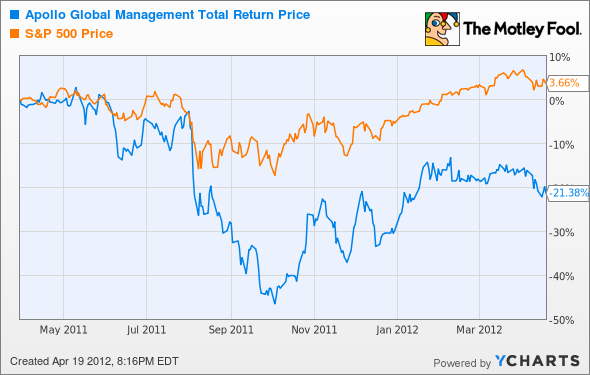 All told, Goldman, KKR, Blackstone, and Apollo together make four of the top six private equity firms ranked by fundraising total in Private Equity International's PEI 500. When Carlyle Group goes public, it will be the fifth of six. The one remaining holdout is TPG Capital, based in Texas. Only KKR has done well for its investors while also enjoying a broader market improvement. That either represents KKR's superior ethics or betrays its poor timing; the firm was one of the major buyout players pre-crash and could have enjoyed some major market interest thanks to two 11-figure buyouts -- one in 2006 and one in 2007.

What lies ahead
Will Carlyle's IPO herald a new period of growth a la KKR? Or will the market's reactions come full circle as Carlyle heralds a new bear market and a return to the old private-equity-goes-public norm? That's a question serious investors should ask themselves as they survey the market and the broader macroeconomic trends that often move it. Remember, these are some of the savviest professional investors around. When they sell, it's usually for good reason.

Private equity may be cashing out, but other smart investors are still looking to cash in -- and you can ride their coattails to market-beating returns. Find out what greats like Warren Buffett are buying right now in The Motley Fool's free report on "The Stocks Only the Smartest Investors Are Buying." You'll even get the opportunity to discover a promising stock flying under Buffett's radar. To find out more, click here for your free copy of this important report.