Please ensure Javascript is enabled for purposes of website accessibility
Log In Help Join The Motley Fool
Free Article Join Over 1 Million Premium Members And Get More In-Depth Stock Guidance and Research
By John Reeves, and Ilan Moscovitz - Jun 3, 2013 at 10:59AM

Countless studies have shown that the forecasts and stock recommendations of sell-side analysts are of questionable value to investors.

It is difficult to get a man to understand something, when his salary depends on his not understanding it.
-- Upton Sinclair

When Apple announced its second-quarter earnings on April 23, a flurry of news reports cited Wall Street analyst forecasts to help explain the company's results. This is how the bottom lines of companies and stocks are ordinarily explained to the public.

An analyst from Goldman Sachs (GS -1.99%) noted that the March quarter was better than expected, but the June quarter guidance was "far worse than feared." He ultimately lowered his price target to $500 from $575, while maintaining a "buy" recommendation on the stock.

An analyst from JPMorgan (JPM -1.71%) also lowered his target price, in this case to $480 from $575, and advised he expected "AAPL to remain range-bound" until there was more visibility into new product launches. More bullishly, the analyst from Piper Jaffray felt Apple might trade higher in late 2013, and maintained his $688 price target and "overweight" rating.

Analyst opinions such as these routinely drive coverage of the stock market. But a new study, "Inside the 'Black Box' of Sell-Side Financial Analysts," by professors Lawrence Brown (Temple University), Andrew Call (Arizona State University), Michael Clement (University of Texas), and Nathan Sharp (Texas A&M), suggests that ordinary investors should look elsewhere for insights into their favorite companies.

Sharp and Call, who we interviewed about their findings, told us they wanted to understand what went on behind closed doors when analysts were putting together their research. The professors received completed surveys from 365 sell-side analysts, and later followed up with 18 of them to better understand their decision-making processes. "Sell-side" analysts produce research that's purchased by their firms' "buy-side" clients. They're the group that's often cited in stories about "Wall Street analysts."

Countless studies have shown that the forecasts and stock recommendations of sell-side analysts are of questionable value to investors. As it turns out, Wall Street sell-side analysts aren't primarily interested in making accurate stock picks and earnings forecasts. Despite the attention lavished on their forecasts and recommendations, predictive accuracy just isn't their main job.

Analysts are not that into you
Any time you want to really understand the financial industry, it's helpful to first look at what people are actually paid to do.

The survey found that "accurate earnings forecasts and profitable stock recommendations have relatively little direct impact on their compensation." Instead, industry knowledge and connections are what count.

The chart below ranks the main factors that play into analyst compensation: 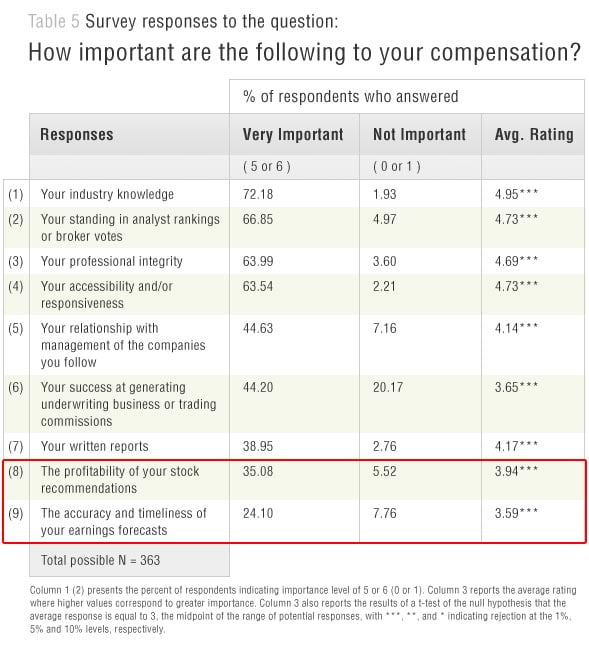 Sharp and Call told us that ordinary investors, who may be relying on analysts' stock recommendations to make decisions, need to know that accuracy in these areas is "not a priority." One analyst told the researchers:

The part to me that's shocking about the industry is that I came into the industry thinking [success] would be based on how well my stock picks do. But a lot of it ends up being "What are your broker votes?"

A "broker vote" is an internal process whereby clients of the sell-side analysts' firms assess the value of their research and decide which firms' services they wish to buy. This process is crucial to analysts because good broker votes results in revenue for their firm. One analyst noted that broker votes "directly impact my compensation and directly impact the compensation of my firm."

So who are these clients that analysts are paid to cater to? Mainly hedge funds and mutual funds. Individual -- aka "retail" -- investors are the least important: 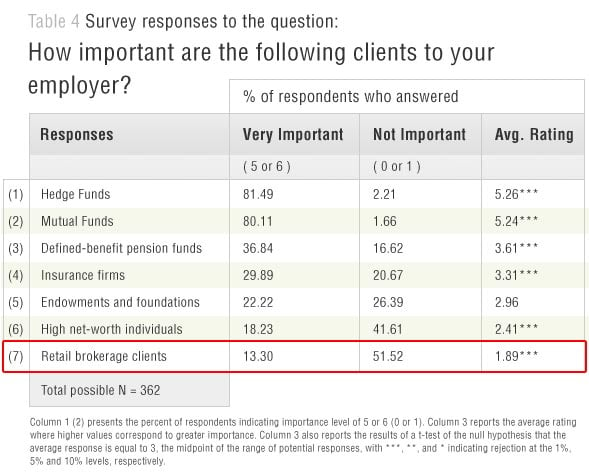 Congratulations on another great quarter, Mr. CEO
So if forecasts and stock picks aren't important, what exactly are these valuable institutional clients after?

Sharp and Call told us that institutional clients value analysts' access to the management of the companies they cover more than anything else. One analyst admitted that "one of the biggest things the buy-side compensates sell-side research firms for is corporate access: road shows, meetings, access to management teams." Another said:

As an analyst, if I call up a money manager, a hedge fund, whoever, and I've got a call to make on a stock, and I'm able to say, 'Hey, by the way, we were able to spend 20-30 minutes talking to senior management,' boom! Their ears are just straight up.

Overall, the study found that buy-side clients valued sell-side analysts' views more when analysts had direct contact with management. The study didn't go into detail about whether clients were primarily after hints of short-term market-moving information, or whether they were seeking more insight into company results. But Sharp told us he suspects analysts' institutional clients believe the most valuable insights are those that come directly from management.

Given the importance of providing their clients with access to corporate management, it only makes sense that sell-side analysts would want to maintain good relations with management. Sharp told us that "analysts are a lot more worried about maintaining their relationship with management than whether or not they're doing a good job, so-to-speak, for smaller investors." Maintaining strong relationships with management of the companies they follow is seen by analysts as central to their career success.

All of this appears to call into question the objectivity of the analysts. One analyst even mentioned that he saw himself as a "megaphone" for management. In our interview, Sharp raised the question, "are analysts really supposed to be merely broadcasting what management tells them?"

Because maintaining good relationships with management is so crucial, being cut off from management would be devastating. According to Sharp and Call, it would hurt their relationship with buy-side clients who expect them to provide access to management, and losing that access would also get them into trouble with the sales and marketing folks at their own firms. One analyst told them:

When a company cuts you off, not only do you lose the information value of that [access], but you actually lose revenue. The company won't come to your conference; therefore, your conference is going to be less important. Clients pay a boat load for that access.

Another analyst said that, "there are a lot of constituencies that analysts have to answer to, and none of them likes an underperform [rating on a stock]."

In addition to the pressure to remain in good graces with the management of the firms they cover, analysts often receive pressure to make positive recommendations from their own firms.

According to the study, 23.9% of the analysts surveyed specifically say they are pressured to "issue stock recommendations that are more favorable than their research would support." And Sharp told us that number is probably a floor, since analysts may have been reluctant to share such knowledge with outside parties. He added that it'd be a "fantasy" to believe that sell-side analysts are not influenced by the effect their recommendations might have on the profitability of their own firms.

In short, analysts provide management with a "megaphone" in exchange for access, which they are then able to sell to hedge funds, mutual funds, and other institutional investors.

The next pets.com
In the 1990s, gushing Wall Street "research" that awarded every half-baked business idea with a "strong buy" recommendation was a major cause of the $5 trillion dot-com bubble. Even stocks that analysts privately believed to be "dogs" and "pieces of [expletive]" received buy recommendations.

Eliot Spitzer, who prosecuted the investment banks, recalls that:

At that time, the investment banks' defenses were as astonishing as they were revealing. First, they claimed "everybody knew" that analysts' recommendations were worthless because of the enormous hidden conflicts -- admitting that no rational, knowing person would rely on the advice investment banks were sending to tens of millions of small investors.

One of the many troubling parts in the 2012 "JOBS Act" -- a law that weakens IPO standards in order to drive more IPOs -- was a provision (Sec. 105b) that makes it legal for analysts to accompany investment bankers who are trying to persuade companies to hire them to help them come public.

We think "Inside the Black Box" raises particularly troubling questions about the objectivity of analysts whose firms are underwriting IPOs. As Ilan mentioned last year in his Senate testimony on the IPO market, there's a strong likelihood that part of the reason investment banks would bring analysts to sales pitches is to indicate to management that the sell-side analysts will generate favorable "research" on their company.

The fact that 80% of analysts surveyed said their success at generating investment banking revenue was important to their own compensation, and 44% said it was "very important," appears to call into question whether Wall Street firms are abiding by the spirit of the settlement.

The JOBS Act also required the SEC to study the idea of having small-cap stocks trade in non-penny increments. Doing so may actually turn out to be a good idea if it results in a longer-term focus for investors and management and more capital for companies. But one of the other rationales -- raising transaction costs for everyone including ordinary investors in order to juice "trading commissions that formerly helped to fund research analyst coverage" -- seems dubious in light of what we now know about the black box of research analyst coverage.

The impossible dream
In "Moneyballing the Financial World," Motley Fool co-founder David Gardner wrote that he dreamed of a day when every financial source tracks itself publicly and transparently. For David, an analyst's track record matters a lot to an ordinary investor who might be considering that analyst's opinion before buying or selling a stock. It's only common sense to insist on a track record for an analyst's investing recommendations, once you stop and think about it.

Alas, common sense ain't all that common, especially on Wall Street. After examining this study, we've learned that sell-side analysts are not incentivized to care terribly much about their track records, and are far more focused on pleasing their clients by maintaining good relationships with the management of the companies they cover. That's fine, of course, but retail investors should keep this in mind the next time they hear a Wall Street analyst increase or decrease a price target on a particular stock.

In the end, we suspect that sell-side analysts won't be taking up David Gardner's challenge to track their forecasts and recommendations. Under the current circumstances, why would they bother? We greatly encourage all investors to read "Inside the Black Box." You'll never look at a Wall Street analyst quite the same way again.

Why Target’s Bad Day Rained on Hasbro
Where the Money Is: August 22

Déjà vu All Over Again: The 55 Greatest Wall Street Apologies of the Past 15 Years
How Goldman Sachs Now Thinks About Its Reputation
4 Stocks Making Moves