Shares of El Paso hit a 52-week high yesterday. Let's look at how it got here and whether clear skies are ahead.

How it got here
The obvious thing to point to for El Paso's new highs this year is the pending acquisition by Kinder Morgan . The pipeline titan is buying El Paso for a deal that is valued at $38 billion.

The recent move has little to do with earnings in the first quarter, when profit rose 39%. It has more to do with the rise in Kinder Morgan's price and the structure of the deal. Shareholders had three options in the buyout -- a $25.91 cash payment, $14.65 in cash and 0.4187 share of KMI, or 0.9635 share of KMI. At its current price, the last option represents $34.10 per share for El Paso, so it's no surprise that El Paso's share price has largely mirrored Kinder Morgan in recent months. 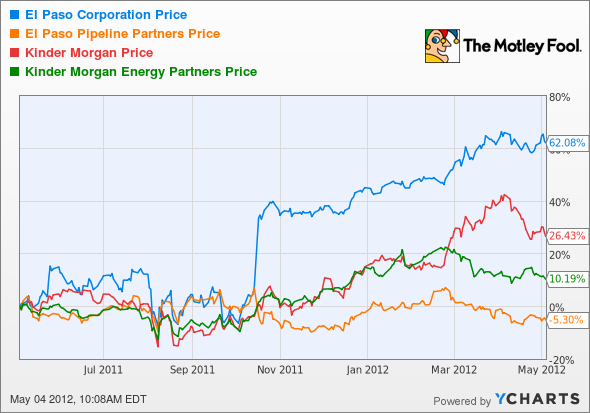 El Paso Pipeline Partners and Kinder Morgan Energy Partners are subsidiaries of the two respective companies, and assets will be pushed down to these tax-advantaged units in the future.

Clearing hurdles
Part of the gain recently has been due to hurdles passed by the companies on their way to a merger. El Paso announced a deal to sell its exploration and production company for $7.15 billion. The Federal Trade Commission also approved the deal on the condition that Kinder Morgan sell three U.S. natural gas pipelines. This clears the way for an acquisition that will probably take place during the second quarter.

What's next?
The rise in Kinder Morgan's price is driving El Paso higher, and as the deal moves closer their values will converge. Since there were three buyout options for shareholders, it makes the trade a bit more complicated, but shares should continue to move higher and move closer to 96.45% of the price of Kinder Morgan's shares. El Paso shareholders have until May 23 to decide which buyout option they want, and at this point there is no point in choosing anything but stock.

For those so inclined, there is also an arbitrage trade available by going long El Paso and short Kinder Morgan into the buyout.

Interested in reading more about El Paso? Click here to add it to My Watchlist, and My Watchlist will find all of our Foolish analysis on this stock.